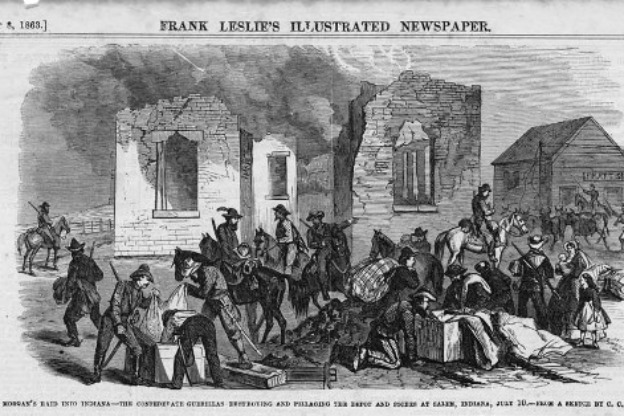 In the summer of 1863, Captain John Hunt Morgan and his squadron were ordered on a raid into Kentucky to slow the Union advance. Against orders, Morgan and his men crossed the Ohio River (the troops and their horses on two captured steamboats) into southern Indiana on the night of July 8.

Beginning the morning of the 9th, Morgan and his troops rode and raided their way through several Hoosier towns and then continued into Ohio, as Union troops pursued, until the Confederate squadron surrendered on July 26.

Attia Porter was a young woman living in Corydon, Indiana at the time of Morgan’s Raid. In a letter to her cousin, Private John Andrews, serving in the 43rd Indiana Infantry Regiment in Arkansas, she wrote about the day “a visit was paid to the citizens of Corydon and vicinity by Morgan and his herd of horse thieves.”

At one point in her letter she seems to make light of the Indiana home guard who tried to defend against Morgan’s superior numbers:

Our home guards skirmished with the rebs from the river to Corydon . . . . The battle raged violently for thirty minutes, just think of it! And on account of the large number of the rebs we were forced to retire which our men did in good earnest every one seemed determined to get out of town first . . . . I don’t want you to think I am making fun of our brave home guards for I am not in the least. But now, that all the danger is over, it is really funny to think how our men did run.

Porter also wrote more seriously of how her father had gone to fight, of the untrue rumors that he had been shot, and of the three Hoosier men who died defending their towns and homes:

I think that was the awfullest day I ever passed in my life. The rebels reported around that they shot father because he would not surrender, but it was all a story. . . . We killed six or eight of theirs and wounded twenty five or thirty. I expect you are tired of hearing about Morgan so I will stop.

A Moment of Indiana History is a production of WFIU Public Radio in partnership with the Indiana Public Broadcasting Stations. Research support comes from Indiana Magazine of History   published by the Indiana University Department of History.