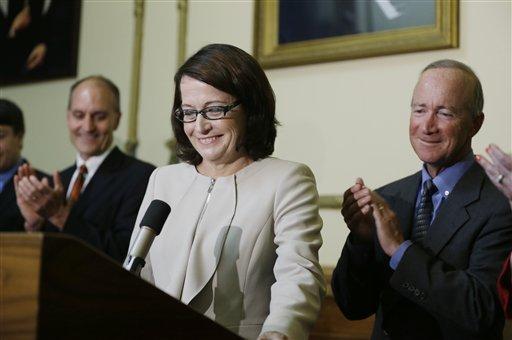 Loretta Rush is introduced as the new Supreme Court judge by Gov. Mitch Daniels, right, at the Statehouse Friday, Sept. 14, 2012, in Indianapolis.

In 1922, Florence Ellinwood Allen became the first female justice of a state supreme court. While Allen’s election was a coup for the state of Ohio, it was not until 1995 that Indiana would see a woman sitting on its highest state court.

Myra C. Selby served as an associate justice on the Indiana Supreme Court from 1995 to 1999, authoring more than one hundred of the court’s majority opinions, including cases on state property taxes, insurance reform, and tort law reform. Not only the first woman, but the first African American to sit on the court, Selby now works as a partner at the Indianapolis law firm of Ice Miller.

It would be more than a decade before another woman would sit on the Indiana Supreme Court.

After Selby’s term ended, Indiana was one of only three states without a woman on its highest court, until December 28, 2012, when Loretta Rush was sworn in as Indiana’s newest associate justice. A graduate of Purdue University, Rush received her law degree from Indiana University, worked as a lawyer in Lafayette, and since 1991 had sat as a superior court judge in Tippecanoe County. Rush came to the state’s high court with an extensive background in family and juvenile courts, and as chair of the Indiana Juvenile Justice Improvement Committee.

Although their presence is new, Selby, Rush, and their female successors write the first chapters of the history of women on the Indiana Supreme Court.