The Second Statehouse: From Greek Revival to Greek Ruin

Indiana's ill-fated second statehouse was acclaimed as “’the nearest approach to the classical spirit of the antique yet instanced in the Western hemisphere’”. 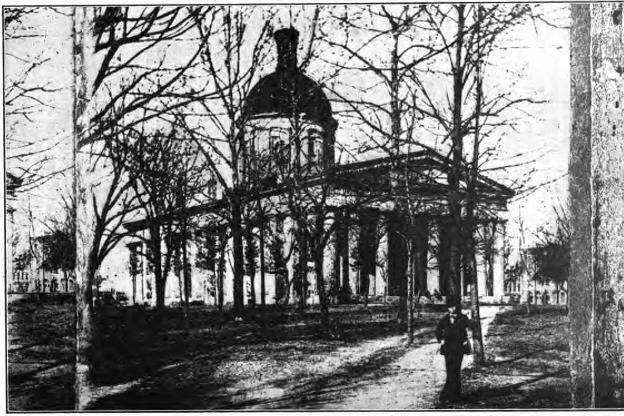 The Indiana statehouse as it appeared in 1860, before being demolished in 1877.

In 1831, Indianapolis, the state capital, had only been in existence for ten years and was little more than a “struggling frontier village.”

It had been chosen for its central location, but most of the state’s population was still settled to the south, near the Ohio River. The capital city’s population was a mere 1,500 in 1830—not counting the legislature when it was in session each winter—and there was only one public building of importance, the Marion County Courthouse.

The state legislature had been meeting at the courthouse, but decided in 1831 that the time had come to erect a proper statehouse.  Commissioner James Blake placed advertisements in local, regional, and national newspapers with specifications for the buildings and offering a prize of $150 for the best plans. Architects from across the country competed for the commission; in December, Blake presented twenty-one plans from sixteen architects to the General Assembly.

All of the top five contenders (from New York, Philadelphia, and Washington) submitted designs in the Greek Revival style, not surprising considering the academic fascination for ancient Greece and Rome and the mode among prominent architects to model buildings after the classical styles. In January 1832, the General Assembly awarded the prize to the New York firm of Town and Davis for its design modeled on a Greek Doric temple, vaguely resembling the original Parthenon, with a Renaissance dome centered on the top.

The design was similar to that of the Connecticut statehouse, with two halls for the legislative branches and a central rotunda. Both the “Representatives’ Hall” and the “Senate Chamber” were semicircular two-story auditoriums. The Supreme Court chamber was adjacent to the rotunda—probably on the second floor—and, oddly, there was no governor’s office in the winning design.

The building’s exterior walls were brick, with a brick and limestone foundation. Laths covered the brick walls, which were then given two coats of stucco treated to look like stone. The structure was wood frame, with wood ribs for the dome and a wooden cupola. The roof and dome were covered with a veneer of zinc.

The building was completed a year ahead of schedule, in December 1835, at a final cost of about sixty thousand dollars.

The completed structure engendered mixed feelings among both Hoosiers and out-of-state architectural critics. One New York magazine called the design “‘the nearest approach to the classical spirit of the antique yet instanced in the Western hemisphere’”.

At first, the local press was congratulatory, but by the 1860s tastes had changed. The Renaissance dome and the Greek Doric building were seen as an unattractive architectural union.

Even worse, however, was the sad shape of the structure. The exterior stucco had failed in rough Indiana winters, causing the capitol to resemble a Greek ruin. The interior had also proved unstable; in 1867, the ceiling in “Representatives’ Hall” collapsed—fortunately, when no one was present. The episode so alarmed legislators that they commissioned a new capitol.

The second statehouse was demolished in 1877, just forty-two years after its completion.

The ill-fated statehouse left a noteworthy legacy, though: it brought Greek Revival architecture to Indianapolis, and inspired a host of imitations from the 1830s through the early 1850s. Its design and construction established a fledgling architectural profession in the city.

But perhaps most importantly, it was the first major public building erected in Indianapolis, and its “construction demonstrated the confidence of the state’s leaders in the future of the state capital and its potential to become a bona fide city”.