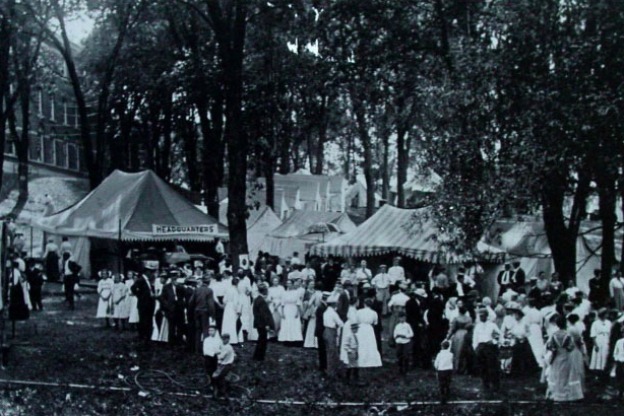 Traveling Chautauquas provided edifying entertainment for a rural population at a time when few other options existed.

In the late 19th and early 20th centuries, many Midwesterners, Hoosiers among them, spent pleasant summer weeks at a chautauqua. Many permanent chautauquas were built along lakefronts, where residents could enjoy cool breezes and recreational activities while they attended lectures and concerts. One of the most popular in Indiana was Winona Lake, which, like many other such communities, boasted a strong religious as well as cultural component.

For those who enjoyed neither the time nor the funds to leave their homes in the midst of the summer, there were traveling chautauquas, which specialized in performances in small towns and rural areas, where residents often had little exposure to cultural entertainments.

Companies like the Community Chautauqua provided something of the experience of summering at a permanent resort in a condensed form. Tents would be set up for three or five day periods and each day the company would offer an afternoon program and an evening program, each about two hours long. Winks later described programs which contained a variety of offerings: music by an Italian band “resplendent in bright uniforms”; speeches by ministers and other speakers on topics of the day or general motivational talks (such as “A Brighter Tomorrow”); vocal music by a trio or a quartet; as well as recitals of poetry and literature. In between the performances, a song leader lead the audience (in the Midwest, mostly Protestant) in favorite hymns or folk songs.

Winks and his companions followed circuits that went through Ohio, Indiana, Illinois, and Michigan, and sometimes south into Kentucky and Tennessee. Winks left his job at the end of the summer of 1922—as more people owned automobiles and radios and could spend evenings in motion picture theaters, the days of the traveling Chautauqua were almost over. But many years later, as an adult, Winks could still recite “The Shooting of Dan McGrew” and sing songs from the operettas that he had heard as a young man on the Chautauqua circuit of the Midwest.