Political Suicide On The Fourth Of July

A well-respected lawyer was almost run out of Salem, Indiana for a Fourth of July address advocating for a property tax increase to support public education. 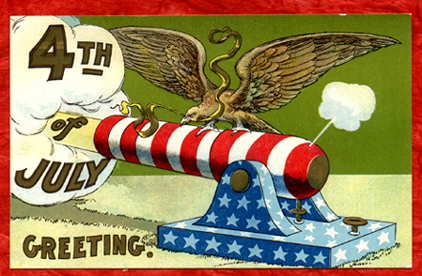 A political spat emerged out of a proposed topic for a Fourth of July address in Salem, Indiana in 1826.

It has been said that Hoosiers, more so than other Midwesterners, love their politics. And those same Hoosiers, it is also said, love even more a good political spat. Lawyer John Hay Farnham, Massachusetts-born and Harvard educated, discovered that truth at his own peril on the Fourth of July, 1826, in Salem, Indiana.

Farnham had moved to Salem with his wife and family to practice law. He was said to be a brilliant lawyer, a writer and speaker so talented that members of the state General Assembly hired him to write their speeches. He brought with him his large personal library, and was generally acclaimed in his new hometown as one of its brightest and most talented residents.

Indeed, when a local committee began to look for someone to give the annual Fourth of July address for the 50th anniversary of American independence in 1826 – a great honor for any citizen – the men of Salem chose John Hay Farnham.

Farnham presented but a single condition for his acceptance — that he be allowed to speak in favor of raising public revenues (via a tax) to support a common school system in Salem. Farnham must have been less than impressed by the few, scattered schools available in frontier Indiana.

The committee, in turn, was less than impressed with Farnham’s choice of topic. One Salem resident remembered, many years later, that committee members tried to convince Farnham “that the advocacy of such a policy would create a sentiment against him, because, as the committee thought, it was not in harmony with the doctrine of democracy.”

Farnham persisted. He delivered his Fourth of July speech, only to discover that the committee members were right. Farnham became “very unpopular for a time” and was “almost ostracized” because the residents of Salem “could not see the justice of taxation of their property for the education of the children of those who had no property for taxation.”

Farnham was eventually taken back into the good graces of the community. There is no record that he ever lobbied again for common schools, but his interest in learning was again demonstrated in 1830, when he became one of the organizers of the Indiana Historical Society.

Farnham never lived to see the public school system that did arise throughout the state – he, his wife, and four of their six children died in a cholera epidemic in 1833. He is memorialized, appropriately, on his tombstone as “a devoted friend to the interests of the West.”