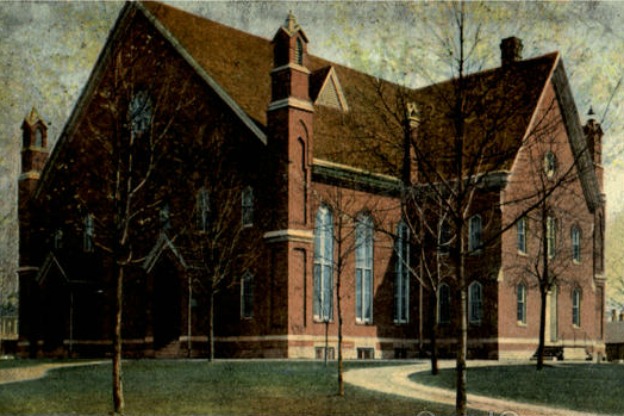 1906 postcard view of the Indiana Yearly Quaker Meeting House in Richmond, Indiana, which replaced the meeting house British abolitionist John Candler would have visited, but has since been demolished. Quaker settlers began settling in Wayne County as early as 1806 and they incorporated the community of Richmond in 1818.

In September 1853, English Quaker John Candler and three of his fellow Friends docked in Halifax, Nova Scotia, to begin a tour of the United States promoting the abolition of slavery. During their months of travel, they would visit 26 states, North and South, and meet fellow Quakers, state governors and other politicians, and Americans who fed and sheltered them as they made their way through the country. Candler described their trip in letters to his wife Maria, who had remained in their home in Chelmsford.

By late October, Candler and his companions had arrived in Cincinnati, and from there they headed north to Richmond, Indiana, a town with a strong Quaker presence. Candler was greatly impressed by the Richmond Meeting which he described as “very large, more than 350 persons present.” After several days of hospitality at the home of Elijah Coffin, they headed westward toward the state capitol. Candler wrote to Maria that they were “passing away into provinces far remote” and could expect to find few large, or small, gatherings of fellow Friends from then on.

On arrival in Indianapolis, Candler wrote about his favorable impressions of the “young and vigorous city.” He noted the eight railroads radiating out and a statehouse “worthy of a large province”; he also praised the surrounding rich farmland “loaded with plenty.” On the subject of slavery, however, Candler was in a state of shocked disapproval: “The legislature of this State have lately altered its constitution, which now forbids any colored person, not already naturalised, from ever settling in it!” and he ended his sentence with an exclamation point.

Candler was correct – the revised 1851 state constitution’s Article XIII prohibited free African Americans from moving to Indiana and settling there. The Quakers were even more discouraged after their visit with Governor Joseph Wright. He was a polite host, inviting the men to dinner at his home, but was adamantly against the abolition of slavery and utterly opposed to allowing free blacks to live in Indiana or anywhere else in the United States. Candler recorded that Wright was a firm supporter of colonization, i.e., sending all blacks to Liberia—an increasingly popular idea among northerners who opposed the institution of slavery per se but remained equally opposed to any rights for African Americans.

“The Americans as a nation,” Candler wrote, “have very unsound views of what they ought to do and what to leave undone . . . Liberia, however good as a colony, will never lead of itself to the abolition of slavery, or serve as a home for the slaves of the Southern states, and it is a perfect delusion to imagine that it ever can be so.” The four men continued their journey westward, stopping to visit a small Quaker Meeting in Terre Haute before setting off across the Illinois prairie.

John Candler, like so many other Quakers in England and America, continued to argue and work for abolition. Indiana retained its legal discriminatory stance against African Americans decades after the end of the war. In 1865, the General Assembly voted down an attempt to remove Article XIII from the constitution; the legal status of the article was struck down by the state supreme court the next year, but it was not until 1881 that the text was finally and officially removed from Indiana’s constitution.