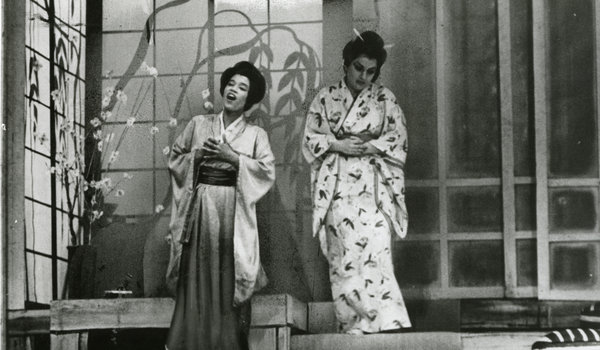 Camilla Williams, left, as Cio-Cio-San and Margery Mayer as Suzuki in Madama Butterfly.

On May 15, 1946, a young African American woman took the stage of the New York City Opera to sign the title role in Puccini’s Madama Butterfly. Camilla Williams became the first black woman singer to appear with a major national opera company, nearly ten years before Marion Anderson made her publicized debut at the Metropolitan Opera.

Williams went on to sing other major roles with the New York City Opera, taking on leads in two other Puccini operas, Pagliacci and La Boheme. When the company offered its very first performances of Verdi’s great opera Aida, it was Williams who sang the title role. In the 1950s, she sang the role of Bess in the first full-length recording of Gershwin’s Porgy and Bess and launched an international career that took her to South America, Europe, Africa, and Asia.

Williams visibly supported the civil rights movement, notably singing at the 1963 March on Washington D.C. before Martin Luther King Jr. spoke and at the ceremony where Dr. King received the 1964 Nobel Peace Prize. After her retirement from the opera stage in 1971, Williams began to teach, and her teaching brought her to Indiana University in 1977, where she became the first African American professor of voice at the IU School of Music.

Camilla Williams became a beloved teacher and mentor to her students, many of whom went on to distinguished singing and teaching careers of their own. After her death in January 2012, she was mourned by her university, by the Bloomington community, and by many friends and admirers in the music world, and she was remembered by The New York Times as a “barrier-breaking opera star.”