During his lifetime (1849–1916), James Whitcomb Riley was one of the most popular poets in America. Now more than 100 years after his death, Riley remains one of the most famous literary figures from Indiana. James Whitcomb Riley: Hoosier Poet explores his lasting legacy and the personal and professional challenges and successes he experienced as he became a beloved literary icon. Watch the full program:

The documentary examines Riley’s early life in Greenfield, Indiana, and reveals how it influenced his writing. Some of his most famous poems, including “The Barefoot Boy,” “The Old Swimmin’ Hole,” “The Raggedy Man,” and “Little Orphant Annie,” were inspired by actual people or events from his childhood.

Riley had difficulty in school and attended sporadically until 1869, when he graduated from the eighth grade at the age of 20. The film speculates that his lack of education may have actually helped him be a more successful poet. Riley is well-known for writing in dialect, and this accessibility of common language combined with the often simple and nostalgic qualities of his poetry gave him widespread popularity.

The program also details Riley’s struggle for acceptance in the literary community, which continues even today. Faced with rejection and scandal in his career, including writing a fake Edgar Allen Poe poem and his battles with alcoholism, he eventually found success in established literary outlets and lecture tours across the country.

Despite modern criticisms of Riley’s poetry as overly sentimental and too simplistic, the documentary shows how he continues to be celebrated today. The annual Riley Festival in his hometown of Greenfield, two Indiana museums dedicated to his life and work, and the Indianapolis children’s hospital named for him are all tributes to his enduring legacy.

For an even more immersive exploration of James Whitcomb Riley's life, give to WTIU today for tickets to an exclusive members-only day trip in April 2018, touring several significant locations during Riley's time in Greenfield and Indianapolis. 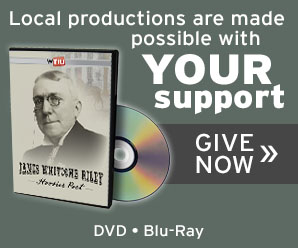