Who to Remember and How (Updated) 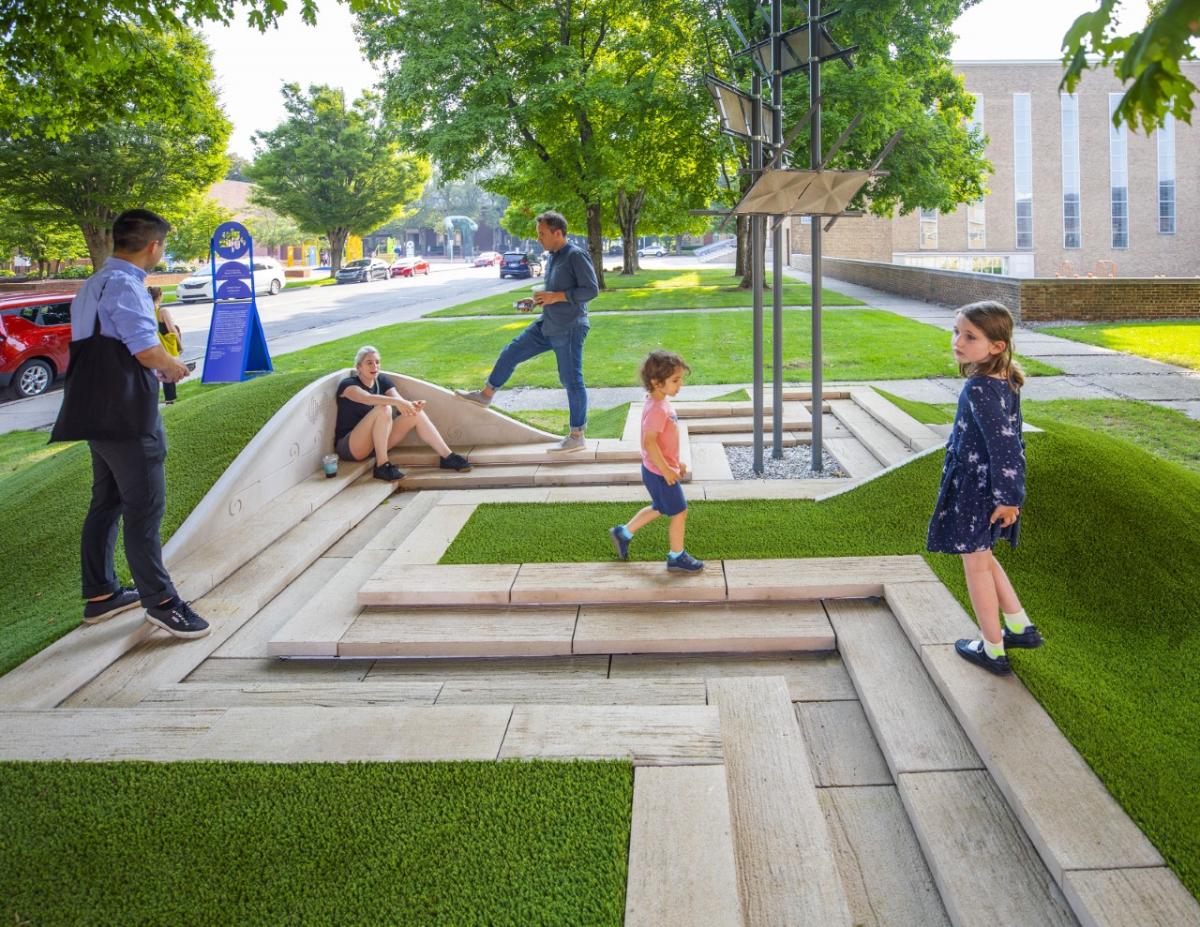 In a city named after the founding colonizer of the Americas, in a state named after the people whose location he misidentified, there was, briefly, a memorial to the tension between those two names: Columbus and Indiana. I’d been to Columbus, Indiana, before and hadn’t given the irony a second thought. The difference this time was I was there to see the memorial that highlighted that irony. It was part of an exhibition in Columbus called, appropriately, Exhibit Columbus. The organizers had asked designers and artists to make public art on the theme of New Middles. They talked about middle cities in particular - the idea being mid-sized AND midwestern. Like Columbus.

The exhibit started last August. I went in October. As I walked around with my mic, I watched people encounter the art. A lot of people just gazed at it, like they were looking at sculptures in a museum. But the pieces had platforms, astroturf hills, foggy screens to peer through, bouncy balls, which meant the kids were jumping right in. The day eventually got me thinking about history, memory, how we acknowledge the past that’s still with us. But at first, as we all wandered around the art, I just wanted to know who public art was for.

Was it for those kids, playing on it? Was it for the people who pass it daily and barely give it a glance, like the man on the corner who said “I’ve stood at this corner before. But I don’t look at it. I’m too busy looking at the streets, you see.”

Let’s be clear. Public art is as often about telling a story to the public as it is . The way the St. Louis Arch is a “gateway to the west.” It’s celebrating St. Louis as a jumping-off point for Europeans to colonize west of the Mississippi. At least the arch is fairly abstract. Go back to the early twentieth century and the line gets blurrier between “public art” and the monuments we’ve put up to famous men, or to fallen soldiers. We have a lot of war memorials in this country, so many lists of names of fallen men. A lot of people are ready to pull down the statues of Confederate generals, but it’s more complicated when it comes to the soldiers who often went to war as much out of necessity as patriotism.

I found myself in a square of twenty-five square limestone columns. This a permanent piece, not part of the exhibition. I didn’t know what it was at first, but then I realized it was a war memorial. It was the most intriguing war memorial I’ve seen, other than Maya Lin’s Vietman Veterans Memorial. The columns were rough-hewn on the outside, but the inside faces were smooth, and they had writing on them. I looked closer and I realized it was the text of final letters soldiers had sent home before they were killed. There were also official letters notifying families of their loss. All these letters were chiseled into the stone. It got me thinking about who we choose to remember - soldiers, white men - and who we don’t.

The piece I was there to see offered a different take on the idea of the memorial. That one didn’t point to a moment in history. There were no names on it. No particular war, no group of fallen soldiers. No individuals. It was far more abstract.

And yet, as I would come to learn, it tied together a lot of different histories about colonialism, the Native people who first lived here, the European laborers who’ve been quarrying for generations, and, you might say, those kids, too, who were climbing all over it.

That was LaWaSo Ground, designed by Jeeyea Kim, Dorian Bybee, Katrina Mitten, Tyden Graverson, and Brian B. Kim. I spoke with a number of locals who had interacted with the piece - or, in some cases, had walked by without paying much attention at all. I also spoke with Jeeyea Kim and Dorian Bybee about their goals with the project. That conversation got me thinking about other memorials and public art in Indiana, so I called Richard McCoy, the executive director of the Landmark Columbus Foundation, who’s thought hard for years about the role of public art. 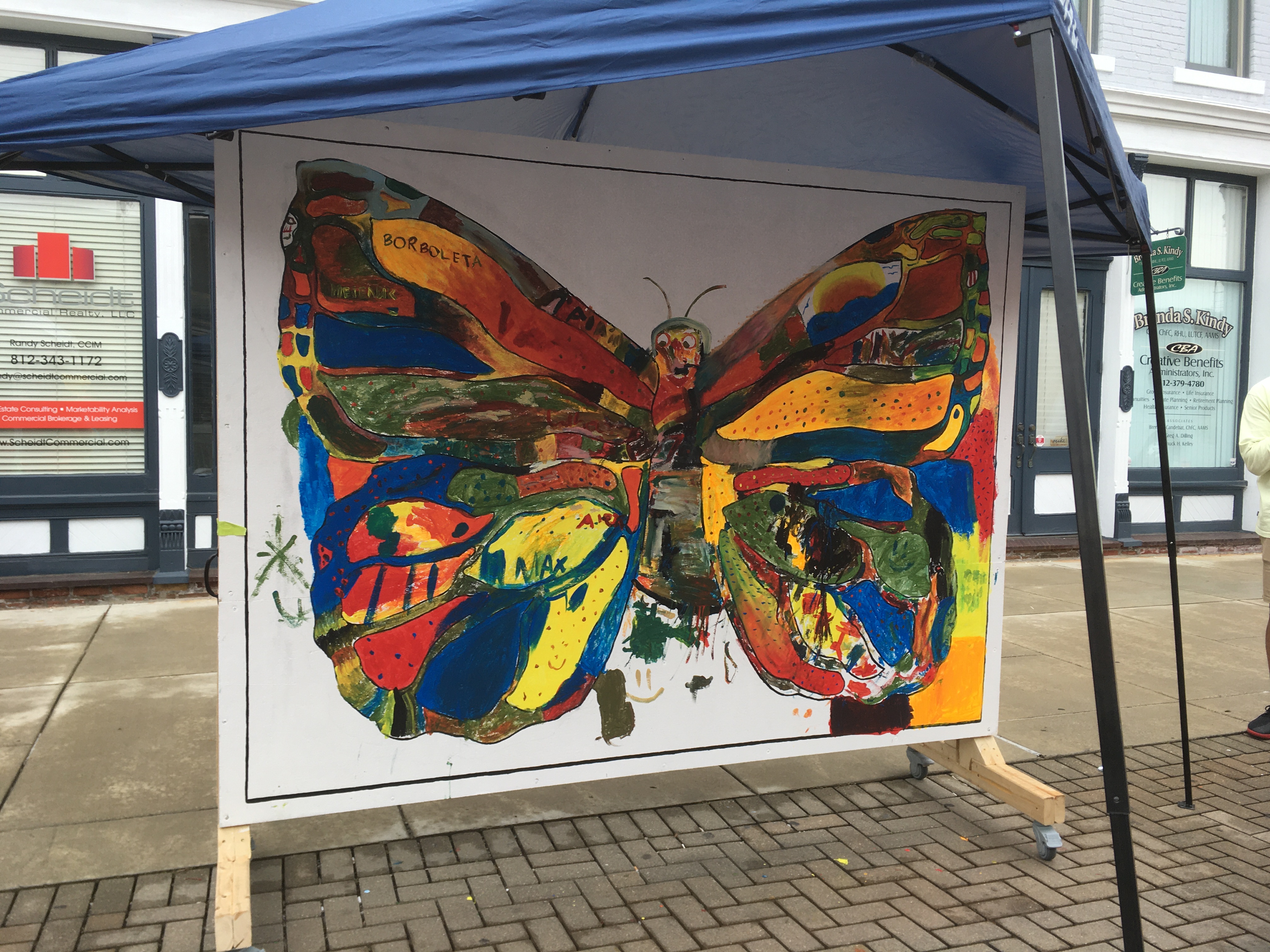 The day I was in Columbus was also the Fiesta Latina, a celebration of all the Latinx cultures that have made a home there - and it’s quite a range. At one end of the Fiesta Latina, I saw kids painting the wings of a giant butterfly. It was at one end of the festival, past the Brazilian Friends Band on the outdoor stage, past the stands selling horchata and tacos al pastor, past the booths for local volunteer networks. There was a big wooden board, about six feet by nine, with the outline of the butterfly in black, and there was a woman helping the kids fill their palettes with color.

Her name was Karla Guerrero. Karla is the youth engagement coordinator for Su Casa Columbus. We talked about why she created a participatory mural, about what community means to her, what art can do for communities, and - somewhat accidentally - about code-switching.

Finally, this week’s episode ends with an update from Richard McCoy, executive director of Foundation Columbus, about the new cycle of Exhibit Columbus starting this fall. Their opening symposium is October 21-22.