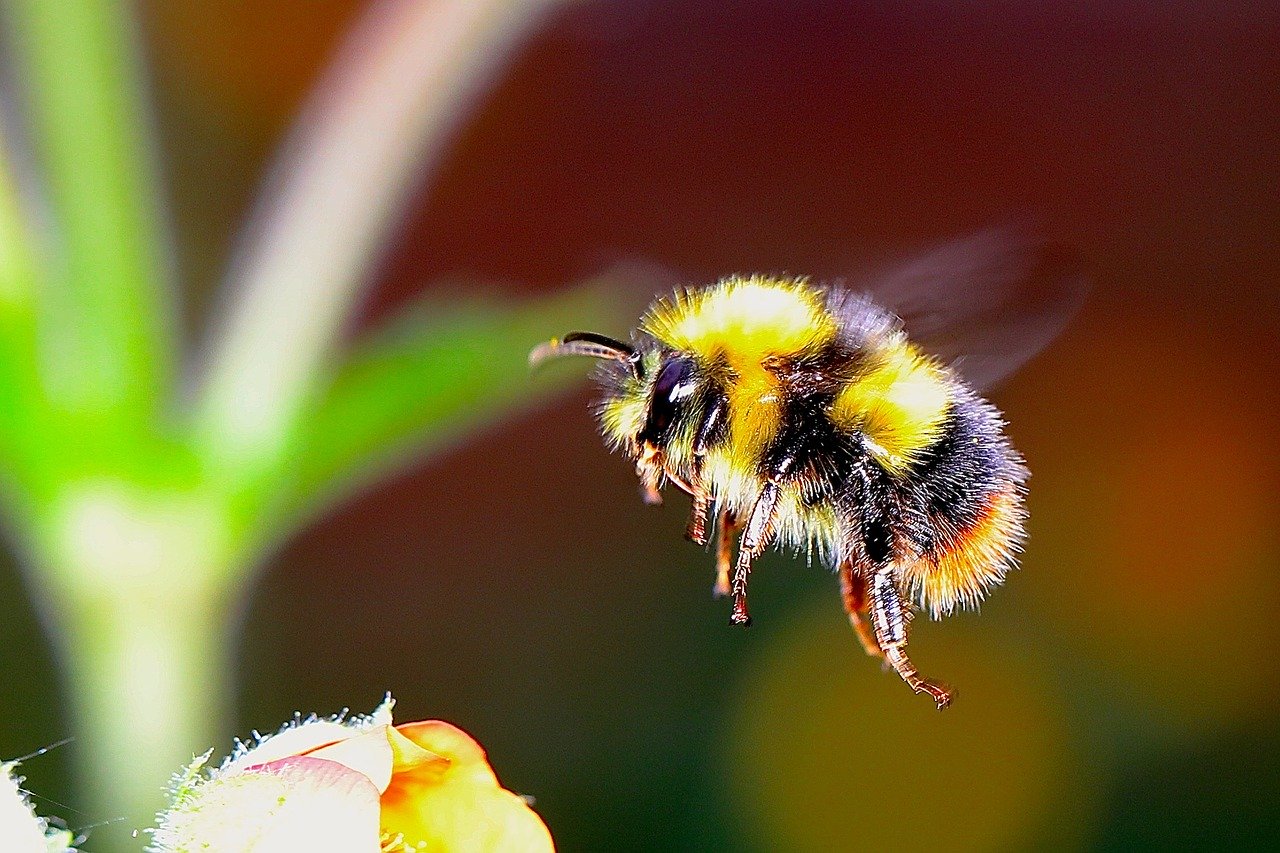 Drones have long been a feature of both ancient music and folk traditions, but they've weaved themselves through our greatest classical pieces as well. Below enjoy a selection of drone music from the Ether Game Brain Trust. Buzz Buzz Buzz!

Richard Wagner (1813–1883) Das Rheingold: Prelude Das Rheingold is the first opera of Wagner’s four opera cycle Der Ring des Niebelungen [The Ring of the Niebelungs]. The prelude opens with one of the most famous drones in the repertory, an E-flat that lasts for 136 measures. This drone introduces Wagner’s “nature motif.” In many traditions, drones are associated with birth, creation and the earth. Wagner was probably thinking of this when he wrote this distinctive prelude, along with musically depicting the Rhine river. In the first act, the dwarf Alberich is mocked by the capricious Rhinemaidens who live in the Rhine River. Under the water, Alberich discovers the gold that they guard, and is told that the gold can be made into a ring that will give the wearer limitless power, but only he who renounces love can fashion the ring. Hungry for wealth and power, Albrich wrests the gold away from the Rhinemaidens and renounces love. He has the gold forged into the ring and enslaves his fellow dwarves to do his bidding. Eventually, the ring becomes cursed, causing death to each of its owners as it passes among germanic mythical characters and gods. Finally, over sixteen hours of opera later, the ring is returned to the waters of the Rhine in Brünnhilde’s famous immolation scene and the curse is lifted.

Johannes Brahms (1833-1897) German Requiem, Op. 45, III. Herr lehre doch mich, Brahms’s German Requiem was inspired by the death of the composer’s mother, as well as by his disillusionment with traditional religion. Although the standard medieval requiem mass was already a text heard regularly in the concert hall, it had traditionally stayed close to its roots in religious ceremony. For Brahms’s Requiem, he chose to abandon the traditional text, and instead chose his own biblical verses, all of which emphasize comfort in the face of inevitable death. The third movement of the requiem features an extended choral fugue sung over a pedal point. The pedal point is a term that comes from organ playing, referring to the organist's ability to play a bass note indefinitely by holding it down with a foot pedal and continuing the music with their hands. In Brahms' Requiem the pedal point is a low D played mostly by the timpani and is held for over two minutes.

Henry Purcell (1659-1695) Fantasia upon One Note The Fantasia is the most popular type of piece written for viol consort, especially in Renaissance England, where viol playing was a pastime amongst amateurs, nobility and professionals alike. The height of the viol consort’s popularity was the Tudor era, and Henry Purcell’s career came slightly after that period, sitting squarely in the Baroque era. Thus, his viol consort music, though written in the style of earlier music, has some unusual elements more aligned with Baroque music and is very technically demanding. You may have noticed this piece’s unusual feature (the title gives it away), the tenor part only plays one note for the whole piece. It’s believed that Purcell wrote this fantasia for a friend who wanted to play in a viol consort, but that this friend didn’t know how to play the viol, so they were only given the responsibility of one, very important, note.

Frédéric Chopin (1810-1849) Five Mazurkas, op. 7: No. 1 in B-flat, Mazurka in F minor, Op. 68 No. 4 The mazurka comes from the Mazovia region of Poland, where Frédéric Chopin spent his childhood. It is a lively dance associated with country life and rustic living. Chopin elevated the genre, not by making it grand, but by keeping it musically inward and harmonically expressive. However many of the musical characteristics of Mazovia that influenced Chopin still exist, an example being the use of a drone that enters in the third section from this first mazurka. In Polish folk music, mazurkas would have been played on the traditional bagpipes, or Gajdy accompanied by a simple drone on the tonic or a fifth. Chopin wrote around fifty mazurkas, and with their evocations of the Polish countryside they have remained some of his most popular compositions.

Béla Bartók (1881-1945) Romanian Folk-Dances, Sz. 68 (orch. version) Bartók was a very busy man. In addition to being a composer, an educator, and a concert pianist, Bartók is also considered to be one of the founders of ethnomusicology, the study of social and cultural aspects of music and dance in local and global contexts. With Zoltán Kodály, Bartók would go into the Hungarian countryside and collect the local folk music, later incorporating it into their own compositions. Bartók’s Romanian Folk Dances, originally for piano and later orchestrated by Bartók, uses seven different folk tunes from Transylvania (now modern day Romania). As performed by the Transylvanian locals, these dances were performed by gypsy violin or flute over a drone, often provided by a gardon, a kind of percussive drone fiddle,  and included the use of a sash and a stick in the dance.

Jean-Philippe Rameau (1683-1764) Tambourin (From Les Indes Galantes) After Lully, Rameau was the next influential figure in French opera. Lully laid groundwork that Rameau would build on, as well as radically depart from. The traditional form of French opera that Lully established was the five act structure, separated by instrumental dances with accompanying ballet. Rameau also adopted this form, and was particularly fond of using a dance for his interludes called the Tambourin. Though it may have originated in Persia, the Tambourin was thought to be distinctly French, especially popular in Provençe. It’s characterized by rapid repeating rhythmic patterns, often punctuated by a tambourine, and in keeping with tonight’s show, the use of a drone for accompaniment.

Edgard Varèse (1883-1965) Hyperprism  Edgard Varèse, with his experiments with musical timbre and rhythm, has always been a bit of a polarizing figure. Some people loved his progressive views on the limits of music, others considered him a menace. At the 1923 premiere of the work Hyperprism for the International composers guild (a group that Varèse founded to champion the performance of new music), not everyone was pleased. People booed, fistfights broke out, and fellow composer Carlos Salzedo reportedly had to step in to quell the unruly crowd. A later review of the work in the Saturday Evening Post compared the sounds of Hyperprism to,  “an alarm of fire at the Zoo, with the beasts and birds all making appropriate noises—the lion roaring, the hyena howling, the monkeys chattering, the parrots squealing ...  The work has, of course, not the slightest connection with music.”

Joseph Bodin de Boismortier (1689-1755) Ballets du Village: Premier ballet French composer Joseph Baudin de Boismortier wrote a large number of concertos for various instruments, as well as Divertissments which were performed alongside popular operas by Lully and Rameau. Divertissments were inserted as interludes between acts of the main show. Sometimes, they had nothing to do with the plot of the opera they were a part of, and featured instrumental pieces, ballets and other forms of group dancing. We just heard the first of his most popular collection of Divertissments: the “Ballets de Village.” These instrumental dances would have been accompanied by pastoral scenery and dancers dressed in folky garb. Drones have always been associated with folk music, even in the Baroque era, and thus folk instruments are included alongside classical instruments in these ballets. In the piece we just heard, you can hear two famous French folk instruments known for their droning abilities: the vielle, or hurdy-gurdy, and the musette de coeur, or French bagpipe.

George Harrison (1943-2001) Within You Without You George Harrison wrote “Within You, Without You” after returning from India where he studied classical Indian music with the famed sitarist Ravi Shankar. While it would be his only composition featured on the Beatles 1967 album “Sargent Pepper's Lonely Hearts Club Band,” the song points to the emerging influence of Indian music on pop music in the 60's. Many Indian musical instruments are featured on this recording. The tablas provide the rhythm, the singing is accompanied by the dilruba (a bowed stringed instrument). Colorful musical accents are played on a zith0er called the swarmandal, and of course there is the sitar. Indian music often focuses more on improvising complex melodies within a musical framework called a raga, the only harmony is usually a drone played by plucking the open strings of a long necked lute called the tambura.