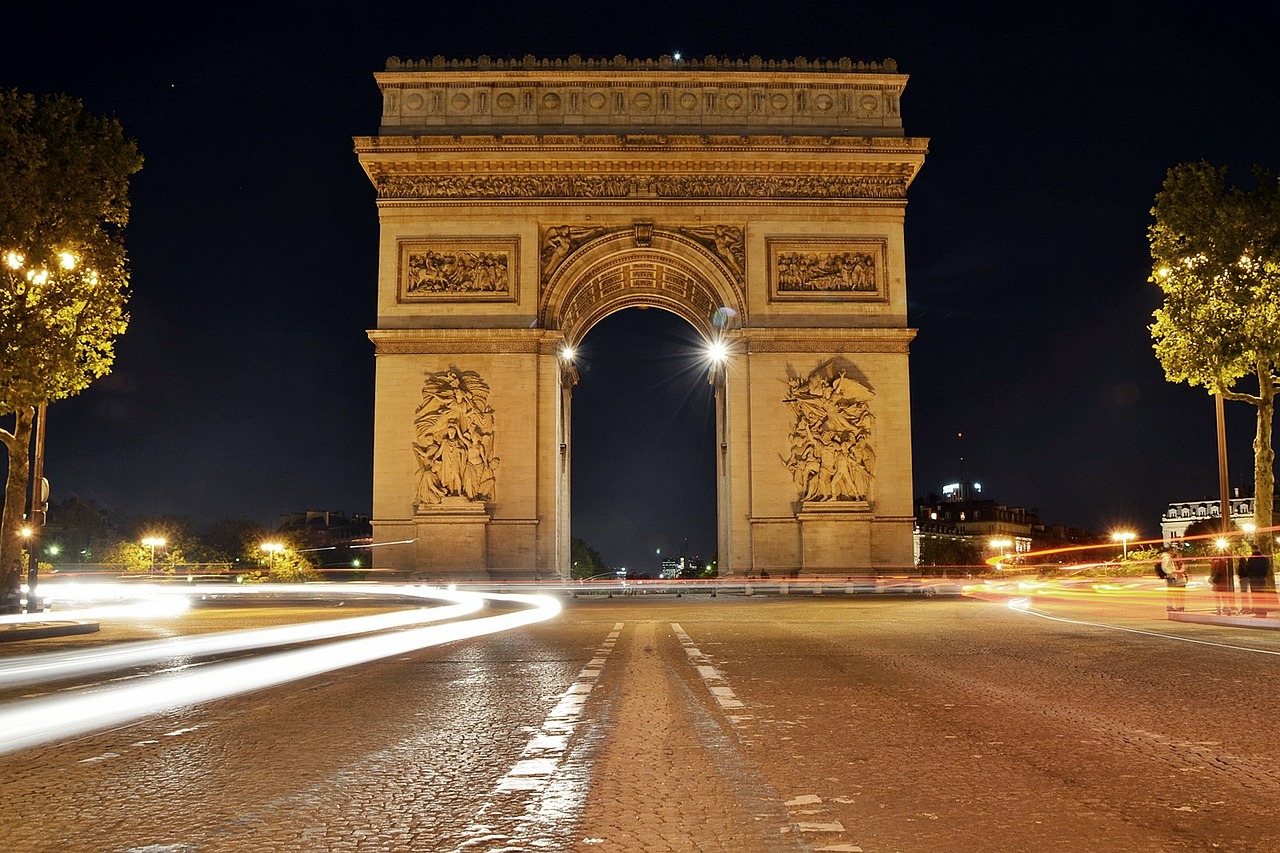 Join the Ether Game Brain Trust for a parade down the Champs-Élysées with our Bastille Day themed playlist. Below you will find our favorite French pieces, as well as Berlioz's own arrangement of the French National Anthem.

Erik Satie (1866-1925) Gymnopédies 1 and 3 To say that Erik Satie was a bit eccentric would be a huge understatement. While visiting the bohemian Chat Noir cabaret in Paris, he was coerced by the proprietor to declare his profession. However, Satie never held a recognizable occupation, so he said that he was a “Gymnopedist,” an obscure word which many thought he had made up. But it actually refers to an athletics competition performed by children in ancient Greece. In 1888, one year after his visit to the cabaret, Satie completed his most famous composition and titled it Gymnopedies. The short pieces are atmospheric, drifting cloud-like from one idea to the next and almost entirely void of tension. As a favor to Satie, Claude Debussy re-orchestrated the Gymnopédies and published them. You may have noticed that we only heard the first and some of the third Gymnopédie. Debussy initially realized orchestrations of only these two pieces, saying that the second did not lend itself to writing beyond the piano. It wasn't until many decades later that the entire collection was orchestrated by other composers.

Jean-Baptiste Lully (1632-1687) Assorted Dances Most royal courts in Europe completely embraced Italian opera in the Baroque era, but not Louis XIV's court in Paris. Though Italian operas were occasionally heard in France, Louis wanted musical dramas performed at his court that exemplified French artistic tastes. Ironically, he entrusted this mission to an Italian dancer who had already won his favor by the time he ascended the throne. Jean-Baptiste Lully single-handedly developed a style of French opera while he was court music director that remained distinct from its Italian counterpart. One of his most successful tactics was setting the French language in recitative, when it had previously been thought that French could not convincingly be spoken in this operatic form. Lully would eventually become most famous for his dances, a selection of which we just heard. Given its structure, French opera had ample opportunity for dance numbers. Lully’s dances were popular for their simplicity, featuring memorable, tuneful melodies and lively rhythms.

Hector Berlioz (1803-1869) Hymne des Marseillais The version you just heard was written by none other than Hector Berlioz during the summer of 1830 during the July Revolution, yet another French popular uprising. However, the original “La Marseillaise” tune was written during the previous revolution by poet and amateur composer Claude-Joseph Rouget de L’isle. De L’Isle wrote the tune on the night of April 24, 1792. It was played at a banquet at Marseilles and printed copies were then given to the revolutionary forces marching on to Paris. The tune was originally titled “Chant de guerre de l’armeé du Rhin (War Song of the Army of the Rhine), but was renamed because of its popularity with the volunteer army units from Marseilles. Ironically De L’Isle was the son of royalist parents and opposed the abolition of the monarchy, and was thus imprisoned until the fall of Robespierre, an event for which he wrote another anthem. La Marseillaise officially became the new French national anthem in a decree passed by the new national assembly on July 14, 1795.

Maurice Ravel (1875-1937) Miroirs: Une barque sur l'océan One of French composer Maurice Ravel’s most famous works, Miroirs, a suite for solo piano, was composed between 1904 and 1905. It contains five movements, each of which is dedicated to a different member of the French avant-garde artist group, Les Apaches, of which Ravel himself was the most famous member. This movement, “Une barque sur l’océan,” is the third movement in the suite. It is dedicated to the painter Paul Sordes. It is the longest piece in the suite, and Ravel ultimately orchestrated it and produced a version suitable for performance by a symphony orchestra. Ravel was fond of this formula and often composed new works for solo piano, only to go back to them a year or two later and turn them into orchestral compositions. While listening to “Une barque sur l’océan,” one can almost feel the gentle sway of the boat rocking as the waves glide by.

Yann Tiersen (b.1970) Amélie: "La Noyée" When Jean-Pierre Jeunet released his fifth film Amélie in 2001, it sent waves of nostalgia through viewers for a bygone era of Parisian society: picturesque, free wheeling and highly whimsical. Named by the New York Times as one of the top 100 films of all time, the film follows kindred spirit Amélie Poulain through her life in Montmartre and its many colorful characters. The film’s success was partly due to its distinctive soundtrack, created by accordionist Yann Tiersen. Jeunet had never heard Tiersen’s work, and chanced upon one of his album’s when his personal assistant played a couple tracks during a road trip. Soon after, Jeunet purchased Tiersen’s entire catalogue and asked him to choose tracks for Amélie. The movie inspired an international revival in French cinema and Francophone culture, and Tiersen’s music fostered a new direction in French indie pop, with an emphasis on piano, accordion and a bittersweet sound.

Joseph Canteloube (1879-1957) Chants d'Auvergne: 'La Delaïssádo' [The Forsaken Shepherdess] In 1901, Joseph Canteloube, having, at the age of 22, already earned his degree, left home, taken a job at a bank, left that job upon his father’s death, and become the sole inheritor of his late father’s estate, decided to begin composition studies. Reluctant to leave the family home, he initially began his studies with Vincent d’Indy via correspondence, but ultimately, with d’Indy’s encouragement, he left home in 1907 in order to take up studies at the Schola Cantorum in Paris. 'La Delaïssádo' comes from his most famous work, the collection of songs titled Chants d’Auvergne, a tribute to his lush, beautiful homeland. The collection took him more than thirty years to complete; he began work on it in 1924 and didn’t finish until 1955. In addition to his work as a composer, Canteloube was a respected musicologist, with a strong interest in French folk songs, many of which appear in the Chants d’Auvergne.

Germaine Tailleferre (1892-1983) Harp Sonata You might be familiar with the group of Russian composers known as “The Mighty Five” It is no coincidence that in 1920 the French created their own equivalent known as “Les Six”. Six students from the Conservatoire: Poulenc, Auric, Milhaud, Honneger, Durey, and Tailleferre were brought together to develop a new music that would be distinctly French and distinctly modern. The composers of Les Six rejected Wagnerian romanticism in favor of the sounds of everyday life. Inspiration was taken from machines, the circus and jazz, and neoclassical qualities like straightforwardness, clarity and brevity had the most aesthetic value. Germaine Tailleferre was a child prodigy at the piano, and under the mentorship of Erik Satie became the only female member of Les Six. Though still experimental, her music remained lighthearted and spontaneous in spirit throughout her career, most likely influenced by her devotion to children and children’s music.

Adam de la Halle (circa 1240 -1287/1306) Le jeu de Robin et Marion Adam de La Halle was a 13th-century French-born trouvère, a poet-composer who worked in the court of Charles I, the King of Naples. The trouvéres belonged to one of the oldest surviving art music traditions of Europe, that of the troubadour. The name difference refers to location: the troubadours worked in southern France while the trouvéres worked in the north. One might think of the troubadour as a wandering minstrel that moves from town to town, but the troubadours and trovéres actually worked in aristocratic circles, and played courtly music. Their music practices were highly specialized and full of complexity. Adam de la Halle’s most famous work, Le Jeu de Robin et Marion or The Play of Robin and Marion, is typical of the French lyric form of the pastourelle, a type of romance where a brave poet-knight meets and falls in love with a coy and clever shepherdess. It’s the oldest surviving French secular play with music.

Serge Gainsbourg (1928-1991) Bonnie and Clyde Though he began his professional life as a disillusioned drawing teacher and bar pianist, Serge Gainsbourg would become one of the most notorious “enfant terribles” of French pop and one of its most influential songwriters. Emerging at a pivotal moment in popular French music. Serge was the link between a music scene that had been dominated by chanson singers like Edith Piaf and Jacques Brel and a new rebellious, go-go girl pop music known as yéyé. Gainsbourg’s lyrics, with its wordplay, sexual innuendo and bizarre satire routinely scandalized the public and perfectly embodied the sentiment of a disaffected Parisian youth culture. In this U.S.-charting single Bonnie and Clyde, Gainsbourg is accompanied by the actress, singer and model Brigitte Bardot, who epitomized the liberated woman of the 60’s. Among her many accomplishments as a leading cultural figure, Bardot’s likeness was used to portray Marianne, the french equivalent of Uncle Sam, who started as an allegorical goddess of Reason and Liberty during the Revolution, but eventually became the national personification of France.