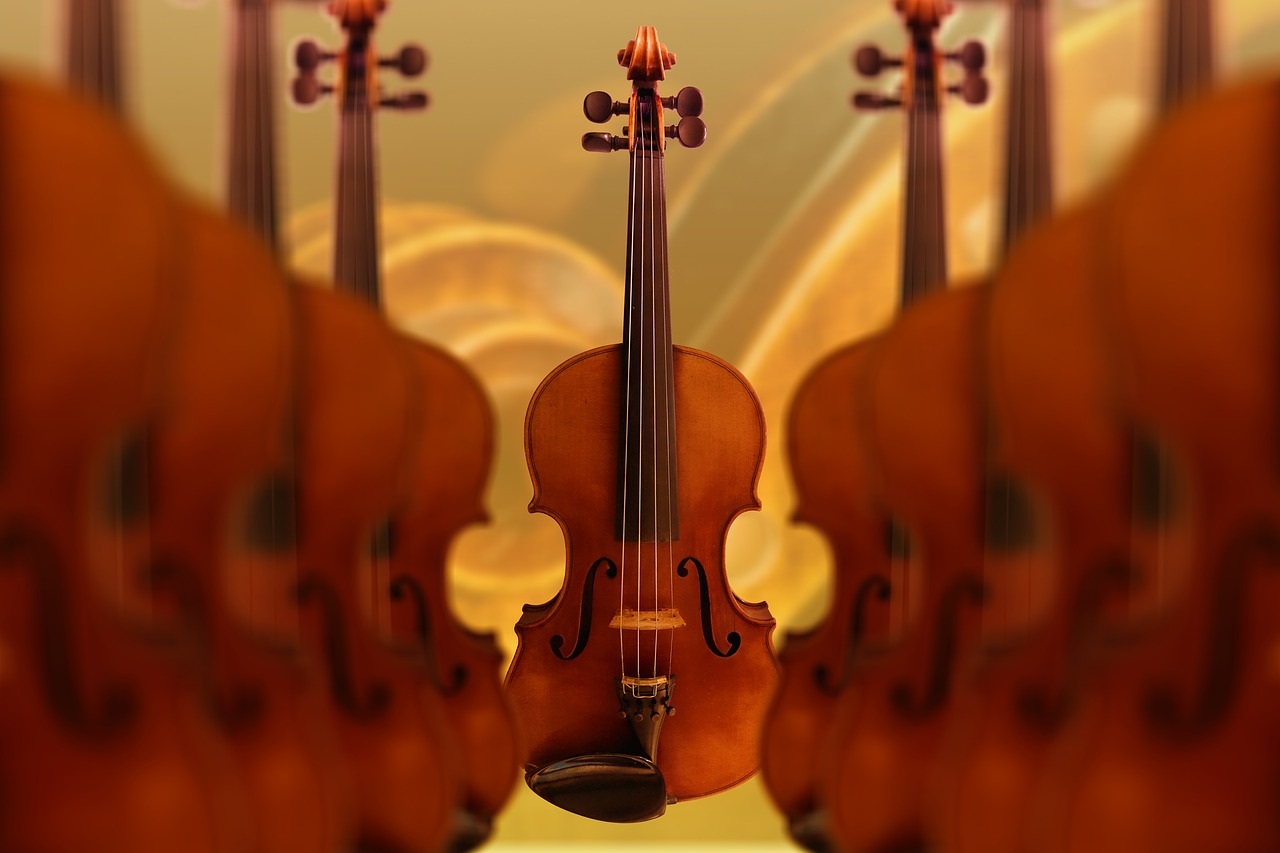 Back by popular demand, our show that was overshadowed in October, about the instrument that is most overshadowed in the orchestra: the viola. Browse our playlist from the show and listen to some of Ether Game's favorite pieces featuring the viola.

Claude Debussy (1862-1918) Sonata for Flute, Viola, and Harp This sonata is the second in what was intended to be a six-sonata cycle for various combinations of instruments. Each sonata was to be dedicated to a forgotten french composer from the 18th century. Debussy began the project with the encouragement of his publisher, Jacques Durand. As Europe was entering the second year of World War I, the composer was at an all-time emotional low, having been recently diagnosed with cancer, and Durand thought the commission of a new project would revive his spirits. The pervasive melancholy of the second sonata is accentuated by the use of the viola, which Debussy decided would be better to use instead of the oboe, as had been originally written. Unfortunately Debussy would not live to complete six sonatas, however he managed to leave us with three exquisite ones which have become standards in chamber music repertoire.

Richard Strauss (1864-1949) Don Quixote, Op. 35, Sancho Panza Theme Many people enter upon delusions of grandeur at one time or another in their life, but no story of delusion has made a larger impact than Cervantes’ groundbreaking novel, Don Quixote. We can even thank this novel for adding the term “quixotic” into our vocabularies. In the story, our hero loses his sanity when reading stories of the glorious deeds of chivalric knights and their beautiful, yet distressed, damsels. Quixote tries the life of knighthood with his portly squire, Sancho Panza. In his tone poem, Richard Strauss used the cello to represent Quixote and the viola to represent Panza. In the finale of Strauss’ work, as in the novel, Quixote’s delusional bubble is burst. He is returned to sanity and dies amidst reflections on the foolishness of his errant knighthood.

Hector Berlioz (1803-1869) Harold en Italie, Op. 16 Harold in Italy, Berlioz’s second symphony, was no less unusual than his first “program symphony,” the famous Symphony Fantastique. The program is based on a poem by Lord Byron, “Childe Harold’s Pilgrimage,” which tells the story of a lonely dreamer who seeks solace by wandering through foreign lands. The work is an unusual fusion of genres—despite the prominent viola solo in each movement it’s not really a viola concerto, but simply a symphony with a big viola part. This was a problem for the performer who suggested the work, famed virtuoso Nicolo Paganini. Paganini, having just acquired a very nice Stradivarius viola, found that the viola repertoire of the time didn’t offer anything up to his standards. Berlioz must have changed Paganini’s mind, because after hearing Harold en Italie, he brought Berlioz on stage, knelt before him and kissed his hand to thunderous applause.

Béla Bartók (1881-1945) Viola Concerto, Op. post., Sz. 120 Bela Bartok spent the early part of his professional career traveling through Hungary collecting folk music, and even as he toured all over the world later in life, the distinctive music that he heard and analyzed in those early days would remain with him. His viola concerto for example, though echoing the style of Hungarian folk melodies, was written while Bartok was on summer vacation in the Adirondack region of New York. Bartok rented a rustic cabin on the historic Saranac Lake to spend his down time delving into the possibilities and limitations of the viola. Sadly, he would pass away from Leukemia only months after starting the concerto, leaving behind incomplete sketches of the work. For that reason, many editions and interpretations of the piece exist, and no recording is exactly the same.

Jean-Baptiste Lully (1632–1687) Armide: Overture Before Jean Baptiste Lully became Superintendent of Royal Music for the court of Louis the Fourteenth in 1661, the highest honor he could achieve as a musician, he had been director of Les Petit Violons, the violin band that accompanied the Sun King’s ballets (Louis was famously an excellent dancer). The band consisted of twenty musicians. What is unusual is the way the string parts of Lully’s orchestra were organized. The modern orchestra usually has four string parts: first violin, second violin, viola and cello with bass. The French Baroque orchestra used five parts, a treble violin, alto viola, tenor viola, low-tenor viola and bass violin, which was tuned a step lower than the cello. The unusual inner viola parts used instruments tuned to the same pitch, however they were built in three consecutive sizes to give them different volumes and timbres.

William Walton (1902-1983) Viola Concerto: Vivo, con molto preciso Entering Christ’s Church, Oxford as a chorister at the age of ten, William Walton hung around for a bachelor’s degree that he never finished. After failing several important exams, he dropped out at the age of eighteen, living for a time on the largesse of his friends Edith, Osbert, and Sacheverell Sitwell. Brilliant, talented, and quite wealthy, the Sitwells were the ideal patrons for a blossoming modernist like Walton. With their support, Walton decided to compose a concerto for the also-rans of the string orchestra, the viola. Though his Viola Concerto eventually brought him to the forefront of British classical music, Walton's masterwork was initially rejected by viola virtuoso Lionel Tertis, who had been asked to premiere the piece in 1929. Composer Paul Hindemith stepped in to premier it instead, and the concerto received such a positive response that Tertis changed his mind and performed the work three years later.

Rebecca Clarke (1886-1979) Sonata for Viola and Piano Composer and violist Rebecca Clarke faced difficulties in her career due to a continuing prejudice against female composers in the early 20th century. Yet her music spoke for itself and Clarke achieved fame as a composer with her Viola Sonata of 1919 and Piano Trio of 1923, both of which tied for the Coolidge Prize. Although it was an anonymous competition, some of the prizes’ judges mistakenly identified the Viola Sonata as written by Ravel, while The Daily Telegraph supposed ‘Rebecca Clarke’ to be a pseudonym for Ernest Bloch. In spite of the success of her viola sonata, much of Clarke’s work is still unpublished and remains the property of her estate. The release of three unpublished works in the late 1990’s has us hoping we will hear more of Clarke’s work in the future.

Reinhold Glière (1875-1956) Cradle Song for Viola and Double Bass Reinhold Gliere has not often appeared on our super stumper roster, but his richly varied output, often underappreciated in its totality, made him a prime candidate for our Viola show. While Gliere is mostly remembered for his opera and ballet music, he had a keen understanding of the string instruments of the orchestra. He wrote this cradle song for violin and cello, but this transcription takes that voicing down a notch with  instrumentation for the viola and double bass. This transcription was created by double bassist Frank Proto, a career composer who, over the last fifty years, has earned a reputation writing for the uncommon instruments of the orchestra, such as the viola.

Vampire Weekend (2008) The Kids Don't Stand a Chance What do the Beatles, The Velvet Underground, Cream, The Cure, Brian Eno, Gorillaz, Van Morisson, The Doobie Brothers, Imagine Dragons and the Stooges all have in common? You guessed it, they have all released at least one song featuring the viola. The viola’s naturally mellow timbre lends itself well to accompanying many kinds of voices, including the bright vocals of Vampire Weekend frontman Ezra Koenig. The closing track to Vampire Weekend’s eponymous album, “The Kids Don’t Stand a Chance” features several classical instruments, giving this song a boppy, “chamberesque” sound reminiscent of sunshine pop. This is in sharp contrast with the sardonic lyrics, which express a frustrated and cynical view of making it after graduating from college.