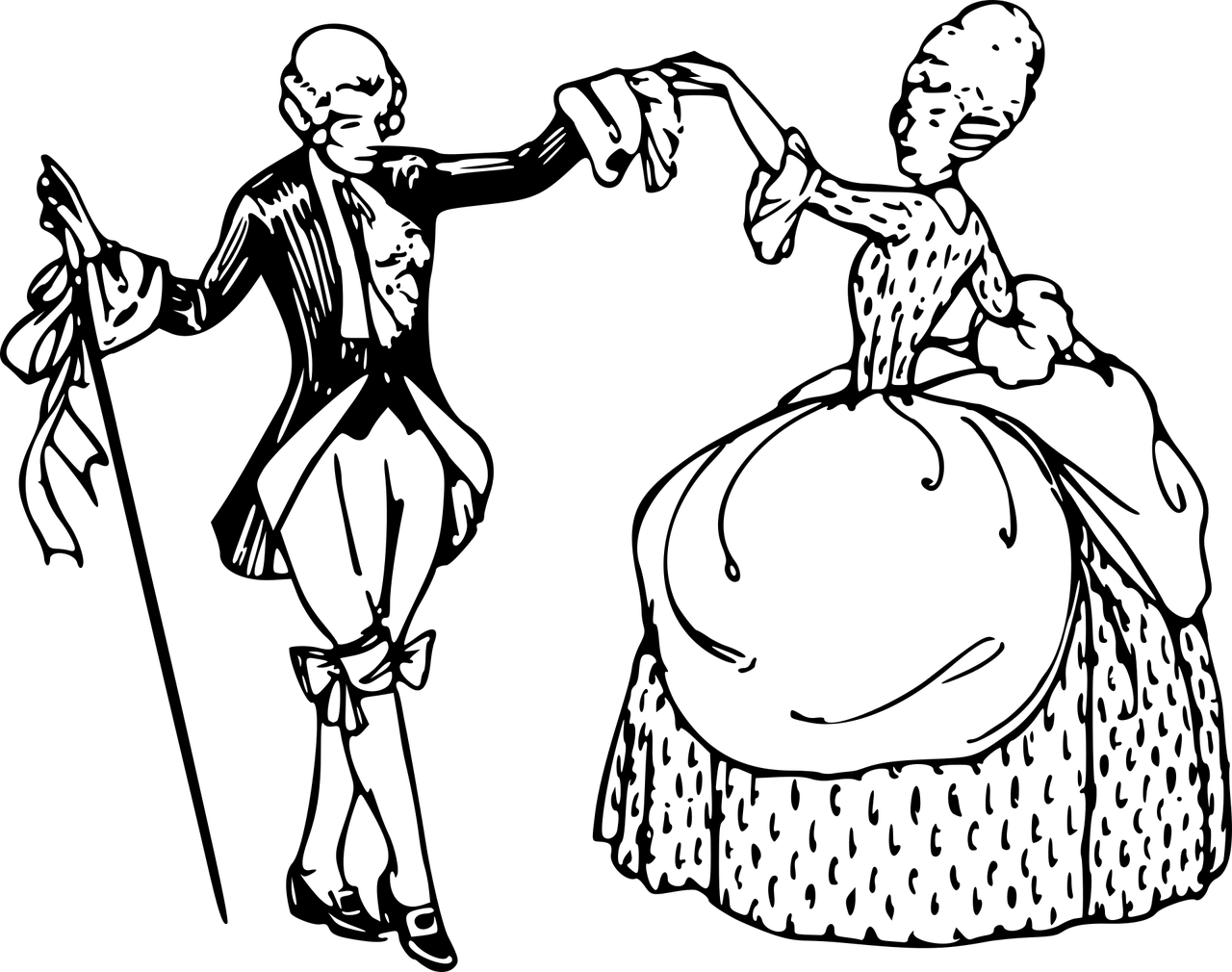 This week, we’re doing the honor of asking your presence on the floor with a playlist about the Dance Suite. From its start in the Renaissance and Baroque Era to a revival in the 20th century, browse our playlist to discover the many apperances of the Dance Suite in classical music.

Johann Sebastian Bach (1685-1750) Violin Partita No. 3 in E, BWV 1006, Minuets I and II The word “partita” had a different meaning for just about every composer who used it. For Bach, a partita was usually a dance suite for solo instrument: namely violin or keyboard. The dance suite’s glory years were the Baroque Era, a period when instrumental music was enjoying a popularity that had yet been unseen in music history. The Partita No. 3 in E Major for Solo Violin was the last of Bach’s group of six violin sonatas and partitas that Bach completed around the year 1720, and are among the most celebrated works for solo violin. This partita also serves as an ambassador to earth. Several movements appear in one of the three pieces by Bach on the Voyager Golden Record, currently floating somewhere in interstellar space.

Ottorino Respighi (1879-1936) Ancient Airs and Dances, Suite No. 3 Respighi's musical output is defined by his interest in ancient history. His most well-known works, three tone poems—Fountains of Rome, Pines of Rome, and Roman Festivals are all based on ancient scenes from Rome. His Ancient Airs and Dances also looks backward: three orchestral suites that rework 16th- and 17th-century dance pieces originally written for lute. Respighi’s music is a good example of what became of the dance suite after it fell out of fashion in the Romantic era. It became a formal technique used by the Neoclassical composers, like Respighi, Stravinsky, Debussy and Prokofiev, to look backward and link their compositions to valuable music that they believed was being forgotten. The original lute pieces used in Respighi’s Ancient Airs and Dances come from famed lutenists Santino Garsi da Parma, Vincenzo Galilei (father of Galileo), and a number of anonymous composers.

Georges Bizet (1838-1875) L'Arlésienne: Suite No. 1: Prelude By the time George Bizet was composing in the mid Romantic period, the dance suite had completely transformed as a genre into the sonata. Even in his home country of France, where the dance suite experienced its greatest popularity, the form had mostly been relegated to ballet and theater music. Bizet created the orchestral suite we just listened to from music he wrote for Alphonse Daudet’s play L’Arlésienne. The play follows a real event in the life of the poet Mistral, whose young relative had killed himself over a heartless girl. Bizet borrows several features from the Baroque dance suite for this work, such as a lively prelude to kick off the music. This prelude would later become the most famous melody from the collection. Known as Farandole and often attributed to Bizet, it’s actually borrowed from a French Christmas carol entitled The March of the Kings.

Arcangelo Corelli (1653-1713) Sonata da camera a tre in e, Op. 2, No. 4 Known as a talented violinist, Arcangelo Corelli was the first composer to derive his fame exclusively from instrumental composition. Throughout his output of six collections of instrumental music, Corelli stuck to mostly three genres: solo sonatas, trio sonatas and concerti. Despite its name, Corelli’s trio sonatas were sometimes written for four players. Typically, Corelli’s instrumentation called for either two violins and 2 continuo instruments such as a violone and harpsichord, or two violins and one continuo instrument (hence the “trio”). The sonata we just heard bears the phrase “da camera” indicating that it is a chamber sonata. In contrast to the sonata da chiesa, or church sonata, which contained a fugal style and movements divided according to tempo, the sonata da camera was essentially a dance suite. Corelli became known for mixing elements of both types of sonatas, regardless of the classification he gave to them. Eventually, the distinction between church and chamber was dropped altogether

Benjamin Britten (1913-1976) Simple Symphony, Op. 4: Sentimental Sarabande Benjamin Britten completed the Simple Symphony when he was only 20 years old, but the melodies are all derived from the juvenalia he wrote as that prep-school boy. Each movement is given an appealing and alliterative appellation, beginning with the “Boisterous Bourée,” continuing with the famous “Playful Pizzicato” movement, and ending with a “Frolicsome Finale.” This movement, the “Sentimental Sarabande” derives from two early piano pieces by Britten, which he reworked as a sarabande. This slow, triple meter dance originally came from Latin America, and in the 17th and 18th centuries became an essential part of the Baroque dance suite.

Aram Khachaturian (1903-1978) Masquerade Suite: Gallop Aram Khachaturian was raised in the Caucasus, a region which includes Georgia, Armenia, and Azerbaijan. When these countries were incorporated into the Soviet Union in 1921, he moved to Moscow and received the majority of his musical training there. Though he did not return to his homeland, he never forgot his roots and used Armenian folk and classical music techniques extensively in his compositions. The Soviet Union was generally supportive of the arts as long as it fell under certain political specifications, and Khachaturian’s music had their approval. However later in his career he was denounced as a formalist and his music, along with the work of fellow composers Shostakovich and Prokofiev, was deemed “too western” This early piece comes from incidental music commissioned for a play by Mikhail Lermontov titled Masquerade. Three years after completing the commission, Khachaturian reworked the music and presented it as a dance suite for orchestra.

Isaac Albéniz (1860-1909) Suite Antigua: No. 3 Gavota Recognized as a piano prodigy when he was three, Isaac Albeniz was sent from his family home in Barcelona to take private lessons in Paris. When his father lost his government job in 1868, he and his sister earned money by giving recitals around the Spanish provinces. His advanced studies in piano were at the Conservatory in Brussels, and after graduating with distinction he began touring again, this time at the salons of Spanish aristocracy. As a composer, Albeniz did not directly quote Spanish folk music, preferring to evoke a general sense of “spanishness”. He was also a classicist, most likely due to his education in mainland Europe. Though he promoted contemporary Spanish music, he was well known for his interpretations of Bach and Scarlatti, and often included Classical-era masters in his concerts. This push and pull relationship between spanish music and conservative classicism is especially apparent in his Piano Suites, where he puts conventional dance suite movements like the gavotte and the minuet into spanish scales and rhythmic idioms.

Nicolas Vallet (c.1583-c.1625) Le Secret Des Muses: Two Courantes Nicolas Vallet was one of the best lutenists in the early part of the 17th century. He was born in France, but apparently escaped to Amsterdam around 1613 after the assassination of King Henry IV because his Calvinist beliefs made him unpopular there. In Amsterdam, he published four engraved volumes of lute music, including his two-part masterwork Le Secret des Muses for the 10-string Renaissance lute. He was a dance instructor too, and wrote many dances, including these two French courantes. The courante, related to the Italian corrente, varied in style from generation to generation. At times, they were considered slow and stately, at other times lively and quick (“courante” derives from the French word for “running,” after all). Sometimes they were simple, other times highly contrapuntal. But they were always written with three beats to the measure.

J. S. Bach arr. Ian Anderson (b. 1947) "Bourée" Heard this melody before? The main theme of Jethro Tull’s instrumental rock number is a direct quote of Bach’s Bouree from his Suite in E minor for Lute. A Bouree is a quick dance in duple meter of French origin, made especially popular as a courtly dance and a ballet step during the reign of Louis XIV. In the context of a Baroque dance suite, it’s not really intended for dancing. Jethro Tull’s arrangement has completely changed the meter of a bouree and put the melody in a new rhythmic setting, one more suited for improvisation. This is not the only instance of classical music arranged by the English band. They began as a blues group, but as their success grew, frontman and flautist Ian Anderson began to incorporate jazz, folk and classical music into his songwriting. They would record a version of the madrigal “Past Time in Good Company” for an album re-release in 2004.