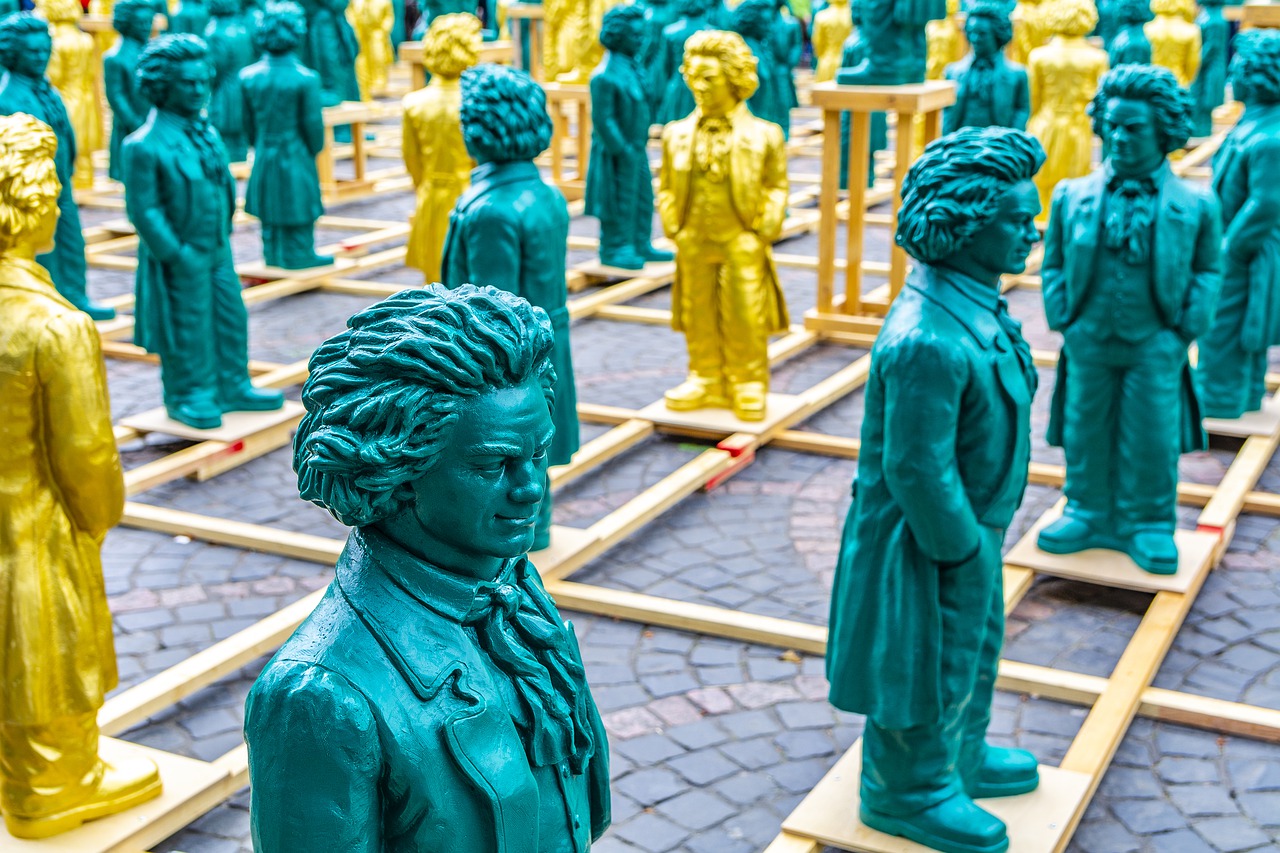 The shadow of Beethoven has loomed over classical music since the composer arrived in Vienna as a student in the late 18th century. Browse our playlist of his influence over centuries of classical music, as we celebrate his 250th anniversary on Ether Game.

Johannes Brahms (1833-1897) Symphony No. 1 in c, Op. 68 Complaining “Do you know how difficult it is to hear the footsteps of a giant behind you?”  Brahms was well aware that he would be held up to the incomparable standards of Beethoven, and did not want to disappoint anyone, especially himself.  For that reason, it took him twenty years to complete his first symphony.  He was forty three years old when it was finally published, having begun work on it when he was a much younger man.  The first movement alone took him seven years to complete to his own satisfaction. Exhausted by his efforts, Brahms set aside the first movement and did not take it up again until 1874.  Two years of further work went into the completion of his First Symphony, and TWENTY YEARS after Brahms started it, the new work was finally published in 1876. Because of Brahm’s relationship to Beethoven while writing this work, and its stylistic similarities to Beetoven’s symphonies, it is sometimes jokingly referred to as Beethoven 10.

Joseph Haydn (1732-1809) Symphony No. 104 in D 'London' When Prince Nicolas Esterhazy died in 1790, Franz Josef Haydn, who had been contractually bound to remain at the prince’s estate, was given a year's leave to travel abroad. It was with great excitement that the composer traveled to England for the first time in 1791. He composed his final 12 symphonies there, as well as numerous other works which were eagerly appreciated by English audiences, including this selection, the London symphony.  Haydn’s most well known pupil at this time was none other than Beethoven, though he would officially be Hadyn’s pupil for little more than a year. However Haydn’s influence is clear in Beethoven’s early work, even if he couldn’t keep Beethoven from forging his own path. Beethoven was often antagonistic toward his teacher, but Haydn still admired his student’s compositions. The two were on good terms by the time of Haydn’s death.

Carl Philipp Emanuel Bach (1714-1788) Cello Concerto in A, Wq. 172, H. 439 Sturm und drang, or Storm and stress was a movement in German arts that reached its height in the 1770s.  Making an appearance in literary, visual and musical genres, its aims were to frighten and stun while overcoming one with emotion. In  music, these include using dramatic effects such as sudden dynamic changes, frenzied tremolos, contrasting melodies, and syncopation. All of these can be heard in CPE Bach’s volatile and eccentric cello concerto, which was completed around 1750, and included modified versions for flute and harpsichord. While CPE Bach and Haydn are most closely associated with sturm und drang, it undeniably had an influence on Beethoven as well, especially in the agitated and bold emotion of his compositions completed after moving to Vienna, where the popularity of the style would have been very present.

Peter Ilyich Tchaikovsky (1840-1893) Symphony No. 2 in c, Op. 17 'Little Russian': Finale Many composers after Beethoven had a complicated relationship to his legacy and music. Tchaikovsky was certainly one of them.  In his diary, Tchaikovsky wrote “I shall begin with Beethoven, whom it is usual to extol indisputably, and it is enjoined to worship him as a god. Thus, what is Beethoven for me? I admire a greatness in some of his works- but I do not love Beethoven.”  Tchaikovsky went on to write that while he loved Mozart, he feared Beethoven, the same way he feared God.  Another time, Tchaikovsky called Beethoven "an unfriendly God to be feared rather than loved." Perhaps he felt that fear after he finished this symphony, because he revised it extensively after the resounding success of its premiere. This revised version is now what is regularly performed.

Louis Spohr (1784-1859) Nonet in F, Op. 31 Beethoven’s music is celebrated and performed every year in Bonn, the town of his birth, with a music festival called Beethovenfest. The first Beethovenfest in 1845 marked Ludvig’s 75th anniversary and included the unveiling of his monument which still stands today. Notable attendees of the first Beethovenfest included Queen Victoria, Hector Berlioz, and Frederich IV, king of Prussia. Many celebrity conductors and musicians were invited to perform, such as Franz Liszt and Louis Spohr. Spohr was in high demand as a conductor and was asked to interpret both the Missa Solemnis and the Ninth symphony for the festival. Louis Spohr had had a friendly relationship with Beethoven and is responsible for popularizing Beethoven’s string quartets, which in turn inspired him to produce his own chamber works: four string quartets, two string quintets, the Octet and this selection, the Nonet.

Luigi Cherubini (1760-1842) Médée: Overture As Beethoven worked on what was to be his only completed opera Fidelio in 1803, it was known that he kept a score of Cherubini’s opera Les Deux Journees close by, which Beethoven considered to be the finest contemporary opera to date. Both Fidelio and Les Deux Journees belong to a whole genre of opera called RESCUE OPERA, which often portrayed the rescue of the main character, followed by the exultation of lofty ideals over the base motives that compelled the plot. Cherubini wrote many rescue operas, taking inspiration from sources including contemporary politics and greek mythology, including Mydee, to which this selection is the overture. However Mydee would be his last rescue opera and as tastes changed in Paris where the majority of his operas premiered, he began composing opera on much lighter themes than justice and tyranny.

Tan Dun (b.1960) Red Sona China’s thriving music traditions are thousands of years old, and many have little in common with western classical music. The music of Beethoven however, is a major exception and has been a part of China’s modern musical identity for almost a century. The Chinese recreated Beethoven as representing the fundamentals of the proper  Chinese lifestyle. For example, the Chinese believe that a successful life requires both hardship and triumph, and Beethoven’s own battle with deafness exemplified this. During the Cultural Revolution, Beethoven’s music was banned in the 1960s because it was deemed a part of old Chinese culture, along with many traditional Chinese arts. Several Chinese orchestral musicians were arrested and even executed for continuing to play Beethoven’s music. When Beethoven’s symphonies were again broadcast on Chinese radio in 1977, many saw it as the true end of the Cultural Revolution. The full story on this fascinating connection to Beethoven can be found in the book Beethoven in China.

Johann Nepomuk Hummel (1778-1837) Piano Trio No. 1 in E-flat, Op. 12: Finale - Presto One music historian described Johann Hummel as the most overrated composer of his time and the most underrated of ours. His early life was not unlike Mozart’s, both in the way he was admired and in his early career; he was a child prodigy at the keyboard and toured Europe extensively with his father. He received lessons from a superstar line up of musicians: Saliart, Mozart, Clementi and Haydn. In the late 1790s, he settled in Vienna to continue his lessons and enjoy his celebrity, but his world was rocked when Beethoven (around the same age as Hummel at the time) arrived in Vienna to take lessons with Haydn as well. Beethoven’s genius at both the keyboard and the quill was said to be a major confidence blow to Hummel, but he soon regained his musical footing, becoming the concertmaster for the Esterhazy family. A friendship of sorts developed between Hummel and Beethoven, equal parts mutual respect and musical rivalry. Hummel would later improvise memorial music at Beethoven’s funeral, in keeping with one of the master composer’s final wishes.

Chuck Berry (1926-2017) Roll Over Beethoven Beethoven’s influence is so far and so wide that it was included in a popular tune in the late 1950’s. Chuck Berry, famous for both his music and his duck-walk, wrote “Roll Over Beethoven” as a response to his sister always using the family piano to play classical music. So, in the song, Berry asks not just for Beethoven to “roll over” and “dig these rhythm and blues,” but for Tchaikovsky to be informed of the news as well. The song also references the Carl Perkins tune, “Blue Suede Shoes,” and the nursery rhyme, “Hey Diddle Diddle.” It has been named the 97th greatest song in Rolling Stones magazine’s list of the top 500. It would seem that after 50 years, Beethoven has still to “roll over,” and Tchaikovsky hasn’t gotten the news either.