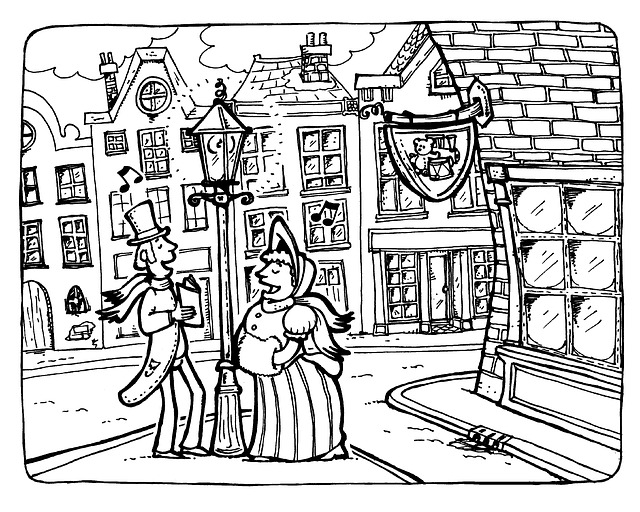 Nine rounds of Ether Game for the first nine gifts of the Twelve Days of Christmas. Browse our playlist for a classical Christmas carol playlist.

A Partridge in a Pear Tree-Erik Satie (1866-1925) Trois morceaux en forme de poire Erik Satie often had a difficult relationship with authority and the musical establishment. Many of his compositions had odd titles, including “Three flabby preludes (for a dog)” and a ballet titled “No Performance Today.” However this piece was in response to a specific incident.  Debussy, whose close friendship with Satie was simultaneously frustrating and inspiring, once commented to Satie that while composing he should pay more attention to form. Satie’s satirical response was this collection of piano duets titled Three Pieces in the Form of a Pear, where the form was unmistakable. A secondary meaning is also implied in that pear, or “poire” in french also means “nitwit.” Even more curious is the fact that the piece contains seven movements instead of three. Or perhaps its three pieces with two introductions and two final additions. One never really knows with Satie.

Two Turtle Doves-Antonín Dvorák (1841-1904) The Wild Dove, Op. 110 Dvorak had a long-standing interest in a collection of poems titled Bouquet, published in 1896 by Czech poet Karel Jaromir Erben. Four ballads from Bouquet led to four different symphonic poems by Dvorak; The Golden Spinning Wheel, The Noon Witch, and the Water Goblin were all written at the same time and published in the same year, while this selection, The Wild Dove, was published three years later. Dvorak had a unique, detail-oriented approach in converting poetic text to symphonic instrumental music. He would compose his melodic motifs according to the same linguistic rhythms of Erben’s poetic verse. In The Wild Dove, a melodic motif uses a combination of flutes, harp and oboe to represent the cooing of a dove, and is heard in completely different moods, from evoking a funeral march to a wedding party.

Three French Hens-Ottorino Respighi (1879-1936) Gli Uccelli [The Birds] III. The Hen Respighi is no stranger to Christmas music, his underrated Christmas cantata Laud to the Birth of the Lord is a favorite here on WFIU. His appealing suite, The Birds was inspired by baroque keyboard pieces depicting our feathered friends. The composers from whom Respighi borrowed include Pasquini, de Gallot, Rameau and van Eyck. We heard the third movement of the suite, titled “The Hen.” (conveniently aligned with our three french hens' clue). Other movements include “The Dove,” “The Cuckoo,” and “The Nightingale.” Just a few years after this music appeared on the concert stage in 1927, it was used for several bird ballets. The first was performed in Italy in 1933, the second in Buenos Aires, Argentina in 1940, and the third in London in 1942.

Four Colly Birds-Olivier Messiaen (1908-1992) Quatuor pour la fin du Temps Olivier Messiaen was passionately fond of birdsong and spent much of his time outdoors notating them using conventional musical notation. For Messiaen, the music of birds was symbolic of the mystic qualities of nature. It appears in many of his compositions, including what is probably his most well known work, Quartet for the End of Time. The unusual instrumentation of Messiaen’s quartet for clarinet, violin, cello, and piano was dictated by circumstance. In 1940, the composer was interned in a German POW camp in Silesia. This work was written and performed in the camp by Messiaen and a small group of musicians who had managed to acquire instruments. The work did not bear any thematic connection to the war or his captivity. Rather, Messiaen, a devout Catholic, wrote a deeply religious work based on images from the Book of Revelation. Birdsongs were incorporated by the clarinet mimicking precisely the call of the blackbird and the violin mimicking a nightingale's song. The work was premiered to what Messiaen recounted as a raptly attentive audience. After this performance, Messiaen and his friends were re-listed as non-combatant musician-soldiers and were allowed to leave prison and return to France.

Five Gold Rings-Howard Shore (b.1946) A Knife in the Dark Howard Shore's film scores for the Lord of the Rings movies match the Wagnerian proportions of Tolkien's story in more ways than one. Shore's work on the films has been called the greatest achievement in the history of film music, and consisted of over thirteen hours of original music with four hundred musicians. We just heard music from the main action sequence in the first film involving a battle with the Nazgul or Ringwraiths. Tolkien writes that nine rings of power were given to the kings of men, but through corruption and a desire for power, these nine kings became ghostly servants of Sauron, the main antagonist of the story. The title of this track from the Fellowship of the Ring soundtrack, A Knife in the Dark, is taken directly from the chapter heading of Tolkien’s book in which the hobbits are confronted by the ringwraiths, but saved by the mysterious ranger known as Strider.

Six Geese A-laying-Harold Arlen (1905-1986) Goose, Never be a Peacock Harold Arlen is a household name for fans of the Great American Songbook, but his music has also permeated a great deal of pop culture, as the composer of Somewhere Over the Rainbow, from The Wizard of Oz, a film that is traditionally broadcast during the holidays. Goose, Never be a Peacock, though often heard as a standalone number, was originally written for the 1959 Broadway musical Saratoga. The musical follows a revenge plot orchestrated by Clio, a Creole woman, and a cowboy she meets named Clint, against a railroad tycoon. Over the course of the show, Clio and Clint begin to fall in love as they continue to scheme. While the musical was well financed and impressive from a production standpoint. It’s story was panned by critics, who felt that romance stemming from a mutual love of vengeance would not connect well with most audiences.

Seven Swans A-swimming-Einojuhani Rautavaara (1928-2016) Cantus Arcticus Mvmt. III Swans Migrating It turns out that the Arctic circle is mostly quiet, except for the bird calls. Rautavaara dubbed this work a concerto for birds and orchestra, and it’s one of the most beloved pieces of contemporary Finnish music. The birdsongs heard in the work are actual recordings of wild northern birds from Finland near the Arctic circle, including migrating swans in movement three. Rautavaara, who passed away two years ago at age 87, was the most notable Finnish composer after Sibelius. He wrote in nearly every major genre, including ten operas, eight symphonies, eleven concertos, and various other works for orchestra, chamber ensemble, or voice. He also wrote in every major style from this time period, from neo-classicism and serialism, to post-modernism and chance music.

Eight Maids A-Milking-John Playford (1623-1686) The Merry Merry Milkmaid Many tunes are attributed to John Playford, but he probably did not write any of them. Playford was first and foremost a music publisher. Under the English Commonwealth, he began printing books on music theory, hymn psalters, instrument manuals and sheet music. His shop became a musical hotspot in London, so much so that Playford monopolized the business of music publishing in England. He was also a Royalist and briefly ran afoul of the law after printing and distributing reports on the executions of various nobility. After apparently evading arrest, he returned to printing music and produced his most famous work: The English Dancing Master. The book contained a manual for learning English country dances, as well as music for 500 dance tunes, of which the Merry Merry Milkmaids is number 27.

Nine Ladies Dancing-Rick Astley (b. 1966) She Wants to Dance With Me Have no fear listeners, you are not being rick-rolled, at least not yet. “She Wants to Dance with Me” was written and recorded by Rick Astley in 1988 as the lead single from his second studio album Hold me in Your Arms. Though it did not reach the enormous popularity of “Never Gonna Give You Up,” it was still commercially successful, placing #6 on the charts in the UK. Astley retired from music at age 27 in 1993, however he has had a career come-back when “rickrolling,” that is, tricking someone into clicking on a hyperlink which leads to a video of “Never Gonna Give You Up” became a popular internet meme. Initially reluctant to return the spotlight, the career boost has led Astley to tour again after a 14 year hiatus, and an appearance in the Macy’s Thanksgiving Day Parade, where he rickrolled the audience on live tv.