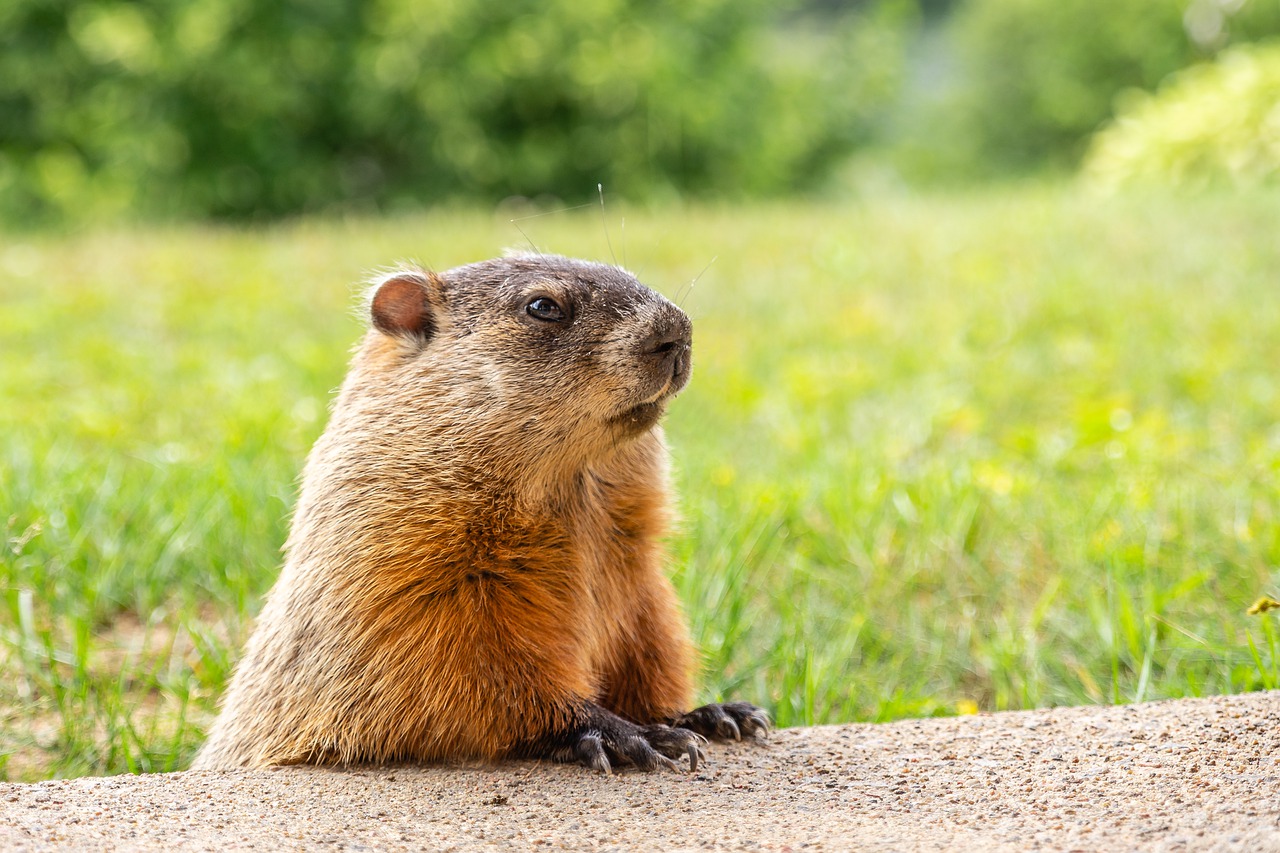 Groundhogs, Woodchucks and Whistle Pigs. This week we found pieces of classical music that nod to America's borrowing winter prophets in celebration of the holiday. Explore trivia surrounding the groundhog, and listen to our playlist below while we whether six more weeks of winter.

Antonio Vivaldi (1678-1741) The Four Seasons: 'Winter' in f, Op. 8, No. 4, RV 297 Mvt. II Largo To start things off we’re celebrating the groundhog as our yearly winter prophet with one of the most well-known concertos associated with this time of year. Vivaldi’s famed “Four Seasons” opens the composer’s opus 8 collection of violin concertos. However, although they were originally published side-by-side with several other concertos, these four have been singled out over time and become a set. In the score, each concerto is accompanied by a poetic sonnet by an anonymous author. Some have speculated that the poet may have been VIVALDI himself, although there is no hard evidence pointing to this conclusion. Also, because of the massive amount of anonymous poetry in print from this period, it is likely we will never know for sure. In the parts, specific indications let the performers know what’s happening in the “plot.” In depicting the coldest time of the year, this concerto evokes stamping feet, cozy fires, and wicked winter winds.

Peter Ilyich Tchaikovsky (1840-1893) Symphony No. 6 in b, Op. 74 'Pathétique' Mvt. III Allegro Molto Vivace In the comedic film Groundhog Day starring Bill Murray. Weatherman Phil Connors finds himself stuck in a time loop where he wakes up every morning on Groundhog Day in Punxsutawney, Pennsylvania. In classical music, we have our own version of a time loop, the perpetuum mobile as it’s known in latin or moto perpetuo in Italian. Meaning “perpetual motion”, it can stand for a kind of musical composition made up of a continuous stream of notes, often meant to be played rapidly, or it can also stand for a musical passage that is meant to be repeated an infinite number of times. Tchaikovsky uses the perpetuum mobile in the third movement of his sixth symphony, nicknamed the “Pathetique”. We can hear that once the notes begin, they never really stop for the whole duration of the movement, even as the melodic line is passed between the different sections of the orchestra.

Henry Purcell (1659-1695) Dido and Aeneas: 'Thy Hand, Belinda' and 'When I Am Laid In Earth' There are the beginnings of a cheesy Early Music joke in the inclusion of a Ground bass in a show dedicated to Groundhogs. This technique, where a bass line is repeated as the foundation of a piece, is used perfectly by Henry Purcell in the aria we just listened to. Though Henry Purcell was one of Britain’s most influential early Baroque composers, he only composed one opera, Dido and Aeneas, about the life and death of Dido, the Queen of Carthage. We hear the ground bass in her last aria When I am Laid in Earth. The bass line of Dido’s aria is more specifically called the “Lament Bass.” Its four notes, descending slowly by half-steps evoke deep sadness and musically depict the act of Dido being laid in her tomb.

Sergei Rachmaninoff (1873-1943) Rhapsody on a Theme of Paganini, Op. 43 There is no question that the most famous musical moment from the movie Groundhog’s Day is the alarm clock music that cues the beginning of the time loop: I Got You Babe, by Sonny and Cher. However, some classical music also appears in a memorable moment in the film, when Bill Murrey impresses his love interest (played by Andie MacDowell) with piano skills he has perfect while stuck in the time loop. Although he mostly plays jazz, the most intimate moment in the scene occurs when Murrey switches to this music by Rachmaninoff: Variations on a theme by Paganini. Not only is this one of Rachmaninoff’s most popular pieces, it quotes one of Paganini’s most notable works, the last of his caprices for solo violin.

Ludwig van Beethoven (1770-1827) Eight Songs, OP. 52: No. 7 'La Marmotte' It is not often that we can say Beethoven was outshined by another composer, but in the case of German lieder, or art song, that seems to be the case. We often think of Schubert as the king of German lieder, but Beethoven was a pioneering composer of the genre, and one of the first of the era to write songs that complimented deep poetry and prose. The seventh piece in his collection of eight lieder is a short one, and the only piece in the WFIU music library that directly addresses a groundhog or “Marmotte” in french. The text is taken from a children’s song that Beethoven heard performed in a play by Johann Goethe in 1770, in which the subject sings of traveling the world with a pet groundhog. During the late 18th century, some groundhogs were kept as the European equivalent of the barrel organ monkey, trained by street performers to do tricks and entertain audiences.

Béla Bartók (1881-1945) Mikrokosmos: Book VI From the Diary of a Fly There are several explanations for the origin of the name “Punxutawney,”  the town in Pennsylvania where the official Groundhog Day groundhog, Punxutawney Phil, lives and makes his official winter proclamation at a yearly festival. The Shawnee and Lenape Indians who inhabited the region had several names and stories for the area which refer to its abundance of flies and mosquitos, which apparently was so severe that many early inhabitants of the land were driven away. However, when the area was overtaken by settlers, they drained the many swamps, exterminating the flies and leaving only the name. Now flies can be annoying, but their buzzing has inspired a few composers, including Bartok, who used the buzzing of the fly as an opportunity to write a chromatic exercise in his extensive collection of short progressive pieces Mikrocosmos. Titled “From the Diary of a Fly” this piece mimics the buzzing and movement of a fly as it is caught in a spider’s web.

Glen Miller (1904-1944) The Woodchuck Song This recording of the familiar tongue twister, written in the big band style that had been popularised by the many appearances of the Glenn Miller Orchestra on radio and film, was actually released several years after Glenn Miller had disbanded his orchestra and joined the army. Unfortunately he would disappear on an ill-fated flight to Paris, never to be found. However his legacy lived on in several orchestras which were specifically formed to play his arrangements, assisted by an official method for orchestration Miller published in 1943. The Woodchuck Song comes from that era of arrangements, where Tex Beneke, who sang and played tenor saxophone in the original Miller Orchestra, became a bandleader in his own right.

Maurizio Cazzati (1620–1677) Ballo della Ombre ("Dance of the Shadows") Cazzati is fairly unknown today, but during the mid-seventeenth century he was a successful music director throughout the many Italian cities surrounding Mantua, where he was born. In 1657, he was so in-demand that he was given the prestigious position of chapel director at the Basilica of St. Petronio without the normally required audition. Though he published sixty-six volumes of music, Cazzati is most remembered for his instrumental works, especially his dances, or Ballo in Italian. The titles of Italian dances often match the character of the dancing rather than the accompanimental music. Cazzati’s Ballo della Ombre or Dance of the Shadows for example, was probably danced before an audience for entertainment and references the dark, wispy costumes the dancers would be wearing. It’s on our playlist this evening as a nod to the sworn enemy of Punxutawney Phil, his shadow, which brings six more weeks of winter.

Traditional (Anne Warner rec. 1984) Ground Hog We just heard bluegrass and folk rock family band The Dilliards perform a bluegrass classic: Groundhog. If those high lonesome voices sound familiar, it might be because you’ve heard them singing the folk song Dooley on the Andy Griffith Show.The band was  renamed for a multi-episode run on the Andy Griffith Show as the Darlings, and first appear when the family band comes down from the backwoods of Mayberry County into town, led by their jug-playing paterfamilias, Brisco Darling, played by Denver Pyle. Although these sit-com appearances are the Dilliard’s biggest claim to fame, they were also one of the bands to join Elton John on his first American tour, and the first touring bluegrass band to use electrified instruments.