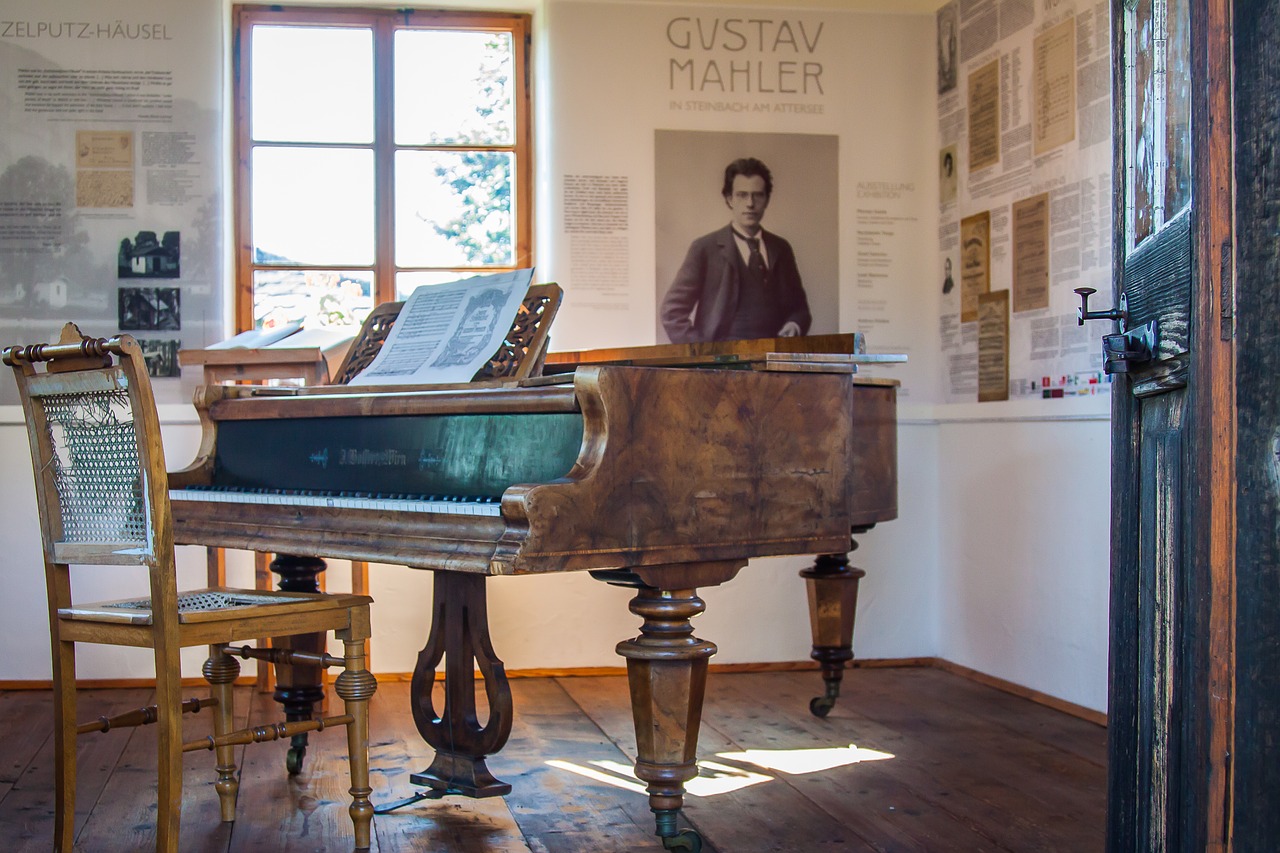 As we celebrate Gustav Maher's birthday this week, We look at how his music and life influenced the course of music history and the style of many composers. Browse our playlist of musical highlights in Mahler's life and those who knew his music.

Ludwig van Beethoven (1770-1827) Symphony No. 9 in d, Op. 125 Gustav Mahler feared the “curse” of composer’s deaths after their ninth symphony, and is credited by some historians as even creating the superstition, which began with Beethoven’s death after writing this symphony. After completing his eighth symphony in 1907, Mahler turned to a collection of Chinese poetry as an inspiration for his next work, Das Lied von der Erde [The Song of the Earth]. He considered his next work, now known as his ninth symphony, to actually be his tenth symphony. In avoiding the curse, he was just buying time—he only completed one movement of what was to be his actual tenth symphony before he died. About this curse, Schoenberg wrote, “It seems that the ninth is a limit. He who wants to go beyond it must pass away. It seems as if something might be imparted to us in the Tenth which we ought not yet to know, for which we are not ready. Those who have written a Ninth stood too close to the hereafter.”

Wolfgang Amadeus Mozart (1756-1791) Don Giovanni Don Giovanni is an extraordinary opera for many reasons, one of which was that it served as a matchmaker in 1890 for two unlikely friends: Johannes Brahms and Gustav Mahler. By the end of the 19th century, Brahms, then middle-aged, was enjoying wide-spread fame throughout Europe for his musically conservative aesthetics that, while innovative, took inspiration from the past. Mahler, then only 30 but already turning heads as director at the Budapest Opera house, was the opposite: a forward thinking Wagnarian. The story goes that Brahm’s friends convinced him to attend Mahler’s production of Don Giovanni. Brahms was very skeptical, believing that the production would be like most other versions of the Mozart opera at that time: heavily edited for 19th century tastes. He recieved a very different performance, what Mahler called “Authentic Mozart.”, having re-inserted the original recitatives back into the opera. Brahms apparently rushed onto stage and embraced Mahler after the first act, and so began a friendship that would last many years.

Richard Wagner (1813-1883) Tristan and Isolde: Prelude to Act I Along with many of his fellow students at the Vienna Conservatory in the late 19th century, Gustav Mahler was enchanted by the music of Richard Wagner. He would go on to become a figurehead of the Wagnarians: composers and artists who believed their work continued the musical revolution that Wagner’s operas had started. Mahler wrote that Wagner was one of the few composers that “wrote anything worthwhile about music.” Even before he was a respected composer, Mahler made a name for himself as a chief interpreter of Wagner’s opera. He saved the genre from dying out in Prague and introduced British audiences to Tristan und Isolde in 1892. A young Ralph Vaughn Williams attended his London performance, and was more impressed by Mahler’s conducting than Wagner’s music. Vaughan Williams would never embrace Wagnerianism, but inspired by Mahler’s command of the podium, he would himself become a symphonic conductor.

Dmitri Shostakovich (1906-1975) Symphony No. 6 in b, Op. 54 In general, Shostakovich has enjoyed a reputation among musicologists as a composer whose style is deeply singular, rooted in a personal identity, and Soviet and Russian history. In the past 10 years though, historians have emphasized a connection between Shostakovich’s style and Mahler. Shostakovich studied plenty of Mahler’s music, and was transcribing an Adagio from Mahler’s 10th Symphony as a piano duet while he was working on tonight’s selection: his 6th Symphony. He would even go on to quote Mahler’s Resurrection Symphony in his own 10th Symphony many years later. As for the whole timeline of Shostakovich’s works, most agree that you start to hear the influence of Mahler from his 4th Symphony onward, but some argue it's actually there from the beginning, as far back as his first symphony in 1924. .

Giuseppe Verdi (1813-1901) Il Trovatore: Ballet music from Act III In 1880 Mahler was completing courses at Vienna University when he obtained his first post as a conductor. It was a summer position for a small wooden theatre at a spa in Bad Hall, in Upper Austria. The theatre's scant resources and light programming did little to fulfill Mahler's artistic aspirations, but it proved to be an important stepping stone in his career to an engagement at the much more professional and ambitious Landestheater in Laibach. It was there that Mahler conducted his first opera, Verdi's Il Trovatore, when he was 21. He would go on to conduct around 50 operas and operettas at the theatre in Laibach, with a program of mostly German and Italian composers including Rossini, Donizetti, Mozart and Weber.

Alban Berg (1885-1935) Violin Concerto 'To the Memory of an Angel' Subtitled “To the Memory of an Angel,” Alban Berg’s violin concerto was written in memoriam for Manon Gropius, daughter of the architect Walter Gropius and Alma Mahler, who died from polio while she was still a teenager. Manon was especially beloved among Berg’s circle of colleagues and friends and her death caused the composer to halt progress on his opera Lulu in order to compose a violin tribute in Manon’s memory. Tragically, Berg himself died unexpectedly only a few months later, due to an infection arising from an insect sting. This left Lulu unfinished and made the Violin Concerto not only his last fully realized work, but one that would serve as his own memorial as well as that of Manon’s.

Alma Mahler (1879-1964) Erntelied [Harvest song] Alma Schindler married Mahler in 1902. She grew up in an artistic family, being the daughter of the famous landscape painter Emil Schindler. She played piano from childhood and was encouraged to study composition. Her mother's second marriage to the painter Carl Moll brought her in close contact with the Viennese Secession, a modernist art movement closely related to Art Nouveau. This connection would put Mahler in contact with many modern Viennese composers, and gave him the opportunity to present chamber music at a Secession exhibition in 1902. Alma had her own aspirations as a composer that Mahler unfortunately did not support, this would be one of many problems in their relationship. However he would come to regret this and later helped edit and publish five songs she wrote for voice and piano. 17 songs by her survive, 14 of which were published, though it is known she also composed chamber music and a scene for an opera.

Alfred Schnittke (1934-1998) Symphony No. 5/Concerto Grosso No. 4, Allegro Alfred Schnittke was born in 1934 in Engles on the Volga River in the former Soviet Union. He completed his studies in composition at the Moscow Conservatory in 1961 and joined the Union of Composers the same year, supporting himself by writing primarily film scores, completing the scores for more than sixty films by 1984. Schnittke is best known for an idiom he developed which has come to be known as “polystylism” in which Schnittke incorporated a wide range of genres and styles. Mahler became a part of that idiom with Schnittke’s 5th Symphony. Various aspects of Mahler’s juvenalia are quoted throughout the work, and the entire second movement of the symphony is an elaboration of Mahler’s unfinished piano quartet.

Ian McDonald, Pete Sinfield (1969) The Court of the Crimson King The English progressive rock band King Crimson decided to produce their debut album In the Court of the Crimson King independently after two unsuccessful attempts to lay tracks with Moody Blues producer Tony Clarke. The band had just opened for the Rolling Stones in front of 650,000 people at Hyde Park, and were dissatisfied that they were not achieving the electrifying energy and drama in the studio that they experienced in live performance. The album was recorded between gigs in three grueling days, and when released in August of 1969, the much anticipated record went straight to the top of the UK charts. The last track The Court of the Crimson King began as a simple folk-inspired song. However King Crimson’s keyboardist Ian McDonald, who had studied Mahler’s orchestrations, rewrote the song in an epic symphonic style. This sound was achieved by overlaying multiple recordings of the mellotron, a hybrid electric and mechanical analog keyboard that used rotating tape of pre-recorded samples attached to a key mechanism.