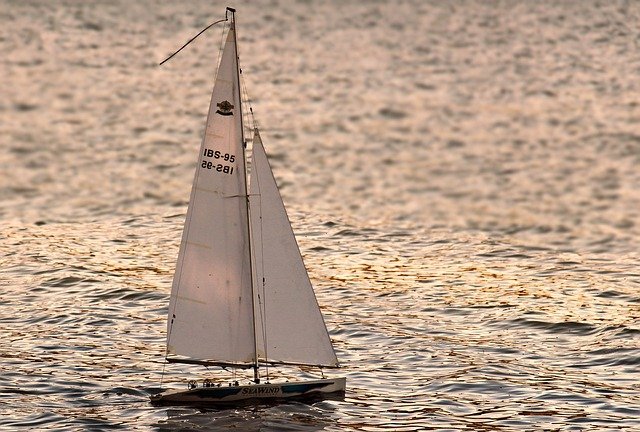 This week, we are back in the sea, but listening to music dedicated to what floats on top of it. Browse our playlist of music for boats, barges, barques and gondoliers from our show titled "Yacht Rock."

Jacques Offenbach (1819-1880) Tales of Hoffman: Barcarolle Perhaps his only other composition to match the fame of his scandalous “Galop Infernal” Offenbach’s barcarolle Belle nuit, o nuit d’amour from the third act of his opera fantastique “The Tales of Hoffmann” is one of the most recognizable themes in classical music. The courtesan Giulietta sings this famous aria, attempting to seduce Hoffmann so she can steal his reflection in exchange for a diamond. With the final act of the opera set in Venice, the barcarole is an appropriate choice to open the scene, as the vocal genre has Venetian roots. These songs are meant to imitate the music of gondoliers and evoke a romantic image of boats being pushed through Venice’s many canals. Nearly all barcaroles are in 6/8 meter to give the music a gentle lilt, like the rocking of a gondola.

Richard Wagner (1813-1883) The Flying Dutchman: Overture The maritime lore of the “Flying Dutchman” goes back to the 17th century. By the time Wagner had gotten his hands on it in 1840, the story was the stuff of romantic myth—a weirdly luminous ship doomed to sail the seas forever, or at least in Wagner's version, until its captain wins the love of a virtuous woman named Senta. How, exactly, he manages to “fly” is another question. In some sources, the flying ship refers only to its superhuman speed, but in others it is quite clear that the ship was sometimes seen hovering above the horizon. Modern speculation has suggested that this might have been a phenomenon known as Fata Morgana, or a mirage-like optical displacement. While the opera uses a variety of sources, including a satirical telling of the tale by Heinrich Heine, the love story of the ghost ship's captain takes inspiration from Sir Walter Scott's novel The Pirate.

Franz Schubert (1797-1828) Auf dem Wasser zu singen [To be Sung on the Water], D. 774 Schubert’s marvelous song “Auf dem Wasser zu singen,” with poetry by Leopold Graf zu Stolberg, is written in the style of a barcarole, a Venetian folksong usually in 6/8 time, that was typically sung by a gondolier. The text, about someone becoming lost in time as he sits on a boat gliding across the waves, seems to confirm this barcarole style. Schubert composed this song during a time when he was particularly focused on water: he was simultaneously working on Die Schöne Müllerin, a song cycle about a man who follows and eventually drowns himself in a brook. The rolling piano part to “Auf dem Wasser zu singen” is especially memorable and especially challenging. It was made even more challenging by composer FRANZ LISZT, who transcribed the work for solo piano, including the vocal melody within the piano texture, and adding a virtuosic Lisztian coda to the end.

Felix Mendelssohn (1809-1847) Song Without Words Op. 19, No. 6 'Venetian Gondola Song' Mendelssohn’s Songs Without Words is comprised of 8 volumes with 6 pieces each. They were composed over a wide period of the composer’s life. The pieces were intended primarily for amateurs as the piano became a dominant fixture in the 19th century home. The “Venetian Gondola Song” is considered to be one of the pieces from this set that comes close to actual song. Gondolas likely started appearing in Venice in the 11th century. By the 16th century, ten-thousand gondolas could be seen maneuvering the canals of Venice. It was originally used as a transport for the rich. Today, it is primarily used by tourists. Gondolas are customarily painted black.  This was mandated in a decree made by the Doge (dohzh) of Venice in 1562, which declared that only gondolas bearing important people could be decorated.

Manuel de Falla (1876-1946) Canto de los remeros del Volga The Russian folk song “The Song Of The Volga Boatmen” dates back to at least 1866. It was first collected by composer MILY BALAKIREV that year, and published in his collection of Russian folk songs. This was not a sailor song, but rather the song of Russian burlaks, low-class barge-pullers who toted ships upstream on the Volga River. It’s become one of Russia’s most popular folk songs, arranged by Igor Stravinsky, Alexander Glazunov, and sung by countless Russian basses. It has even been given a cross-cultural treatment when Spanish composer Manuel de Falla transcribed the song and made it a concert piece for solo piano, at the request of his friend Ricaro Beazza. While de Falla’s arrangement explores new harmonic potential, he manages to retain the deep melancholy inherent in the folksong.

Giacomo Meyerbeer (1791-1864) La Barque légère Though he is most associated with the drama and spectacle of grand opera, Meyerbeer also wrote a body of salon music for wealthy patrons who supported and enjoyed his work. Influenced by his contemporary Rossini, who had started writing vocal art songs in the 1830’s for Parisian “soirées musicales,” Meyerbeer approached celebrated German and French poets for inspiration and source material, many of whom had already worked with Schubert on his famous repertoire of lieder. Meyerbeer took a more laid-back approach in setting poetry to music, believing there was already much music in the words alone. La Barque légère by the poet Joseph Naudet describes an episode between a boatman, Lucas, who seduces a shepherdess, Lise. He steals her away for a tryst on the water but is interrupted by a storm. Lucas guides the boat to safety, telling Lise not to worry as their boat is “light and driven by love,” but midnight has struck and Lise must go. Meyerbeer’s quaint accompaniment emphasises the wry irony in the amorous situation.

Granville Bantock (1868-1946) Barcarolle Until the age of 20, British composer Granville Bantock was educated with the idea of entering the civil service in India.  He changed his mind, and attended the Royal Academy of Music instead.  There, Bantock began to develop a taste for the unconventional in music.  He also recognized genius in others, and was one of the first to champion the music of Sibelius outside Finland, who became his lifelong friend.  For a time during his life, Bantock’s music was widely performed and he received many honors, accepting only the knighthood offered to him by the British government.  Although he was a prolific composer, his predilection for large-scale works eventually proved a bit of a handicap when it came to securing performances for his masterpieces. However his chamber works, like this Barcarolle, remained popular during his lifetime. Bantock had a long and productive life, dying at the age of seventy-eight.

Thea Musgrave (b.1928) Turbulent Landscapes: Sunrise, with a Boat between Headlands  In 2003, the Scottish composer Thea Musgrave wrote an orchestral suite of six movements, with each movement inspired by an artwork painted by JMW Turner depicting a turbulent event.  Each movement in the suite is musically independent, however they all share a common trait in that each has a musical “protagonist” represented by a solo player from the orchestra. The last movement, inspired by a likely unfinished seascape, ends the turbulence of the entire orchestral suite on a still, tranquil moment. The canvas portrays a thick fog which hides looming cliffs, while a far-off foghorn alerts a ship of imminent danger. The morning sun rises and sweeps away the fog, revealing a safe path for the ship to sail into open sea. All seems to be well, however Musgrave indicates with a brief recurrence of the musical theme from the first movement that there may be sea monsters in the deep ocean.

Christopher Cross (b. 1951) Sailing Although we borrowed the term “Yacht rock” for the title of this week’s show, the term’s true association is with a style of soft rock from the late 70s and early 80s. Kenny Loggins, Michael McDonald, and Christopher Cross were three of the founding fathers of what they, at the time, called the “West Coast Sound,” a synthesis of smooth jazz, soul, R&B and disco. The instrumental tracks and production quality of this music were surprisingly complex, due to the fact that many of its original performers and producers were highly experienced session musicians, working in the heart of the entertainment industry. In 2005, the aesthetic of the music came to be associated with popular southern California leisure trends, such as sailing,  and the name “Yacht rock” was born. Since the genre is often retroactively applied, not many yacht rock classics are about sailing. However this track from Christopher Cross’s debut album is an exception.  Other notable creators of “Yacht rock” include Steely Dan, Toto, the Doobey Brothers, and even MIchael Jackson.