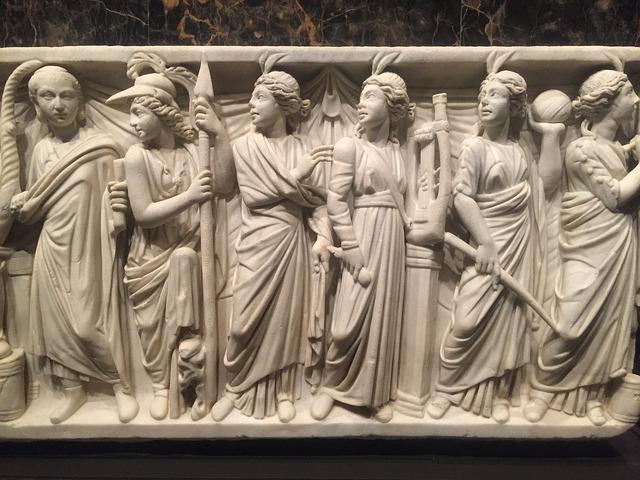 We dedicate nine rounds of Ether Game to the nine ancient Greek muses of drama, poetry and art. Ascend Parnassus with the Ether Game Brain Trust and browse this week's playlist.

Wolfgang Amadeus Mozart (1756-1791) Te Deum laudamus, K. 141 Mozart made his mark on every genre of art music during the early Classical era, and although he seemed to delight most in his operas, violin concertos and keyboard sonatas, his sacred works were most personal to him, having been raised strictly catholic. Polyhymnia is the muse of hymns, and the Te Deum, or Te Deum Laudamus (To Thee God we praise) is one of the earliest surviving latin hymns, appearing first in writing in AD 387 but probably composed even earlier. Mozart’s most famous Te Deum setting appears in his unfinished Mass in C minor, but K141 is a standalone piece, written in 1769 before the 13 year old Mozart made his first journey to Italy with his father Leopald. Mozart modeled the work after another Te Deum setting written by Michael Haydn, and for that reason, its authenticity was questioned for many years.

Antonín Dvorák (1841-1904) Humoresques, Op. 101: No. 1: Vivace in E flat minor We just listened to the first in a cycle of Eight Humoresques or Humoresky (in Czech) that Dvorak composed in 1894. Those who have been students of music would probably most  recognize No. 7, with its staggered rhythm and  tuneful melody, became a popular piece for children. Thalia is the muse of comedy, and what better musical genre to give her this evening than the humoresque? which, like the scherzo and buffo, is defined by its comedic quality.  Although Dvorak’s stint as a music educator in the United States lasted only three years, he collected many melodies while he was there, and upon returning to Bohemia, set several of them to music. These settings evolved into the Humoresques, which were published first in Germany and quickly throughout the rest of Europe and the US.

Richard Strauss (1864-1949) Salome, Op. 54: Dance of the Seven Veils Eroticism, the domain of the muse Erato, is prevalent in many pieces of classical music (we even did a Musical Erotica show many years ago on Ether Game). Strauss’s adaptation of the story of Salome remains one of the most infamous classical works of the late 19th century. According to the Gospel of Matthew, on King Herod’s birthday, his step-daughter performs for him a dance that so pleases the king, he offers anything to Salome as a reward for her performance. She asks for only one thing: the head of the imprisoned John the Baptist on a silver platter! Strauss’s opera, based on a play by Oscar Wilde, amps up the sexuality and blood-thirstiness of the lead character, turning her dance into the erotic “Dance of the Seven Veils.” The salaciousness of the dance, and the amount of veils remaining on Salome at its conclusion, vary from production to production. It depends on the discretion (or lack thereof) of the director and soprano.

George Chadwick (1854-1931) Euterpe Though he is probably better known for being an early developer of grand symphonic music in a uniquely “American” style, George Chadwick also looked to Greek mythology for inspiration. Three concert overtures written between 1883 and 1903 are named for different muses, including tonight’s selection titled Euterpe, after the muse of music. There is a sixteen year gap between Chadwick’s second overture and Euterpe, and though he was considered a conservative composer, Euterpe belongs to his “dramatic” period, demonstrating how Chadwick was experimenting with heightened drama and a broader range of emotional expression. The overture was premiered by the Boston Symphony in 1903.

Michael Praetorius (1571-1621) Terpsichore: A Suite of Dances Considered one of the most well-known musical works from the Renaissance, Michael Praetorius’ collection of 312 French dances, known as Terpsichore, was named after the Greek muse of the same name.  Ruler over dancing and dramatic chorus, the name Terpsichore literally means "delight in dancing.”  Dancing was one of the chief delights of the French aristocracy from the Medieval era through the Baroque period. It accompanied almost every type of non-liturgical or social gathering. Even solemn occasions had slow moving, refined dances that followed ceremonial activities. Unlike the country dances printed in manuscripts in England, The French courtly dances required training to learn the steps and movements. These would have been learned by professional theater dancers, as well as courtiers and lower nobility. The music of Praetorius’ Terpsichore would accompany this kind of dancing, which is why the music is more stately and refined than the raucous tunes printed in Playford’s English Country Dances.

Henryk Górecki (1933-2010) Symphony No. 3, Op. 36 'Symphony of Sorrowful Songs' Mvmt. III A contemporary of Penderecki and Lutoslawski, Polish composer Henryk Gorecki was perhaps best known for his Symphony No. 3. While most symphonies usually contain a mixture of fast and slow sections, Gorecki’s haunting and sorrowful work comprises three slow movements. The text for the 2nd movement, which we heard in tonight’s selection, comes from a prayer, that was inscribed on the wall of a cell in the basement of the “Palace,” The gestapo headquarters in Zakopane. Beneath the words is the signature of a young woman, and the words “18 years old, imprisoned since September 26, 1944.” Although there are seemingly several references in this work to World War II, Gorecki refrained from labeling the work as a “war symphony,” calling it instead “a normal Symphony of Sorrowful Songs,” making it choice music for the muse of tragedy, Melpomen. In the early 1990s, when this specific recording was released, it became a best-selling CD, selling over one million copies.

Tan Dun (b.1960) Marco Polo: The Book of Time: Spring: Such A Moment No doubt when you are writing an opera based on historical events, you would ask for inspiration from Clio, the muse of history. Tan Dun’s 1996 opera takes Marco Polo’s historic travels and splits it into two journeys with two leading characters. A mezzo soprano plays Marco as the historical figure who makes the physical journey from Italy to China. This narrative is performed in Western operatic style. However Polo, who is played by a tenor, represents the traveler’s Memory on its spiritual journey through three states of being, which is performed in the style of Peking Opera, with its own set of traditional instruments. The two narratives are closely intertwined and sometimes happen simultaneously, with the vocalists alternating words in the same sentences.

Kelly Marie-Murphy (b. 1964) Dark Energy For the ancient Greeks, the arts and sciences were closely linked. They both required the same source of divine inspiration, which is why alongside the muses of poetry and music we have Urania, the muse of astronomy. The idea that harmony is “the music of the spheres” resonating in the soul also began in ancient Greece, so it is easy to see why Urania was the eldest muse. There are many composers who have been intrigued by astronomy, including Canadian composer Kelly-Marie Murphy, whose 2007 string quartet Dark Energy was inspired by the Hubble telescope’s role in discovering the anti-gravitational force known as dark energy. Dark energy remains one of the greatest mysteries of the universe, but we know it is what causes the universe to continue to expand at an increasing rate.

Eric Clapton, Martin Sharp (p. 1967) Tales of Brave Ulysses You might only know the fairground organ named for her, however Calliope would’ve been considered chief of all muses by the likes of Homer and Virgil, as she inspired heroic and epic poetry. Perhaps it was she who inspired Australian pop artist Martin Sharp to write the poem which became the lyrics to Cream’s track, Tales of Brave Ulysses. The song was a B-side single and later appeared on Cream’s second album Disraeli Gears, whose cover art was also designed by Sharp. The track is notable for being one of the first recorded examples of an electric guitar using the“wah-wah” pedal, which was invented a year earlier in 1966.