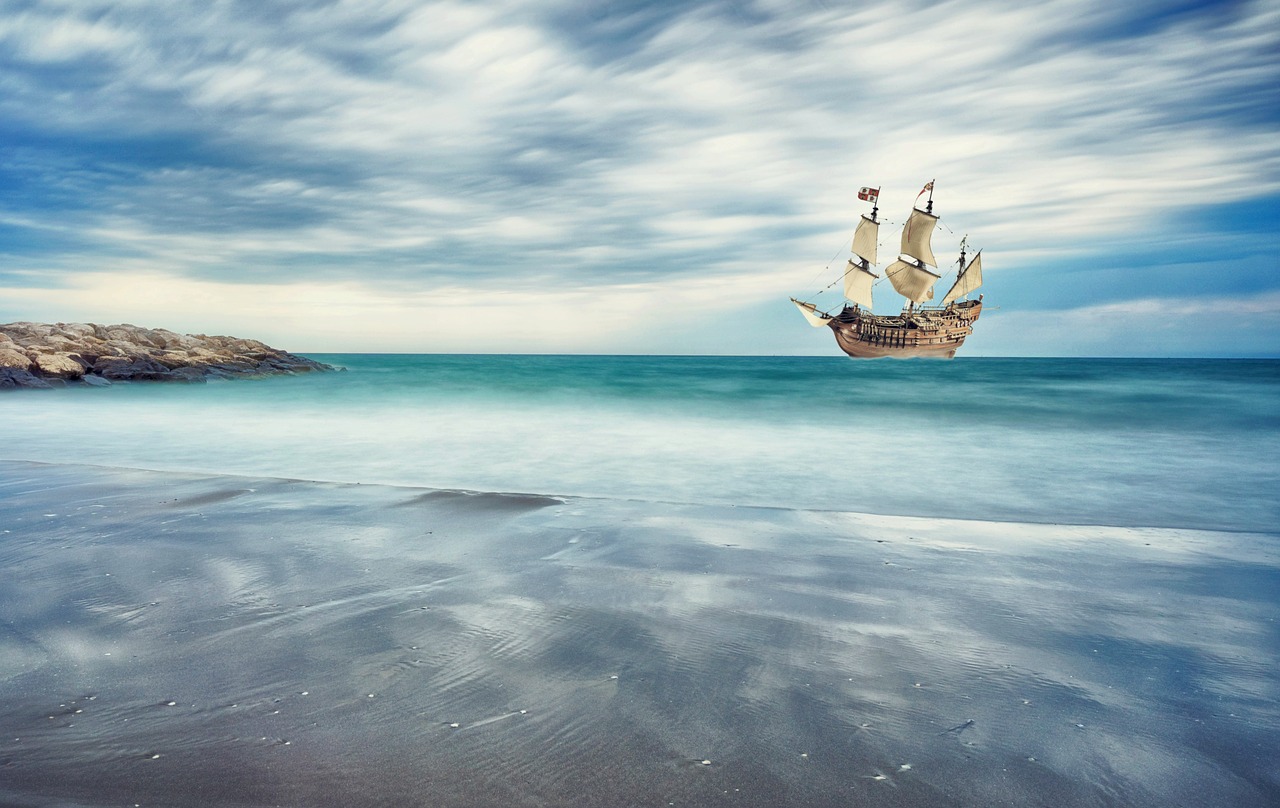 For centuries, composers have found music in the rolling, majestic image of the ocean. Browse nine of our favorite sea-themed classical pieces below.

Rimsky-Korsakov, Nikolai (1844–1908) SCHEHERAZADE: The Sea and Sinbad's Ship In the 1880s, composer Nikolai Rimsky-Korsakov was suffering from writer’s block. He wanted to write an opera, but didn’t feel up to the task. So, Rimsky-Korsakov occupied himself with a few “distractions.” While distractions for you or me might mean reading a book, or binge watching a TV show, for Rimsky-Korsakov it meant writing orchestral music instead of opera. Between 1887 and 1888, he composed three orchestral works—Scheherazade, the RUSSIAN EASTER OVERTURE, and the CAPRICCIO ESPAGNOL—all three of which are still famous to this day. Scheherezade, based on the One Thousand And One Arabian Nights, tells the story of the Sultan (represented by the burly brass theme) and his wife Scheherazade (represented by the “Eastern” sounding violin theme). Scheherazade avoids the wrath of the Sultan by telling him stories every night for 1000 nights. These include stories about the legendary sailor Sinbad and his many adventures.

Vaughan Williams, Ralph (1872–1958) A SEA SYMPHONY: A Song For All Seas, All Ships In his first symphony, entitled A Sea Symphony, Ralph Vaughan Williams uses the poetry of WALT WHITMAN as a cosmic vessel of expression. This work deals with more than just a journey on the seas themselves. Owing its deepest meaning to WHITMAN’S poetry, it is an expression of a journey through life. The idea of a spiritual journey as opposed to a religious one appealed to the agnostic Williams. The philosopher Bertrand Russell quoted him once asking, “who believes in God nowadays anyway?” This vast work requires a large orchestra and full chorus, and took six years, from 1903 to 1909, to complete. Twenty years later, Vaughan Williams returned to Whitman for his epic cantata Dona nobis pacem. Like his Sea Symphony, the cantata featured a gigantic chorus and orchestra, and pulled quotes from Whitman's poetry that explored the deeper side of the human condition.

Reinhold Glière (1875–1956) THE RED POPPY: Russian Sailor's Dance The 1927 ballet The Red Poppy by Russian composer Reinhold Glière tells the story of a group of sailors from different countries docking in a seaport in CHINA. Upon arriving, the Russian ship captain notices the cruel harbormaster overworking the laborers on the dock. The captain takes pity on the workers and tries to free them. Upon seeing the Russian captain’s kindness, a young Chinese woman named Tao presents him with a red poppy as a symbol of her love. Tao’s employer becomes jealous of her affection towards the captain, and after a scuffle, she is killed. The Red Poppy, with its socialist overtones, became the first “revolutionary” ballet in Russian history, and the “Russian Sailor’s Dance” has since emerged as a popular concert piece within the symphonic repertoire. The ballet has also seen return performances with significant changes including the addition of a new character: Nüwa, the ancient Chinese goddess of fertility.

Mendelssohn, Felix (1809–1847) CALM SEA AND PROSPEROUS VOYAGE Mendelssohn’s programmatic concert overtures are among his most popular works. Written in 1828, when the precocious composer was only nineteen, this overture was written after his Midsummer Night’s Dream overture, but before the similarly sea-inspired Hebrides overture. The sources of the program were two poems by German philosophical luminary and all-around man-of-letters Johann Wolfgang von Goethe. While it may seem that the dovetailing of subjects of the two poems might be a natural conclusion, Mendelssohn was almost certainly inspired by an earlier treatment of the same two poems by BEETHOVEN, bearing the same title. While Beethoven set the text of the poems in a short cantata for chorus and orchestra, Mendelssohn’s entirely orchestral work leaves the image-making entirely to the effective music.

Arthur Sullivan (1842–1900) H.M.S. PINAFORE: Overture The Royal British Navy was not immune from the merry pranks of Gilbert and Sullivan. H.M.S. Pinafore is in part a criticism of the cronyism found among the incompetent ranking officers. Pinafore originated from a collection of light verse by librettist W.S. Gilbert called BAB BALLADS, which were part comic strips, part poetry. He wrote and illustrated these ballads before adding his ‘topsy-turvy’ voice to the musical stylings of Arthur Sullivan. Their collaboration on Pinafore was such a success that they themselves fell victim to pirates, though not on the high seas. Several unauthorized productions popped up in the U.S. This only benefitted Gilbert and Sullivan as these pirated versions made them famous in the states. Afterwards, Gilbert and Sullivan took measures to assure that their next nautical creation, Pirates of Penzance, would not suffer the same fate by premiering it first in New York and then London.

Henry Purcell (1659–1695) DIDO AND AENEAS: Overture Henry Purcell’s Dido & Aeneas has long been regarded as the first great opera in the English language. It’s ironic that this great work, which clocks in at just under an hour, received its world premiere at a BOARDING SCHOOL. With a story loosely based on an episode from Virgil’s Aeneid, the opera revolves around the ill-fated love affair of Aeneas, a brave prince returning home to Italy from the Trojan Wars, and Dido, the Queen of Carthage. The story moves from Dido's elegant court to the cave of an evil sorceress, but the final act begins on a harbor in Carthage just as Aeneas and the Trojan fleet are about to depart. In true opera fashion, the first music we hear in Act three is a sailor's song and chorus. Purcell imbued the music with a folk-tune like quality, a technique which he used often in his songs for the theater.

John Adams (b. 1947) THE DEATH OF KLINGHOFFER: Ocean Chorus John Adams and librettist Alice Goodman had already turned recent history into opera in “NIXON IN CHINA,” but unlike their first opera, which featured a life-size prop of Air Force One, their new collaboration surrounded a fateful day on the ocean liner Achille Lauro in 1985. Their opera “The Death of Klinghoffer” hit a raw nerve with many audiences when it was introduced in 1991. It examines the hijacking of a cruise ship and the murder of a Jewish hostage by Palestinian terrorists, using this crime to examine the Israeli-Palestinian conflict. Many thought the opera was biased in its humanizing of the hijackers, or that its refusal to accept simple moral dichotomies was unethical, or that the whole thing was simply in bad taste. Over twenty years later, the opera is still gathering a tumultuous performance history, with the Metropolitan choosing to cancel live HD broadcasts of the work in 2014.

Paul Gilson (1865–1942) THE SEA: Sailor's Dance Belgian composer Paul Gilson represented the best of Flemish music at the turn of the 20th century. Like many Belgian composers, he was strongly influenced by the works of Wagner and the Russian nationalists. In 1889, Gilson won the prestigious Prix De Rome competition. However, this was not the French Prix De Rome that Debussy won around the same time, but rather the Prix De Rome set up by the Belgian government to award their finest artists and musicians. Gilson’s most famous work is the orchestral piece La Mer (The Sea) with its scherzo second movement “Sailor’s Dance.” Gilson’s La Mer also predates Debussy’s La Mer by a few years. Gilson later taught at conservatories in Belgium, influencing the next generation of Belgian musicians. In 1925, his students would even band together to create their own musical collection known as “Les Synthétistes,” the Belgian counterpart to France’s “Les Six.”

Stan Rogers (1949–1983) NORTHWEST PASSAGE Born in Ontario, Canada, Stan Rogers was one of the most beloved Canadian folk musicians. He was especially interested in capturing the unique musical and cultural identity of Canada, and Ontario’s deep rooted nautical culture. We just heard one of his best known songs “Northwest Passage”, the title track of his 1981 album of the same name. The song describes the expeditions of 19th-century explorers SIR JOHN FRANKLIN, ALEXANDER MACKENZIE, and DAVID THOMPSON as they attempted to find the Northwest Passage to the Pacific ocean. In the song, Rogers poetically compares their dangerous trials by sea to the ease of travelling northwest by car in the 20th century. He wrote the song in one night, but sadly, it would be one of the last songs he recorded. His life was cut tragically short in a plane fire in 1983.