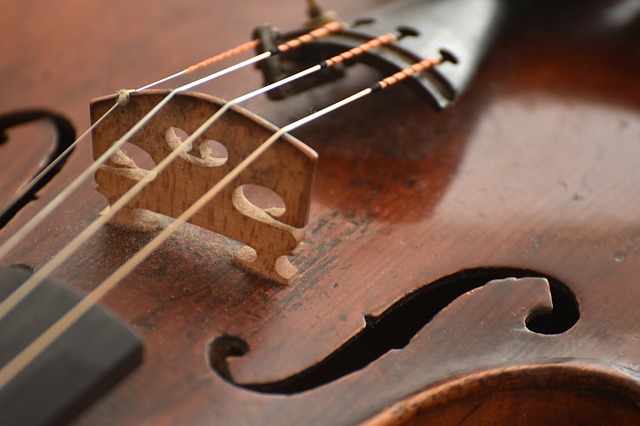 Put down the bow in favor of a good pickin' hand this week on Ether Game! Browse nine of our favorite pizzicato-heavy selections from this week's plucky show and enjoy some trivia as well.

Benjamin Britten (1913-1976) Simple Symphony, Op. 4: Playful Pizzicato Britten completed the Simple Symphony when he was only 20 years old, a fresh-faced graduate of the Royal College of Music in London. But the melodies are all derived from his juvenalia, the melodies from his youth, which he wrote as a prep-school boy. Each movement has an appealing and alliterative appellation, including a “Boisterous Bourée,” a “Playful Pizzicato,” a “Sentimental Sarabande,” and a “Frolicsome Finale.” The “Playful Pizzicato” has become especially popular. It makes several appearances in the 2012 film MOONRISE KINGDOM by the quirky American director Wes Anderson. Other works by Britten appear in the film as well, both diegetically and non-diegetically, including The Young Person’s Guide To The Orchestra and his children’s opera Noye’s Fludde.

Antonio Vivaldi (1678-1741) The Four Seasons: 'Winter' in f, Op. 8, No. 4, RV 297 Mvt. II Vivaldi returned to Venice in 1725 after spending a few years in Rome. This was a busy year for Vivaldi. He produced four operas, but also his most famous series of violin concerti, The Seasons. Accompanying Vivaldi’s 4 concertos are 4 corresponding sonnets, likely penned by Vivaldi himself. The sonnet for the winter concerto describes biting snow, stinging winds, and accidents on the ice. The music of the winter concerto evokes these wintertime characteristics with chilling musical effects.  The pizzicato in the movement we just listened to for example, evokes the silvery “ping” of icy rain during some more gentle wintery weather. In the final movement however, this gives way to a swirling snow storm, and it’s back to the bow for musical figures that evoke rolling snow drifts and intense cold.

Maurice Ravel (1875-1937) String Quartet in F, Mvmt. II Ravel showed great promise as a concert pianist in his youth, so it was a surprise when he decided to devote himself to composition. His early works were written for piano, however it wasn’t until he wrote his string quartet in F at the age of 27 that he gained public attention. Dedicated to his teacher, Gabriel Fauré, the string quartet was simultaneously popular with the public but also controversial. When Ravel submitted the first movement for a composition prize at the Paris Conservatory, he was expelled from the school for the second time, the jurors thinking the work too modernist. It is likely that Ravel was inspired to write the piece after Debussy had just published his String Quartet in G minor, and indeed Debussy had much praise for his composition, telling him after its premiere, ““In the name of the gods of music, and in mine, do not change a single note of what you have written.”

Leroy Anderson (1908-1975) Plink, Plank, Plunk After graduating from Harvard in 1929, Leroy Anderson stuck around Cambridge, to teach at Radcliffe College and direct the marching band, prior to striking out on his own as a freelance composer. During World War II, Anderson worked as a SPY. After the war, despite having been presented with the opportunity to stay in the intelligence business, he chose to return to composing. With famous pieces such as Clarinet Candy and Trumpeter’s Lulliby, one might think that Anderson favored the wind section, but he also enjoyed writing for string ensembles and using the pizzicato technique. At least two of his works feature pizzicato extensively: Jazz Pizzicato and it’s sequel, which we just heard, Plink Plank Plunk. Funnily enough for such a popular composer, Anderson was not great at predicting the success of his own music. He assumed that Plink Plank Plunk would be a major hit after releasing it on his Blue However, this was overshadowed by Sleigh Ride, which still remains Anderson’s most popular music.

Léo Delibes (1836-1891) Sylvia: Pizzicati These days, Leo Delibes’ opera Lakme tends to be the only work by the composer that is continuously performed, especially the famous “Flower Duet” as a standalone piece. However in his time, Delibes’ operettas and ballets were very popular, especially in Paris, where his works were often staged beside Offenbach’s in the same theatre. Sylvia, Delibes’ ballet adaptation of a 1573 play by Torquato Tasso, may seem like a typical classical ballet with its setting in Greek mythology and its portrayal of the love affairs between nymphs and shepherds. However the music was considered quite revolutionary at its time of composition. The score does not play a subservient role to the action on stage, but is rather treated more symphonically with developed leitmotifs and full instrumental textures. The music of the ballet calls for a larger brass section, and in fact is one of the first known uses of the alto saxophone in classical music. By contrast, certain themes are also performed in a very light and halting manner, such as this Pizzicati from the third act, which is one of the most famous interludes from the ballet.

Gabriel Fauré (1845-1924) Impromptu No. 6, Op. 86 Students of the Paris Conservatory were required to participate in juried exams at the end of every academic year, a practice which continues to this day. Called les concours in French, they generally followed the same format. A piece from the standard repertoire was announced two months before the exam, as well as a commissioned piece by a contemporary composer which students had to prepare in a month. Faurés 6th Impromptu for harp is one such piece, commissioned for les concours in great secrecy. There is somewhat of a scandal concerning this piece, however. It is an open secret that after accepting the commission, Fauré became overwhelmed with other professional obligations and began to realize he would not finish the piece by the deadline. He likely gave what he had started to his close friend Alphonse Hasselmans, one of the founders of French harp technique, who completed the composition. Regardless of who wrote the piece, it’s well known that it was finished so close to the deadline that there was no time to print it, and students had to come to Hasselmans’ Paris apartment and copy the piece by hand in order to be able to prepare it for the exam.

Sylvius Leopold Weiss (1686-1750) Ouverture in B-flat We just heard music for one of the earliest and most popular plucked instruments in Western music, the lute. Even though it is often associated with the Renaissance, the lute was at forefront of classical music in various forms through the 19th century, until it was overtaken by the more versatile guitar. German lutenist and composer Silvius Leopold Weiss spent most of his life working as a court musician. He worked mostly in Dresden, but spent a fair amount of time in Rome as well. He was one of the most prolific composers of his day, writing some 1000 pieces for the lute, most of which were solo sonatas. Weiss was also a technical master on the lute. A contemporary of J. S. Bach, the two technical masters managed to meet once in Dresden, thanks to the help of Bach’s eldest son Wilhelm Friedrich. According to a later account by composer Johann Friedrich Reichardt, when J. S. Bach and Silvius Weiss met, the two entered into a friendly competition to see who was better at improvising counterpoint on their respective instruments.

Vivian Fung (b.1973) Pizzicato for String Quartet Although “Pizzicato” is the 3rd movement of the String Quartet No. 1 by Canadian composer Vivian Fung, it is also performed as a standalone piece, as with this recording by the MCP Quartet. The piece is inspired by elements of Asian folk music, specifically the rhythmic energy of Indonesian gamelan, while the quartet’s pizzicato technique evokes the plucked instrumental music of the Chinese pipa and the Guqin, an ancient seven string zither. As a Chinese-Canadian, Fung often turns to her Chinese roots in crafting a style that has been described by NPR as today’s most eclectic classical music. Much of her music since 2012 is inspired by travels to visit minority groups in China’s Yunnan province.

Toumani Diabate and Bela Fleck Bomako The kora is a traditional African stringed instrument with 21 strings, kind of like a cross between a harp and a lyre with a large gourd resonator. It is a favorite among griots, who were traveling court musicians in north and west Africa charged with keeping the oral history of noble family lines. Playing the kora involves gripping two handguards connected to a bridge and plucking the strings with the forefingers and thumbs. Kora accompaniment to vocal movement often consists of polyrhythmic patterns, and instrumental improvisation in modes. Though not the first to record an album of kora music, Toumani Diabate’s intense participation in the world music scene has put the kora front and center in Malian music. He has had countless successful cross-cultural performances with other musicians, such as this live recording collaboration with Bela Fleck on the banjo, which also shares African roots.