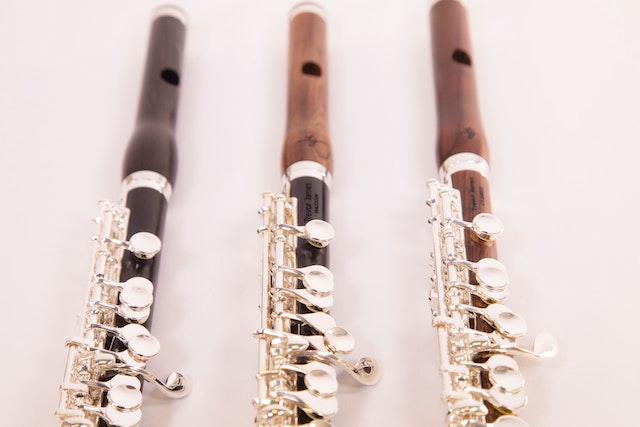 This week, we quizzed on the small but mighty piccolo! Browse our playlist for classical music's only musical gherkin.

Ludwig van Beethoven (1770-1827) Symphony No. 5 in c, Op. 67, Mvmt IV Allegro Beethoven was never one to be bound by convention, not least in this unusual final movement. The famous first movement of the Fifth Symphony is in c minor, a key considered to have special significance to Beethoven because of its “stormy” sound. In the Classical period, the first and last movements of a symphony were usually composed in the same key, providing a sense of cohesion to the overall work. In the Fifth Symphony, Beethoven chose to write the fourth movement in the parallel key of C Major, providing a joyful contrast to the famously doleful “fate motif” in the first movement. Another unusual characteristic provides the answer to our bonus question: this was the first well known symphonic score to include piccolo and trombone. Though these instruments are now included in most works scored for full orchestra, in Beethoven’s time trombone and piccolo were generally relegated to military bands.

John Philip Sousa (1854-1932) The Stars and Stripes Forever Sousa composed this march for band in the key of A-flat Major. Most band instruments, including trumpet, clarinet, and all the members of the saxophone family, are transposing instruments, which means they sound a different note from what is written on the page. This is also true of the D-flat piccolo, for which the famous solo was originally written in G Major, sounding a half step down in A-flat. Unfortunately for modern players of C piccolos, the solo is quite awkward in A-flat. However, orchestral versions of “The Stars and Stripes Forever” are usually in G Major, returning the piccolo part to its original comfortable key. And those funny lyrics about ducks that you may be humming? Well, those are a parody of dubious origin. Sousa himself composed patriotic lyrics for “The Stars and Stripes Forever” extolling the red, white, and blue.

Antonio Vivaldi (1678-1741) Recorder Concerto in C, RV 444 Vivaldi was a remarkably prolific composer, producing nearly 800 works in his lifetime, of which more than 500 were concerti for various instruments. With such an enormous body of work, a cataloging system is necessary to keep it all straight. To that end, the Ryom Verzeichis or RV number system was created by musicologist Peter Ryom in the 1970s . Scholars of historical performance practice still debate what instrument Vivaldi intended this work for- it may have been for flautino (what we would call a recorder), or the flauto traverso (an ancestor of the modern concert flute). Today, this concerto might be performed on recorder, flute or piccolo, and tonight we heard [ sopranino recorder]. There are not a lot of solo pieces out there for piccolo, and this concerto (as well as two others by Vivaldi) has become a cornerstone of the repertoire

Benjamin Britten (1913-1976) The Young Person's Guide to the Orchestra, Op. 34: Fugue: Allegro Molto The stirring conclusion of Britten’s Young Person’s Guide to the Orchestra presents the instruments of the orchestra in score order, beginning with the piccolo. The subtitle gives the answer to our bonus question: “Variations and Fugue on a Theme of Purcell.” Henry Purcell was an English composer of the 17th century whose work fell into obscurity over the centuries. Britten revived interest in Purcell’s music by including it on concert programs and recordings, and by incorporating themes into his own works, such as this educational piece and his Purcell Realizations song cycle. The Young Person’s Guide to the Orchestra presents variations on a melody excerpted from incidental music that Purcell composed for a play called Abdelazer. The playwright, Aphra Behn, was a woman who served as a role model for later generations of female writers.

Peter Ilyich Tchaikovsky (1840-1893) The Nutcracker Act II. Danse Chinois, Danse des Bouffons Tchaikovsky’s Nutcracker score is full of musical references to different dance forms, nationalities, and even foods. Of course, what we just heard is what a nineteenth century Russian guessed Chinese music might sound like. The use of pizzicato in the strings, high woodwinds, and percussion create a sparkling timbre that sort of, maybe, evokes Turkey, which is as far east as Tchaikovsky and his contemporaries were likely to have reached for musical inspiration. It was still seven years before Claude Debussy would hear Balinese gamelan music at the 1889 Paris Exposition, sparking an explosion of Orientalism  -imagined or otherwise- in western classical music.

Merideth Willson (1902-1984) The Music Man: 76 Trombones You’re welcome for that earworm! Let’s see if we can drive it out. Composer and flutist Meredith Willson also wrote the midcentury Christmas classic, “It’s Beginning to Look a Lot Like Christmas.” As a flutist, Willson was a member of John Philip Sousa’s eponymous band from 1921 to 1924. The hit show The Music Man ran on Broadway for three and a half years in its first run. Recently, there was a successful revival starring Hugh Jackman as the huckster Harold Hill and Sutton Foster as Marian the librarian. Hill sees an opportunity to make a buck by promising to start a band in small-town River City, Iowa, but his plans are turned upside down when he falls in love with Marian. The song “Seventy-Six Trombones” is part of a musical diversion meant to forestall questions about Hill’s credentials- musical or otherwise.

Hector Berlioz (1803-1869) La Damnation de Faust: Menuet des Follets (Fool's Damce) The opera The Damnation of Faust is part of a long tradition of German storytelling about Faust, a man who wanted more out of life. His desire for knowledge was so strong that he made a deal with the devil- Faust’s soul in exchange for the desires of his heart. Composers from Busoni to Schnittke have adapted this timeless tale for the operatic stage. Berlioz’s opera, first performed in 1846, elaborates on the legend, casting Faust as a dissatisfied old man who accepts the help of Mephistopheles, a gentleman who is actually the devil in disguise. Along the way, Faust falls in love with the innocent Marguerite. Mephistopheles beguiles her with the “Menuet des Follets,” or Fools’ Minuet, which features two, count ‘em two, piccolos. In 2011, British comedian and former member of Monty Python Terry Gilliam made his directorial debut at the English National Opera with a production of The Damnation of Faust.

Vincent Persichetti (1915-1987) Parable XII for Solo Piccolo, Op. 125 Vincent Persichetti composed 25 parables for a variety of instruments and small ensembles. There are the usual suspects - violin, flute, piano - the surprising choices - piccolo, tuba, carillon - and a few real stumpers. Not to give away our hand, but don’t be surprised if a future edition of Ether Game includes Persichetti’s twentieth parable, The Sibyl: A Parable of Chicken Little. The parable for piccolo that we just heard is typical of Persichetti’s works- including as it does contrasting melodic elements that he referred to as “graceful,” or lyrical, and “gritty,”or percussive and accented. Persichetti taught composition at the Julliard School, where he influenced the careers of composers including Lowell Liebermann, who wrote one of the only other major modern works for solo piccolo, the Concerto for Piccolo and Orchestra.

Paul McCartney (b. 1942) Live and Let Die This song reunited two powerhouses of rock and roll- Paul McCartney and the producer George Martin. They had worked together on multiple Beatles albums, and when Paula and Linda McCartney were asked to write the opening song for the 1973 James Bond film, they brought Martin in to produce and arrange the orchestral backing track. The song was a huge hit, and remains a popular part of Paul McCartney’s touring set. The movie Live and Let Die marked the first appearance of actor Roger Moore as secret agent James Bond. He went on to appear in six more Bond films. The song “Live and Let Die” was nominated for an Academy Award and was later covered by the band Guns n’ Roses