On the Wings of Song: Ether Game Playlist 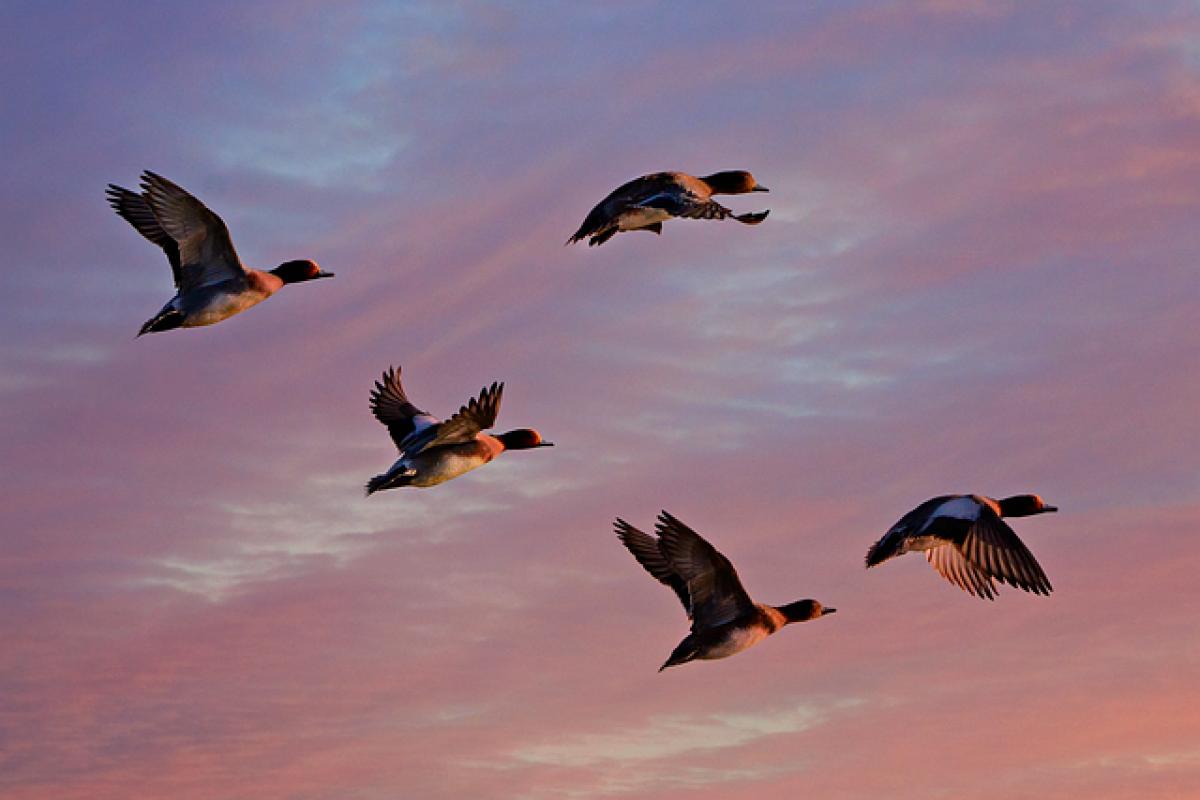 We quizzed on music related to flight with a show called "On the Wings of Song" this week. As you put your seat in the upright position, check your seatbelt and review the flight safety instructions in your front seat pocket, enjoy these nine, soaring selections from our game.

Ralph Vaughan Williams (1872-1958) The Lark Ascending This idyllic work was completed before the outbreak of World War I and Vaughan Williams’ entry into the British Army. Though in his early 40s, the composer served first as a medical orderly, then an artillery officer, and finally a music director. Supposedly, Vaughan Williams sketched The Lark Ascending as he watched British troops crossing the English channel. He would have seen first hand the impact of flight on war time efforts; World War I was the first war to use aircraft seriously. Though Britain was late to the conflict and initially relied on planes built by the French, it became the first country to introduce a dedicated air force, creating the Royal Air Force in 1918. Vaughan Williams originally scored the work for violin piano, but revised it for violin and full orchestra in 1920. It would become one of his most famous works, especially among British audiences.

John Adams (b. 1947) Nixon In China, Landing of the Spirit of '76; "Your flight was smooth, I hope?" Several of John Adams’ operas touch on world events that were quite recent when the operas premiered. In the case of Nixon in China, which was first performed in 1987, the events portrayed took place 15 years before in 1972. The opera tells of the president’s historic visit in a series of vignettes, which portray both the American and Chinese characters with sympathy and historical perspective. The music is minimalist, but contains colorations that effectively characterize the various historical persons in the cast. Unlike the music, the staging of the opera is quite elaborate. The scene we just listened to features a scale replica of Nixon’s presidential airplane. After his inauguration, Nixon was given the opportunity to completely redesigned Air Force One, as it was due for repairs and upgrades. Among other things, Nixon drastically changed the plane’s paint job, and had the phrase “Spirit of ‘76” printed across the nose of the aircraft.

Samuel Barber (1910-1981) Symphony No. 2: I. Allegro ma non troppo In 1942, Samuel Barber was conscripted into the US Army Air Force, where he served until 1945. While in the army he continued to compose and receive commissions including one directly from the Air Force who asked him to write a symphonic work about flyers. This resulted in Barber’s second symphony, completed in 1943. The inspiration for the symphony is very clear. Barber visited the airbase in Fort Worth and spoke to many pilots, later writing “Many pilots talked to me of the sensations of flying, the unrelieved tension, the crescendo of descent rather than mounting, and the discovery of a new dimension... In some way I shall try to express some of their emotions.” After it was recorded, Barber continued to revise the work, even publishing the second movement as its own concert piece titled “Night Flight.”  Twenty years later Barber dismissed his second symphony as propaganda and ordered the original score to be destroyed, however after the composer’s death, a set of parts was miraculously discovered in his publisher’s warehouse and the symphony was reconstructed.

Eric Whitacre (b. 1970) Leonardo Dreams of his Flying Machine Contemporary choral composer Eric Whitacre was inspired to compose this work when he imagined what Leonardo da Vinci might dream about. Da Vinci was more than just a scientist. He was an extraordinary man of many talents, dabbling in art, architecture, botany, music, sculpture, engineering and aviation.Whitacre worked closely with his librettist, Charles Anthony Silvestri, to match the text and the music. The text is made of of storytelling in English and statements in Italian by a voice in da Vinci’s dream, compelling him to find a way to fly. The music combines modern harmonies and vocal effects with elements drawn from the kind of Renaissance polyphony that was composed when da Vinci was alive. The clashing chords and extended techniques help to establish the dream-like world where the master himself would often go to bring his greatest visions to life

John Williams (b.1932) Hook: The Flight to Neverland Hollywood titan composer John Williams originally collaborated with lyricist Leslie Bricusse on what was to become the music for Steven Spielberg’s “Hook”.  The music was originally intended for a 1985 Broadway musical of the same name, but the show never made it to the stage.  Instead, Williams reworked the music as incidental music for the 1990 Hollywood blockbuster based on the Peter Pan legend.  The movie starred Robin Williams  as a grown up Peter Pan who is forced to return to Neverland when his children are kidnapped by his former, and still bitter nemesis, Captain Hook. Julia Roberts plays Tinker Bell, who during this music, whisks a bewildered Peter back to Neverland, where he eventually beholds Hook’s ship The Jolly Roger, on which his children are held captive.

Dello Joio, Norman (1913-2008) Air Power (Symphonic Suite): Frolics of the Early Days: Parade of the Daredevils In 1956, CBS launched an extensive television series on the history of airpower. To provide the score, they commissioned Norman Dello Joio, who was a Pulitzer prize winning composer and student of Paul Hindemith. The series covers the use of aviation for military power and details the stories of many important figures in aviation, from the early history of flight to the mid-20th century and ends with a feature on rockets.  Dello Joio later arranged extracts from the film score into a symphonic suite, which follows the historic scope of the docuseries. The suite is exemplary of Dello Joio’s neo-romantic style combining historic inspirations with progressive jazz-influenced harmony, and was originally recorded and released on LP by the Philadelphia Orchestra in 1958.

Aaron Jay Kernis (b.1960) String Quartet No. 1, 'Musica Celestis' Aaron Jay Kernis is perhaps more well known for his wry musical humor and eclectic composition style, however his first string quartet follows the traditional four-movement structure of a classical-era chamber piece. This was a departure from Kernis’ previous work, as he generally prefers to compose intuitively in a more free-form manner. The second movement in particular gives this quartet its nick-name “musica celestis” by taking inspiration from the medieval poetic concept of imitating the music of choirs of angels singing praises without end. Kernis did not consider himself a religious composer, however he thought this was a potent musical image and had been studying the work of Hildegard von Bingen at the time this quartet was commissioned. This recording is performed by the Lark Quartet, for whom the piece was originally written.

William Bolcom (b. 1938) Inventing Flight: I. Daedalus and Icarus Like Marc Blitzstein’s Airborne Symphony, William Bolcom’s 2002 work Inventing Flight similarly tracks humankind’s quest for flight from ancient mythology to modern aviation. This first movement, Daedalus and Icarus, is a depiction of the Greek myth that warns of the folly of the selfish pursuit of the heavens. In the story, the craftsman Daedalus and his song Icarus attempt to escape prison using wings crafted from feathers and wax. Icarus does not follow the advice of his father and flies too close to the sun, melting the wax and causing him to plunge to his death. The final movement of Bolcom’s work is much more triumphant, describing Orville and Wilbur Wright’s successful achievement of the centuries-long quest for flight. The work was commissioned by the Dayton Philharmonic Orchestra in celebration of the centennial of the Wright Brothers’ first flight. Dayton, Ohio was the Wright Brothers’ home town.

Wayne Carson (1943-2015) The Letter Though an early version of the Box Tops had been performing around Memphis under the name “The DeVilles,” it wasn’t until they acquired a new lead singer and were brought into the studio by producer Dan Penn to record this short pop song that they achieved international success. Alex Chilton, who was only sixteen at the time, sang in a deep husky voice that tricked many listeners into thinking the lead singer of the Box Tops was an old blues musician from the deep south. Clocking in at just under 2 minutes, The Letter is one of the shortest songs to reach Billboard’s Top 100, where it charted at #1 for four weeks in 1967. The Box Tops had a few more hits before disbanding in 1970. Chilton would later establish the rock band Big Star in 1971 which, while not achieving mainstream success, has inspired generations of indie and alternative rock bands.