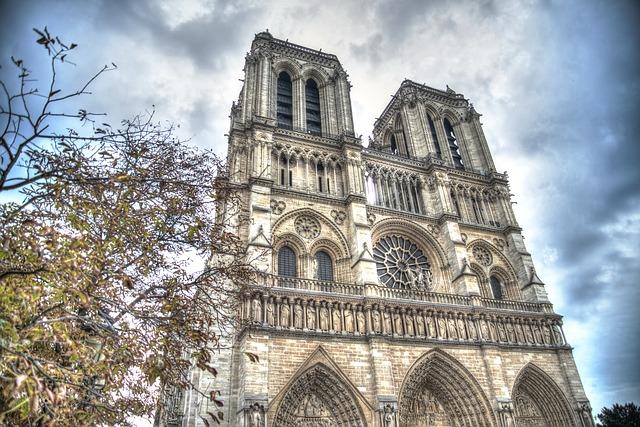 Browse our playlist of nine works inspired by the poems, plays and novels of Victor Hugo, from the Hunchback of Notre Dame to the Dance of the Hours.

Giuseppe Verdi (1813-1901) Rigoletto: 'La donna è mobile' The jester, although a lowly figure in the court, was given unusual license to speak freely about the folly of nobility—that’s his job after all. Sure, playing the fool is all fun and games, that is, until a curse is involved! The jester learns this the hard way in one of Verdi’s most popular operas, Rigoletto. In writing the opera, Verdi and his librettist Francesco Maria Piave took inspiration from Victor Hugo’s play, The King’s Amusement. In this opening scene, the Duke of Mantua brags about his many female conquests and his jester, Rigoletto, joins in jeering at the husbands of any woman that the Duke may pursue. This was a step too far for the old Count Monterone, who places a curse on both the Duke and Rigoletto. And for our hunchbacked fool, let’s just say things don’t end well...

Amilchare Ponchielli (1834-1886) La Gioconda: The Dance of the Hours  In the 1870’s La Gioconda was the most successful opera in Italy until it was supplanted by Verdi’s Otello.  The title La Gioconda means “happy woman,” but in English the opera is called The Ballad Singer. The opera is propelled by a brilliant libretto by Arrigo Boito, based on Angelo, Tyrant of Padua, a 1835 play in prose by Victor Hugo. This excerpt, “The Dance of the Hours” is a short ballet within the opera and became one of the most famous dance pieces from any opera. In fact it’s the dance in the 1940 Disney film Fantasia with the ostriches, alligators and hippos in tutus. Fun fact- those ostriches are of the male sex.The black and white plumage indicates this, despite the tutus. Female ostriches are mostly brown,  not nearly as fun to animate! All jesting aside, that sequence has nothing to do with the original opera.

Claude-Michel Schönberg (b. 1944) Les Misérables: Finale Although best known for his literary works, Victor Hugo was a highly outspoken author and politician during the highly turbulent years of 19th Century France.  His opposition to Louis-Napoléon Bonaparte's coup d'état caused him to remain in exile for 19 years and his support of liberty and social democracy provided the foundation for much of his written work.  When he wasn’t working to support governmental upheaval, Hugo spent his time listening to and studying music.  An admirer of Beethoven and Schubert, Hugo had close relationships with both Berlioz and Franz Liszt, with whom he also studied piano.

Gaetano Donizetti (1797-1848) Lucrezia Borgia: Il segreto When Hugo’s dramatic play Lucrèce Borgia, which is loosely based on the legend of a real-life murderous Renaissance noblewomen, had its premier in Paris in 1883, it was extremely popular, and its potential for an operatic adaptation was obvious. That same year, Felice Romani, who was the leading librettist in Italy, wrote the script for Lucrezia Borgia and sent it to Donizetti, with whom he would write eight operas. Wanting to ride the wave of the play’s popularity, the opera’s first run was incredibly rushed, being staged only a month after Romani finished the libretto. The performers were considered sub-par, and even Donizetti’s score wasn’t up to its usual standard. Subsequent revisions and performances were much more successful, though the shocking violence in the story, where Lucrezia’s scheming ends in the death of herself and almost half of the cast, was always considered controversial.

César Franck (1822-1890) Les Djinns Victor Hugo published one of his most famous poems in 1829, in a small collection titled Les Orientales. “Les Djinns” epitomized Romantic-era poetry, was highly evocative and expressed intense emotion. Westerners might think of djinns as equivalent to genies, though in their Arab fairy-tale origins they are actually little winged demons who arrive in a terrible swarm. Hugo’s groundbreaking poem used literary techniques which wouldn’t become conventional until the advent of modern poetry, such as using the form of the poem itself to represent the subject. The first stanzas of “Les Djinns” are terse, becoming progressively longer until a frightful climax before dying away to short lines again, thus mimicking the arrival and departure of a swarm of djinns. Numerous composers were inspired by this poem, including Franck, who used it as the source for his symphonic poem for piano and orchestra.

Èdouard Lalo (1823-1892) Guitare, Op. 28 After German composers like Schubert, Schumann and Brahms mastered the salon song known as “lied” in the early Romantic period, where they set the work of German Romantic poets like Goethe to music, the French soon followed with their own equivalent. Known as “melodie,” or sometimes “romance,” Faure and Debussy popularized the genre, turning poems by Hugo, Baudelaire and  Verlaine into short lyrical pieces for voice and piano. Lesser-known composers such as Duparc and Lalo also earned a degree of popularity through writing mélodie. In Lalo’s setting of Victor Hugo’s poem “Guitare”, the composer channels his Spanish heritage to give the piano a strumming effect, offsetting the lyrical vocal line.

Guillaume de Machaut (c. 1300–1377) Messe de Nostre Dame There is no direct connection between Machaut and Hugo. Their careers are separated by a span of about 500 years, though Hugo was a fan of early music, specifically Palestrina and Monteverdi. Rather, Machaut and Hugo are connected by the edifice of Paris’ most magnificent cathedral. Notre Dame. Machaut’s Mass has been interpreted as an early programmatic work; the music alternates between periods of sustained notes and spidery, interlocking melodies, believed to musically depict the beautiful stained glass windows of Notre Dame Cathedral. Hugo’s hugely popular novel, The Hunchback of Notre Dame, was written to preserve the values of French culture that Notre Dame represented, especially High Gothic architecture that was being destroyed during the french political upheavals of the 19th century. Hugo’s novel not only restored Notre Dame as a national icon, it sparked a renewal in gothic architecture, and the preservation of many ancient structures that might have been torn down.

Benjamin Godard (1849-1895) Contemplation Born in Paris in 1849, Benjamin Godard was a child prodigy, trained in violin. After gaining a standard musical education at the Paris Conservatory, he established himself as a composer of early romantic music in Germany, Spain and France. While he wrote in most genres, his reputation was built on the charm of his salon pieces, music for solo piano and vocal settings of contemporary poems, some of which he himself wrote. The style of Godard’s compositions tend towards a more conservative use of harmony influenced by Beethoven instead of Wagner, whose opinions he despised. As salon music became more commercialized, Godard leaned into popular trends for sentimental music full of gentle melancholy, and some critics accused the composer for “selling out.” However it is likely that his fall into obscurity after the 19th century was due to his early death of consumption rather than a superficial emphasis on charming melody. He at least can be credited for developing the “symphonie legendaire,” an unusual genre which is built like a song cycle with orchestral interludes.

Spike Jones (r. 1949) The Dance of the Hours Spike Jones got his start as a studio drummer in Hollywood—he even played on the first recording of Bing Crosby’s “White Christmas”! Stifled by his inability to use car horns, sirens, and slide whistles, Jones formed his own group, the City Slickers, with a focus on satirical records. When he first started out, clubs didn’t want to take a chance on a relatively unknown percussionist clanging away on his cowbell, so the group chose vocalist Carl Donald Grayson, already an established musical act, as their frontman. A few years later, Grayson was dismissed from the band when his alcoholism made him hard to work with. By that point, the band was popular enough for Jones to fully assume the frontman role. The band continued to feature comedic performers however, including seasoned radio comedian Doodles Weaver to perform the race announcer for this spoof of Dance of the Hours. Weaver toured with Jones for four years as a musician and comedian, until 1951.