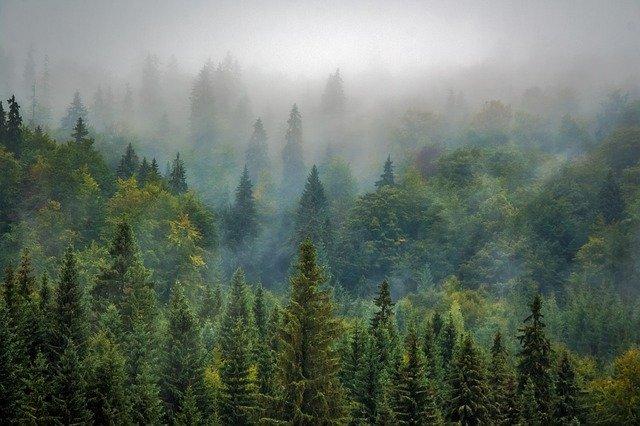 The Brain Trust wondered this week if they’d ever see a song so lovely as a tree. Browse our playlist from Fruits of the Forest, a classical music playlist featureing some arboreal acquaintances.

Peter Ilyich Tchaikovsky (1840-1893) Nutcracker, Op. 71: Act I: Decorating the Christmas Tree No one’s winter would be complete without taking in one of the many productions of The Nutcracker Ballet offered annually across the world. It is a perfect ballet for families for its story and also for its music. The score features playful instruments such as toy instruments and the celesta—a fairly new instrument in 1892. The ballet opens after the overture with the decorating of a great Christmas tree by the parents of the young heroine, Clara, who goes on to meet the titular Nutcracker and travel with him to the land of the sugar plum fairy. Tchaikovsky was initially displeased with the story, because he felt that it lacked real drama. Despite his displeasure, it has gone on to be one of his most beloved works.

Traditional Christmas The Holly and the Ivy Pine trees are not the only kind of Christmas tree. As sung in the second line of this popular Christmas carol, both holly and ivy are evergreens that are “full grown” in the winter when most other plants have lost their leaves. The carol, which extols the beauty of the holly as a symbol of Christianity at Christmas, has no definitive author. It was first published in England sometime in the early 19th century as a broadside. Broadsides were single sheets of paper typically with some kind of ballad, poem, or even news story printed on one side. Broadside ballads became increasingly popular after the invention of the printing press and were especially cheap to produce. Many traditional folksongs, especially in England, were printed as broadside ballads, turning these inexpensive prints into one of the best written documents of a largely oral tradition.

Ottorino Respighi (1879-1936) Pini di Roma [Pines of Rome] Respighi was the first Italian composer of the early 20th century to make a name for himself by composing purely orchestral music instead of the traditional route of writing operas. He’s best known for the three Rome-inspired tone poems: The Fountains of Rome from 1917, The Pines of Rome from 1924, and Roman Festivals from 1929. Fountains was a smashing success, but the premiere of Pines didn’t go quite as well. Audiences found some of the atonal elements of the composition off-putting. As tastes changed however, The Pines of Rome became Respighi’s most popular work. The piece is unified by the image of a pine tree, and each movement highlights famous pine groves throughout Respighi’s home city of Rome. In the first and second movements, the listener is guided from the pine trees in the gardens at the Villa Borghese to those shading the entrance of a catacombe in the Campagna, an area of country-side surrounding Rome that was peppered with scenic pine trees.

Arnold Bax (1883-1953) The Tale the Pine-trees Knew The pine tree forests of Northern Europe, particularly in Scotland, Norway, and Sweden, are ancient. There is a yew tree in Scotland that is likely over 2000 years old and a spruce tree in Sweden that is over 9000 years old! Arnold Bax must have had this longevity in mind when he wrote his 1931 tone poem The Tale the Pine-Trees Knew. He was partly inspired by ancient myths of the Norse and the Highland Celts, stories that were written while these ancient trees still stood (presumably listening and learning). Mythology and trees seem to be a theme with Bax’s work, especially in his tone poems. The myths of Ireland and Scotland play a role in his tone poems Tintagel, In The Faery Hills, and The Garden of Fand. And trees are central to his 1917 tone poem November Woods and his 1922 tone poem The Happy Forest.

Scott Joplin (1868-1917) Treemonisha: Act I. No. 4 We're Going Around Famed ragtime composer Scott Joplin’s opera Treemonisha was composed in 1911, but was not officially staged until 1972. Joplin was awarded the Pulitzer Prize posthumously following the success of this work. Often mislabeled as a “ragtime opera” Treemonisha was actually influenced by Wagner and was originally intended by Joplin’s to get white listeners to appreciate music composed by African Americans as serious classical music. The opera takes place on an abandoned plantation in rural Arkansas where former slaves Ned and Monisha raise their daughter, Treemonisha. So named because she was found by Monisha under a sacred tree, Treemonisha has been brought up to be educated, unlike the other cornhuskers on the plantation. Joplin stresses the importance of education throughout the work and how it will be the answer to the plight of African Americans. Joplin’s original orchestration notes have been lost, but numerous arrangements have been made from the surviving piano score.

Louis Moreau Gottschalk (1829-1869) Le Bananier, Op. 5 Louis Moreau Gottschalk is known to us today as a 19th-century American composer, but he was also well-known as a brilliant touring pianist. He frequently performed his own compositions which became popular for their infusion of folk elements, especially the syncopated rhythms of his Caribbean and Creole ancestors, Gottschalk was born in New Orleans, Louisiana, and though he was composing and touring about half a century before his home city would become the jazz capital of the world, his use of Caribbean rhythms, popular songs and folk music in his compositions would set the foundation for the same kind of musical borrowing that was used by the first jazz musicians of the early 20th century. His creole fantasy “The Banana Tree” is based on a popular march from Louisiana called En Avant Grenadie.

Toru Takemitsu (1930-1996) Rain Tree  Japanese composer Toru Takemitsu likened his music to a garden, where he played the role of gardener. He once said, quote, “Listening to my music can be compared to walking through a garden and experiencing the changes in light, pattern, and texture.” A performance of the percussion piece Rain Tree, from 1981, evokes this same imagery: the crotales imitate raindrops, the marimbas and vibraphone improvise melodies that are meant to resemble those raindrops falling from leaves, and the whole thing is accompanied by specific lighting cues given by the composer. The title “Rain Tree” comes from an observation made in a novel by author Kenzaburo Oe, where he describes a Hawaiian tree that soaks up water from overnight showers in its leaves, and then distributes raindrops throughout the day. This idea inspired Takemitsu so much that he later composed two piano sketches based on the “Rain Tree” as well.

John Ireland (1879-1962) The Almond Tree The Englishman John Ireland was born in Cheshire in 1879. His mother, 30 years younger than his father, died when the young John was 14, and his father passed away the following year. Throughout his life, Ireland would continue to carry the scars of a lonely, unhappy childhood. He entered the Royal College of Music in 1893, where he initially studied piano and organ. He began composition lessons in 1897, studying with Charles Villiers Stanford. Ireland spent most of his adult life employed as a church organist. From 1904 to 1926, he served St. Luke’s, Chelsea, a post which allowed him ample opportunity to also pursue his compositional activities. By 1910, he began to make a name for himself as a composer of art songs, and piano pieces, such as this short work called The Almond Tree which was prized for its Debussy-like quality.

Joan Baez (b. 1941) The Trees They Do Grow Tall Folk-singer and civil rights activist Joan Baez really needs no introduction. A central figure in the folk music revival during the early 1960’s, her debut record consisted mostly of traditional American folk songs. Many of these songs have much earlier European equivalents. A version of “Trees They do Grow High” appeared in a Scottish manuscript from the 1770’s and likely has medieval origins, surviving through oral tradition. It was a favorite among publishers, who sold and distributed the lyrics to ballads and traditional songs by printing them on large sheets of cheap paper called broadsides with woodcut illustrations. Broadsides were commonplace from the 16th to the 19th century, and became so popular that the “broadside ballad” has become a genre in its own right.