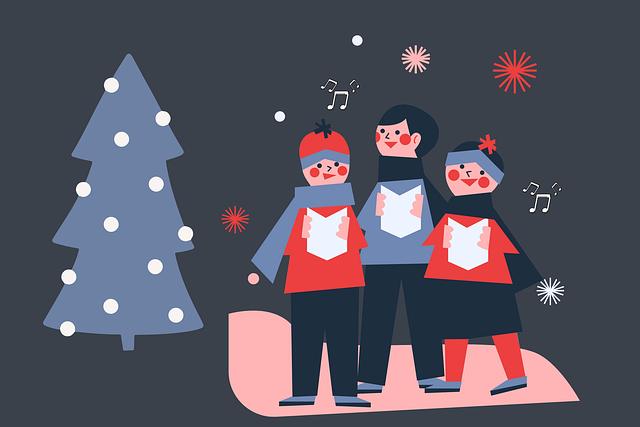 With Christmas only days away. Ether Game celebrated the season with a show of Christmas carol inspired music. Enjoy our playlist from "Festival of Carols" and add some of these to your own holiday soundtrack!

Felix Mendelssohn (1809–1847) Hark! The Herald Angels Sing “Hark! the Herald Angels Sing” was not written as much as it was assembled from two different works composed more than a hundred years apart. The prolific hymn writer Charles Wesley wrote the text around 1739. In 1840, Felix Mendelssohn composed an occasional work for the annual Gutenberg Festival, which honored the work of the great printing pioneer. This little-known secular choral work does not figure large in Mendelssohn’s output, and would have been all but forgotten were it not for another musician, William Cummings. Cummings, a singer, organist, teacher, and musical bibliophile and collector, was a great admirer of Mendelssohn, having sung in the English premiere of Elijah at the age of sixteen. Later in his career, Cummings paired an updated version of Wesley’s text with Mendelssohn’s work to create the now-familiar carol.

Gustav Holst (1874–1934) In The Bleak Midwinter The carol “In the Bleak Midwinter” began as a poem by English poet Christina Rossetti. Following the end of a love affair, she wrote it in 1872 in a response to a callout in the magazine Scribner’s Monthly looking for a new Christmas poem. The touching tale was published posthumously in 1904, and was set to music very shortly after in 1906 by Gustav Holst. Holst composed an exquisitely lovely hymn tune to add to the lyrics, a hymn he called “Cranham,” named after the English town where he wrote the tune. But Holst’s is not the only surviving version of this tune. English composer Harold Darke, composed a similarly lovely version for choir and organ in 1909 when he was a student at the Royal College of Music. Darke’s version is sung by the choir of King’s College in Cambridge each year during their Christmas service.

Benjamin Britten (1913–1976) A Ceremony of Carols, Op. 28: Procession; Wolcum Yole! There is no rose After three very successful years in America, Benjamin Britten and Peter Pears boarded a Swedish cargo vessel, the Axel Johnson, on March 16t, 1942 for their return to Britain. It was a long and boring journey that took nearly a month. U-boat activity was at its height so it was probably rather frightening too. While on the boat, Britten took the time to begin writing his “A Hymn to St. Cecilia” as well as the Ceremony of Carols. The Ceremony of Carols is a unique piece for a choir of boy treble voices and harp that features Old English poems and carol texts dating as far back as the 15th and 16th centuries. The work as a whole, which is about 20 minutes, is full of musical variety, including quotes from medieval plainchant, Britten’s characteristic 20th-century style, and even references to African American spirituals.

Frédéric Chopin (1810–1849) Scherzo No. 1 in B minor, Op. 20 Frédéric Chopin is widely regarded as one of the greatest pianists that ever lived. His virtuosic compositions clearly show that he was a prodigiously gifted musician and an amazing performer. Around the time that Chopin composed his infamously difficult “Winter Wind” Etude, he also decided to set the popular Polish Christmas carol Lulajże Jezuniu or Lullaby to Baby Jesus, as the theme for a solo piano piece. Chopin identified the piece as a scherzo, and though that term usually indicates a playful composition, little about this scherzo seems lighthearted. Even the Christmas carol in the middle is set to dark chords, and often the piece seems on the verge of complete chaos. Chopin completed the work in 1831 while in Vienna. In Poland that same year, the Polish-Russian War was in full swing. It’s likely that rather than celebrating Christmas, Chopin was using this scherzo to express his emotional turmoil towards the violence in his homeland.

Franz Liszt (1811–1886) Weihnachtsbaum: Book I: Adeste Fideles: March of the Three Holy Kings Many of Franz Liszt’s compositions are difficult, dramatic, dark and intellectual—everything that his Weihnachtsbaum or “Christmas Tree Suite” is not. For this reason, it’s often overlooked and remains one of Liszt’s more unusual pieces. Liszt dedicated the work to his grandaughter Daniela who was born on Christmas Eve. Liszt performed the piece on her 21st birthday in 1881, and the concert was held in Daniela’s hotel room in Rome where she was accompanying her grandfather on a recital tour. Most of the movements of  Weihnachtsbaum are based on Christmas carols, though the final three movements are musical memories of Liszt’s relationship with the Polish noblewoman Carolyne Wittgenstein. Although Liszt revised several versions of the collection, including an arrangement for piano four-hands and another for harmonium, the collection was not published for almost ten years after it was written.

Leroy Anderson (1908–1975) Suite of Carols for Brass Choir Composer Leroy Anderson is considered to be the master of American light orchestral music. For years, he worked with the Boston Pops Orchestra and conductor Arthur Fiedler, who premiered his tuneful orchestral works like “The Syncopated Clock,” “The Typewriter,” and “A Trumpeter’s Lullaby.” His most enduring orchestral piece is most likely Sleigh Ride, a favorite of the Christmas season with its iconic horse whinny and whip crack. Lyricist Mitchell Parish later added lyrics to the tune that talk of sleigh bells jingling and ring-ting tingling too. Anderson was clearly a keen orchestrator, and he often took his orchestration skills to other works. He created three instrumental suites of Christmas Carols, one for string orchestra, one for woodwind ensemble, and one for brass choir, which we just heard. You may have even recognized some of these carols: we heard “While by my sheep,” “In dulci jubilo” (better known as “Good Christian Men Rejoice”) and “Lo, how a rose e'er blooming.”

Václav Nelhybel (1919-1996) Estampie Natalis Czech composer Vaclav Nelhybel held positions conducting radio orchestras in both Prague and Switzerland before emigrating to the US in 1957. There he focused on teaching composition and music theory, becoming a professor at several universities around the east coast. The University of Scranton currently houses his manuscripts, which were written mostly for student ensembles. Nelhybel’s distinctive style is based on early music systems and Czech folksong, which take a more linear modal approach to harmony. We can hear this in his Christmas estampie, where independent melodic lines are freely intertwined to create a whirlwind effect of intensifying energy. The estampie is one of the oldest dance forms in western music, likely originating in stomp dancing from southern France.

Richard Rodgers and Lorenz Hart Little Girl Blue The Rodgers and Hart song “Little Girl Blue,” written for the wild circus-themed musical Jumbo from 1935, is already a complicated song. It has one of the loveliest bridges in American popular song, where Hart rhymes “surrender” and “slender” with “send a tender.” And Rodgers even inserted a waltzing trio section into the song, which sadly is omitted by Nina Simone. Instead, Simone adds her own bit of mysterious complication by combining the Richard Rodgers melody with a completely different melody: the Christmas carol “Good King Wenceslas.” Her treatment of “Good King Wenceslas” is fugue-like, giving the song an almost Baroque quality. This technique of combining two melodies in counterpoint is often referred to as  quodlibet. Although precisely why Simone chose to create a quodlibet with a Christmas carol is anyone’s guess.