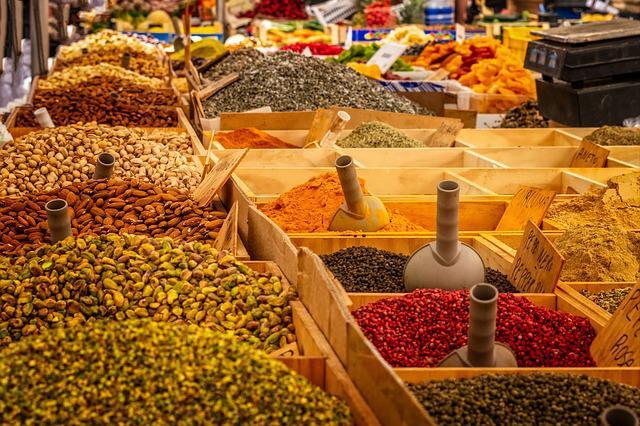 It's National Farmer's Market Week! Ether Game celebrates with a show about farmers, produce and commerce, and provides you with a soundtrack for your Saturday morning perusing below.

Modeste Mussorgsky (1839-1881) Pictures at an Exhibition (orch. Henry Wood): Markets at Limoge and Catacombs Pictures at an Exhibition is based on artwork by Mussorgsky’s late friend, Viktor Hartmann. Hartmann, who was an artist, architect, and stage designer, died at an early age of an aneurism. Shortly after his death, an exhibition of over 400 of his works was organized. After only one-and-a-half months of composing, Mussorgsky had finished his tribute to Hartmann. The piece was originally scored for solo piano, however several composers have arranged it for orchestra, including English composer and Proms conductor Henry Wood, who premiered his version in 1915. Beginning with a promenade, the listener is guided through both real and imaginary scenes. The movement we just heard depicts a market in the central French city of Limoges with its quarrelsome buyers and sellers gossiping and hawking their wares.

Robert Schumann (1810-1856) Album for the Young, Op. 68, Happy Farmer, Harvest Song, The Reaper's Song These pieces come from Schumann’s piano work Album for the Young, a set of 43 pieces mostly intended to be played by young performers. Schumann wrote this work for his three young daughters—in fact, Schumann composed a number of works with children in mind, whether it be music meant to be performed by children, or simple piano sketches on themes from childhood. Since the Album of for the Young was expected to be published around Christmas, the German painter Ludwig Richter was commissioned to create a highly decorative cover for the work. Being well known for his fairy tale illustrations, Richter’s cover design features extravagant foliage and children enjoying music in a pastoral setting. The collection may seem quaint in comparison to much of Schumann’s piano music, but we know from his letters that The Album for the Young was especially dear to him, and in his own words made him feel “as if he was beginning to compose again at the very beginning.”

Aaron Copland (1900-1990) Music for Movies: Threshing Machines Composer Aaron Copland wrote music for a number of films, beginning in 1939 with The City.  This documentary film was shown at the 1939 New York World’s Fair, presenting the ideal city of the not-too-distant future.  Other film scores included Our Town, a film version of Thornton Wilder’s famous play, and The Red Pony, based on Steinbeck’s novel.  Copland also wrote music for North Star, a 1943 wartime film portraying Russian heroism in the face of Nazi attacks.  This film, along with Copland’s known leftist sympathies, landed the composer on the witness stand during the McCarthy hearings of the 1950s.  Copland’s last film score was to the tense 1961 psychodrama titled Something Wild.  In 1942 Copland arranged a suite entitled Music for Movies, containing music from The City, Our Town, and Of Mice and Mine. The excerpts we have just heard, depictions of harvesting, are both from Of Mice and Men.

Percy Grainger (1882-1961) Country Gardens Grainger’s arrangement of Country Gardens follows two very typical traits of the composer’s work. First, that it is sourced from a folk song, and second, that Grainger wrote multiple versions for different instruments and ensembles. For this piece alone there are versions for solo piano, piano duet, wind band and symphonic orchestra. The working draft indicates that Grainger originally intended to write Country Gardens for “ two whistlers and a few instruments.” Some purposefully placed wrong notes in the arrangement also demonstrates Grainger’s sardonic and ironical humor. He quotes “The typical English country garden is not often used to grow flowers in, it is more likely to be a vegetable plot. So you can think of turnips as I play it.”

Leonard Bernstein (1918-1990) Candide: Make Our Garden Grow “Make Our Garden Grow” is the surprisingly sincere finale to the otherwise satirical operetta Candide, by Leonard Bernstein. After many trials and tribulations, our hero Candide returns home and resolves to make a good, simple life for himself and the people he loves, centered around … gardening (both literally and metaphorically). This finale was in the original conception of the operetta, but other parts went through numerous changes. It was author Lillian Hellman who conceived of making Voltaire’s novel Candide into a play, and it was Bernstein who convinced her to make it an operetta. He wasn’t too happy with Hellman’s result, so several other authors, including John La Touche, Dorothy Parker, Richard Wilbur, Stephen Sondheim, and even Bernstein himself, made changes to the libretto over the years.

Clement Janequin (1485-1558) Voulez ouyr les cris de Paris One of the great French composers of the first half of the sixteenth century, Janequin first appears as a clerk in the employ of various bishops. By the late 1520s, his reputation as a composer had also spread.  Several collections of his chansons were published by the influential early publisher Pierre Attaingnant (ann: ah-taa-nyahn). The vocal works of Janequin that are most popular today are “Cries of Paris,” “Bird Songs” and “The Battle,” all songs in which the music cleverly imitates non-musical sounds, such as mounted cavalry, the idle chatter of gossipers, and with tonight’s selection, the calls of street vendors.

William Alwyn (1905-1985) Pastoral Fantasia The Pastoral Fantasia for viola with orchestra was completed in October of 1939. Its first performance was an arrangement for viola and piano featuring Watson Forbes and Clifford Curzon, who were both close friends of Alwyn. The composer was not afraid to experiment with unusual harmonizations and modern techniques, however he valued aesthetic beauty and positivity of expression above all, and thought composition should be deeply rooted in the emotions. The Pastoral Fantasia is practically a spiritual successor to Vaughan Williams’ The Lark Ascending, a nostalgic rhapsody exalting the English countryside and the slower paces of country life. Yet there is also a hint of sadness, as if with this work’s proximity to the beginning of World War II, Alwyn knew this way of life could be lost forever.

Alexander Agricola (c.1446-1506) Je nay dueil Not much is known of Renaissance composer Alexander Agricola’s life, but based on his last name, the latin word from which we derive “Agriculture,” he must have had some farmers in his lineage. We know he was born in Ghent, now in modern day Belgium, but spent most of his life bouncing from court to court, earning a reputation as one of the finest singers in 15th-century Europe, “the divine Alexander,” according to one source. He sang and composed in Milan, Florence, Naples, and France, before dying of the plague in Spain. Agricola’s approach to harmony was unorthodox, treating dissonances in an unconventional manner, at least for the time period. Several of his masses survive to this day, including the Missa Re-Fa-Mi-Re-Fa and his secular chansons.

Farmer, Art (1928–1999) Farmers Market Art Farmer came of age as a trumpeter in the bebop era, performing with other jazz greats as Lionel Hampton, Horace Silver, Gerry Mulligan, and Benny Golson. Farmer’s style morphed throughout his career, but he’s known today primarily for two things: his popularization of the flugelhorn in jazz, a mellower variant of the trumpet; and his 1952 breakout hit “Farmer’s Market,” a play on his last name. “Farmer’s Market” became popular among a certain group of vocal jazz hipsters and bopsters in the 1950s when singer Annie Ross  wrote lyrics to the tune. This technique is known as vocalese, the art of adding lyrics to pre-existing instrumental jazz solos, and was the practice of singers Eddie Jefferson, Jon Hendricks, and Mark Murphy. The vocalese version of “Farmer’s Market” was later recorded by Annie Ross’s vocal jazz group Lambert, Hendricks, and Ross.