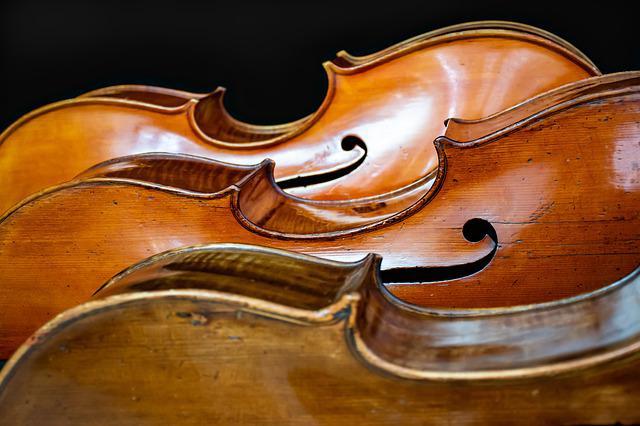 This week, it was a family thing as we quizzed on music for different instrument families. Browse our collection of string quartets, flute choirs, trumpet trios and viol consorts.

Antonín Dvorák (1841-1904) Slavonic Dance, Op. 46, No. 4 in F (piano version) Many people know the Slavonic Dances as a rousing orchestral piece, full of tuneful melodies and energetic percussion, but Dvorak's original version of the work is much more modest: a piano duet. He probably modeled them after the Hungarian Dances, a piano duet by Johannes Brahms. Brahms actually played an important role in Dvorak’s life. They met when Dvorak was applying for a scholarship from an Austrian imperial committee, where Brahms was a member. Brahms was impressed by the young Czech’s music and recommended him not only for the scholarship, but also to his publisher Fritz Simrock. It was Simrock who eventually commissioned Dvorak’s first set of “Slavonic Dances” for piano 4-hands. These works were very successful, and Dvorak quickly orchestrated them. They were soon performed all throughout Europe, establishing Dvorak as the most important Czech composer of the day.

Benjamin Britten (1913-1976) Fanfare for St. Edmundsbury There is a tradition among British composers of favoring brass and wind instruments. British conductor Henry Wood’s orchestration of Mussorgsky’s Pictures at an Exhibition for example, gives many dramatic and melodious moments to the winds and low brass of the symphony orchestra, whereas Ravel’s more popular orchestration generally favors the strings. Benjamin Britten, who did much to expand the sound and influence of British musical composition in the mid-twentieth century continued this tradition, with his Fanfare for trumpets, The piece is dedicated to St. Edmundsbury, a cathedral in the town of St. Edmunds in Suffolk, England. Although a church has existed on the site since the 11th century, it did not become a cathedral until 1914, with substantial redesign work done in 1959, the year that Britten completed his fanfare.

Steve Reich (b.1936) Mallet Quartet I. Fast New York composer Steve Reich leaned into his roots as a percussionist to write his Mallet Quartet, which is scored for two marimbas and two vibraphones. The work has the hallmarks of Reich’s style; an emphasis on rhythm and repetition which creates a constant pulse over which complex interlocking cycles of motifs are played. Performing this piece is a test of endurance, the players have few pauses once the performance has started, and as the separate parts become more closely intertwined, the continuous rhythm creates a unifying effect as the sound of the marimbas and vibraphones seem to melt together into one meta-instrument.

Gabriel Fauré (1845-1924) String Quartet in e, Op. 121: 1. Allegro moderato Faure’s only string quartet was his final work, completed less than two months before his death at 78. At that time, writing a string quartet that did not include a supporting piano part was still considered daunting, the likes of Beethoven and Haydn achieved the most success in the genre. Faure drew on themes and material from an early unpublished violin concerto for his quartet, and kept the composition secret until he had completed the second movement, which was actually written first. Though the themes are organized in a fairly conventional sonata form, the asymmetrical melodies and modal harmonies obscure this, and following the development of the music requires a more intimate focus than might be needed for a similar composition by Debussy or Ravel.

William Byrd (1543-1623) In Nomine in 5 Parts, No. 1 and 2 In the religious turmoil of Elizabethan England, William Byrd managed to keep his head on his shoulders and stay out of jail. Byrd was a recusant catholic in a state which, following decades of bitter political struggle with the Roman church, had officially outlawed the religion. The music by him that we just listened to was a popular type of piece for the English viol consort: the In Nomine. A consort is an early music term that refers to an ensemble of instruments of the same family. Two of the most popular types in the 17th century were recorder consorts and viol consorts, They consisted of  between four and eight musicians each playing an instrument dedicated to a different voice part, starting with the bass viol on the low octave, and progressing to the small treble viol on the highest voice. Recorder consorts have instruments for an even bigger range, with a contrabass recorder at the bottom, an instrument that can be six feet long, and the pocket-sized sopranino recorder for extra-high melodies.

Amy Beach (1867-1944) Quartet for Strings in One Movement, Op. 89 Amy Cheney was a child prodigy by any standard. She mentally composed her first piano pieces at age four, later sitting at the piano and playing them fully-formed. She was 16 years old when she made her debut in Boston, but the late 19th century was a much different time. Amy Cheney might have made a career as a concert pianist had it not been for her marriage to Boston physician Henry Harris Aubrey Beach in 1885. At the time, a married woman just couldn’t travel alone. However, Mrs. Beach didn’t let this impediment stop her from continuing to break down barriers. She turned her attention exclusively to composition, becoming essential in the building of the American classical music idiom as a member of The Second New England School. Beach, as you may know, was one of the first female composers to gain recognition for her masterful compositions. In addition to writing huge works for orchestra and chorus, she was also a skilled composer of chamber music.

Joseph Bodin de Boismortier (1689-1755) Concerto for 5 Flutes in B Minor, Op. 15, No. 4: III. Allegro Boismortier’s opus 15 includes six concerti, each for five flutes with no bass accompaniment. The early transverse flute seems to have been a particular specialty of Boismortier, by the time this piece was composed he had already written a substantial collection of pieces for one and two flutes, with and without accompaniment, as well as a treatise on flute playing. These compositions mark a great shift in baroque aesthetics in France, where composers still drew from Italian influences but were swapping beauty and drama for a lighter “prettiness” and elegant grace that was cultivated almost to the point of affectation. Boismortier’s chamber music would’ve likely been heard in an intimate setting like a salon, and would certainly have been for a private performance. Despite accusations that his musical productivity emphasized quantity over quality, Boismortier was always an innovator, and works like his flute concertos were key to developing the concerto as a genre in France.

Carl August Hänsel (1799- 1867) Quatuors originaux for Four Horns in F Major, Op. 75: IV. Adagio Carl August Hansel was a cellist and composer in Dresden during the early Romantic period. Since most of the music attributed to him are dances, marches and works for cello with piano, this quartet for four chromatic horns stands out as a unique composition. The concert horn had been enjoying increased technological developments and experimentation, first with keys and then with the introduction of valves. However these sorts of advancements were not always met with immediate enthusiasm. Many horn players were slow to adopt the valve horn, because while it made playing chromatic music easier, especially in the lower registers of the horn, it sacrificed the varieties of tone which the hand-in-bell technique provided, and which had already been popularized by Beethoven and Weber.

Traditional 18th c. Fisher's Hornpipe Mandolinist Chris Thile, who we hear counting this tune in, is no stranger to public radio. He first appeared on Minnesota Public Radio 20 years ago as a child prodigy, playing bluegrass, and later became the host of Live From Here, a music and variety show whose tenure was cut short by the pandemic. He collaborates on this recording with Mike Marshall, a mandolin virtuoso from the generation before Thile. While Thile has become known for his many forays into other music styles, Marshall laid the groundwork, bringing the mandolin from bluegrass and celtic styles into jazz, classical and latin with his supergroup Psychograss. This rendition of the Fisher’s Hornpipe comes from an entire album with Thile of mandolin duos titled Into the Cauldron. The album is notable for its mix of improvisation combined with intricately woven and composed counterpoint.