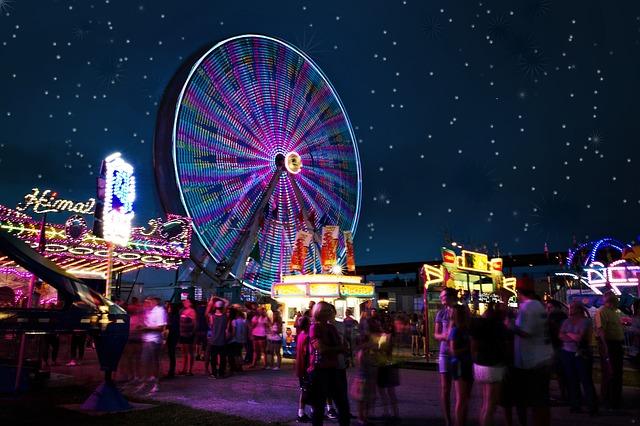 As we near the end of summer fair season, we're winding up his trusty calliope for some musical amusements. Browse our playlist from "Fairground Follies."

Antonín Dvorák (1841-1904) Carnival Overture, Op. 92 When Antonin Dvorak was fifty years old, he had a grand idea: to create a triptych of overtures dedicated to a trio of lofty concepts—Nature, Life, and Love. Eventually, the idea for one large opus was abandoned and he separated these into three separate opus numbers, with different titles. “Nature” became his op. 91 overture called In Nature’s Realm. “Life” became this overture, the “Carnival Overture,” a work that explores the communion of people in celebration and merriment. “Love,” the final overture, became known as Othello, named after the tragic Shakespearean character who “loved not wisely, but too well.” Today, the exuberant “Carnival Overture” is the only one that’s performed with any frequency.

Wolfgang Amadeus Mozart (1756-1791) Cosi fan Tutte, K. 588: 'Come scoglio' Cosi fan tutte, the third of the great operas from Mozart and librettist Lorenzo da Ponte, premiered in Vienna to great acclaim in 1790. The story revolves around two couples, Ferrando and Dorabella and Guglielmo and Fiordiligi. Under a bet from their mentor and confirmed old bachelor, Don Alfonso, the two men disguise themselves as “Albanians” and test their girlfriends’ fidelity by courting the opposite girl.  After a series of awkward situations worthy of a modern-day sitcom, the lovers learn a very important lesson: “All are alike” in that everyone is a teeny bit unfaithful every once in a while. In 2018, the Met Opera staged a Phelim McDermott production of Cosi, in which the 18th century setting was updated to the early 1960s, on the iconic Coney Island Boardwalk in New York. The highlight of the staging was a giant fully-functioning ferris wheel. Real circus performers and acrobats were also hired for the production, performing several highflying interludes during scene changes. The show was well-received, and the Met revived the production in 2020.

Modeste Mussorgsky (1839-1881) Sorochintsy Fair: 'Gopak' (arr. Rachmaninoff) When Modest Mussorgsky died at the age of 42, he left many works unfinished, including six operas. Among those operas was the work Sorochinsky Fair, based on the story by the famed Russian author Nikolai Gogol. Gogol’s stories have been interpreted by nearly every major Russian composer, including Tchaikovsky, Rimsky-Korsakov, and Shostakovich. The setting of the opera is a marketplace—the titular Sorochinsky Fair—where Gritsko, a peasant, wants to marry the beautiful Parasya. However, her father Cherevik won’t allow it. But when Cherevik is tricked into thinking the devil is out to get him, he agrees to let the two wed. At the end of the opera, all the characters celebrate by dancing this lively Gopak, a traditional Russian dance.The Gopak was transcribed by Rachmaninoff in 1924 for a lengthy concert tour which took the pianist from Canada, all across the US, and down to Cuba.

Hector Berlioz (1803-1869) Roman Carnival Overture, Op. 9 Berlioz composed his Ninth opus “Roman Carnival Overture” in 1844, a decade after the less than successful premiere of his opera Benevuto Cellini.  The opera tells the story of a sculptor who is struggling to make a living in 16th century Rome. The opera was a flop due to the extreme technical demands Berlioz made on the singers and instrumentalists, and also due to his mix of tragic and comic elements, which didn’t suit the Parisian audiences of the day. The “Roman Carnival Overture” shares a number of common elements with its operatic predecessor, beginning with the breakneck pace of the opening allegro. The English horn theme that follows is also lifted from the opera’s love duet, showcasing Berlioz’s knack for long-winded, irregular melodies. The overture has fared much better than its operatic counterpart, becoming a mainstay of the orchestral repertory.

Richard Rodgers (1902-1979) June is Bustin' Out All Over You may think a musical about a rough and tumble carousel barker working at the fairgrounds might be a simple, light-hearted affair. But you’d be wrong. Carousel was dark stuff for the Broadway stage in 1945. The plot is set in a close-knit New England fishing village, where the annual clambake celebration in June marks the end of spring and the beginning of summer. The carnival barker Billy, is a troubled, violent character, who dies halfway through the show and must seek atonement from his living relatives. However, Rodgers and Hammerstein keep things balanced with bright and bubbling numbers such as “June is Bustin’ Out All Over. Carousel openly approaches issues of class difference and spousal abuse. This darker territory was becoming common in Rodgers and Hammerstein musicals of the forties and fifties. The pair would deal with racial prejudice in South Pacific and Nazism in The Sound of Music.

Frederick Delius (1865-1934) Brigg Fair: An English Rhapsody English composer Frederick Delius called his set of orchestral variations Brigg Fair an “English Rhapsody.” And certainly, it has very English origins. It’s based on an old Lincolnshire folk song of the same name, about a man who rises early on an August morning to meet his true love at the fair. However, the man who first brought the old folk tune to the attention of modern society was not British, but rather Australian by birth. Australian composer Percy Grainger moved to England in the early 20th century and began collecting English folk music on wax cylinders, “Brigg Fair” being among those original folk tunes. Grainger became fascinated with the Dorian-mode melody and made a choral arrangement of the tune, which in turn inspired the rhapsody by Delius, who was a close friend of Grainger’s.

Felix Godefroid (1818-1897) Carnaval de Venise, Op. 184 The melody known as “Carnival of Venice” reached its height of popularity when Paganini used it as the main theme for his impressive set of twenty variations for violin. Long thought to be based on a Neapolitan folk song called O mamma mamma cara, the tune can actually be traced to a musician named Cifolelli who first wrote and popularized the melody in France as a dance number called “La Cifolella”. It was later turned into standard repertoire for mechanical dance hall and fairground organs, though the “carnival” in the song title actually refers to the period of celebration preceding Lent. Chopin, Liszt and Bochsa have all composed settings of the tune, as well as the Belgian harpist and Romantic composer Felix Godefroid, whose own set of variations for solo pedal harp has become a mainstay of advanced harp concert music.

Francis Johnson (1792-1844) The New Bird Waltz/Boone Infantry Brass Band Quickstep Frank Johnson’s career flourished between the end of the Revolutionary War era and the events which led to the Civil War. Little is known of his early life. An African-American born in the West Indies, he began his musical career in Philadelphia, learning to play the keyed bugle and becoming a bandleader. The professional accomplishments of Johnson cannot be overstated, especially in light of the fact that his music and importance have been virtually forgotten. He was a successful musician during a period when full-time musicians were rare in the United States, and his popularity and success increased even as race relations soured across his home country. Johnson became known for his band compositions and his own skill on the keyed bugle and violin, which he exhibited with the first American band to tour Europe. Much of his music was written for his bands to perform at fairs, parades and various celebrations, mostly in Philadelphia, which Johnson helped make one of the first great cultural centers of the United States.

Hank Crosby, Smokey Robinson, and Stevie Wonder Tears Of A Clown The melody to “Tears of a Clown” was originally written by Motown songwriter Hank Crosby and a 17-year-old Stevie Wonder, but they couldn’t think of any lyrics. So they brought the song to Smokey Robinson to see if he could think of something clever. Smokey thought the music sounded kind of like a circus, so he made the song about a sad clown à la Pagliacci, the main character of Leoncavallo’s 1892 opera. Robinson, in fact, was reusing that Pagliacci line—he had already put the same line in the 1964 Motown song “My Smile Is Just A Frown (Turned Upside Down)” for Carolyn Crawford. Smokey Robinson and the Miracles recorded “Tears Of A Clown” in 1967, but it wasn’t until 1970 that it became a number one hit.