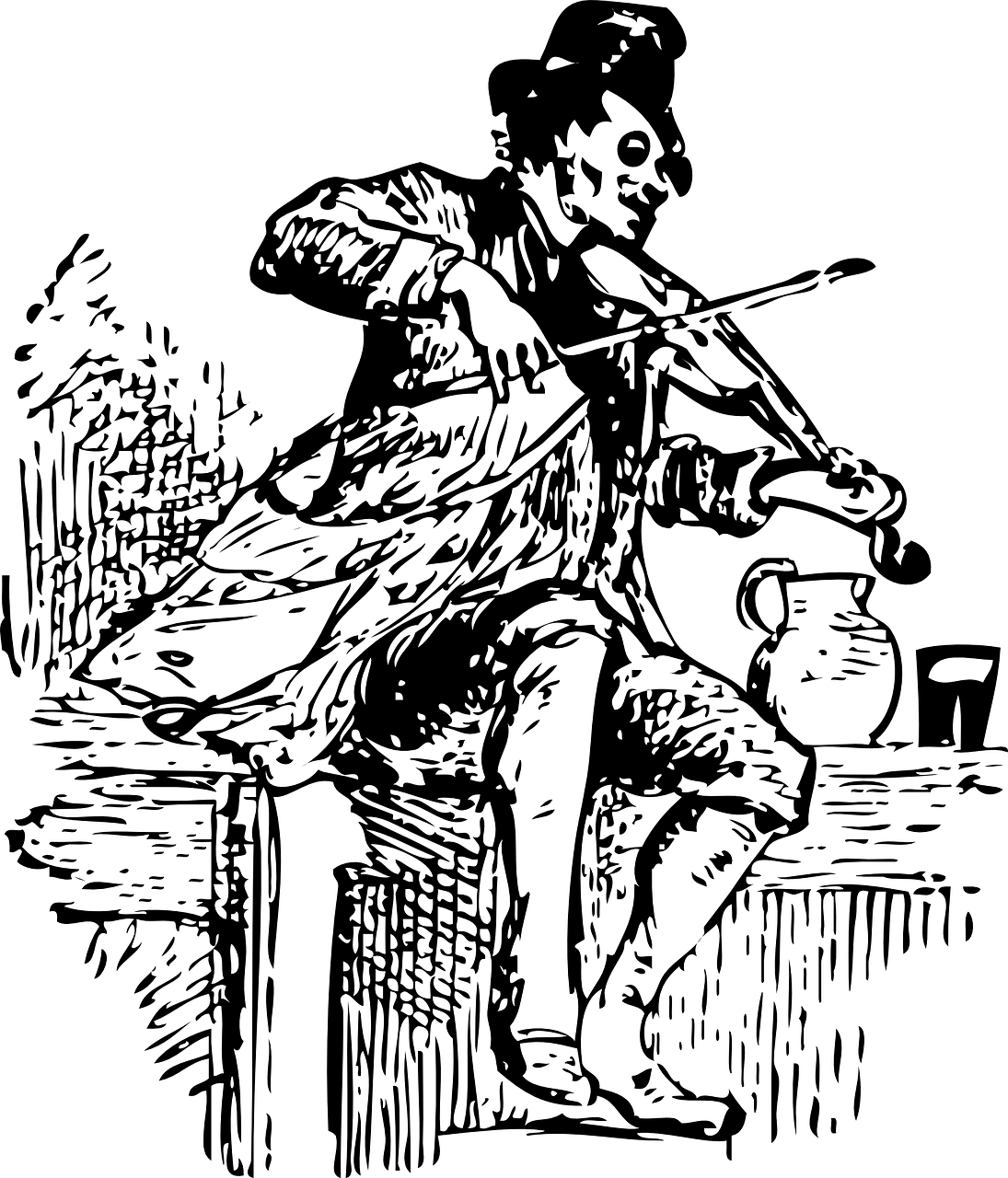 Bartok said “Folk music is the embodiment of artistic perfection.” We’re putting his claim to the test on Ether Game as we search out folk melodies in classical music.

Ludwig van Beethoven (1770-1827) 12 Irish Songs, WoO 154, Op. 225, No. 4, The Pulse of an Irishman, No. 25 O Harp of Erin Beethoven arranged more than 25 tunes based on popular songs or poems of various European cultures. We just heard two of several Irish songs he chose, alongside Scottish, English, Welsh, Danish and Russian folk melodies. This variety suggests a certain amount of enthusiasm on Beethoven’s part, but in fact, the opposite was true. He pushed these arrangements into publication in order to make money to support his orphaned nephew, Karl. Beethoven even set aside more artistically challenging projects in the name of this cause. Later, he intended to publish more folk song arrangements, with the goal of promoting a brotherhood of all European peoples, but his publisher was not interested. This was despite the earlier success of the arrangements we just heard. They were first published in England and Scotland in the original English, and proved so popular that they were later issued in Beethoven’s native German.

Gustav Holst (1874-1934) Japanese Suite, Op. 33 Holst's Japanese Suite is one of his most rarely recorded works, even though he composed it while in the midst of completing his most popular masterpiece, The Planets. Holst produced the Japanese Suite at the request of an immigrant Japanese dancer named Michio Ito, who wanted to dance on the London stage to modern music derived from the folk tunes of his homeland. The story goes that Holst didn't know any Japanese folk songs, so Ito whistled a couple melodies to him. It is unknown if Ito actually danced to the Japanese Suite, though Holst himself conducted a concert performance of the work in 1919. The performance was met with some controversy. Critics questioned Holst's commitment to British nationalism through his music. Ironically, the Japanese Suite has since been criticized for its “westernization” of Japanese melodies, many of which were re-harmonized by Holst to fit  his style.

Charles Ives (1874-1954) Holiday Symphony: 'Washington's Birthday' As Charles Ives declared in his Memos, his wife Harmony’s unwavering faith in him and his music was crucial to Ives’ immense and diverse output.  Although she admitted she didn’t understand all of his music, she fully supported whatever Ives wrote, and encouraged him to uphold the Romantic idea of music based on individual emotional experience.  Harmony also took a keen interest in Ives’ father, a town bandleader, and rekindled in Charles Ives the memories of his youth.  This “band” sound manifested itself in several of Charles Ives’ mature works, including Washington’s Birthday. We just heard the middle portion of the work in which Ives quotes a variety of American fiddle tunes, what he described as “country fiddling at a barn dance.” He also included the whimsical jaw harp or jews harp,  a drone instrument synonymous with early American folk music.

Ralph Vaughan Williams (1872-1958) Norfolk Rhapsody No. 1 Before Vaughan Williams’ music became popular both at home and around the European continent, English classical music was not thought to be particularly distinctive. Not since Henry Purcell had many music historians bothered to name an English composer that contributed significant work to the western canon. This changed through Elgar, Holst, Britten and Vaughan Williams, who all turned to English folk music to help craft a musical identity. Vaughan Williams collected many folk melodies from the countryside of the English county Norfolk, where he spent time in the fishing village King’s Lynn. He composed three rhapsodies on tunes from the area; the one we just heard is the only surviving. His famous Fantasia on Greensleeves also includes a tune he collected in Norfolk, employed as a countermelody to the famous ballad.

Leos Janácek (1854-1928) The Cunning Little Vixen Alongside Bedrich Smetana and Antonin Dvorak, Leos Janacek completed the trio of popular Czech composers who introduced the Czech style into the Western canon of classical music in the Romantic Era. Like Smetana and Dvorak, Janacek incorporporated folk traditions from his homeland into his compositions, drawing heavily from the music of the Moravian region of the Czech Republic to create modern style. Though he is perhaps the least well-known of the trio, Janacek’s music is the most original. His method for incorporating Czech folk music differers completely from his contemporaries. Rather than crafting melodic lines inspired by or borrowed directly from folk music, Janacek  explored the abstract characteristics of the tradition and reassembled them into art music. His opera The Cunning Little Vixen is one of his most popular works and is based on  a comic-strip about a clever little fox who goes on adventures with various wildlife, and even a few humans.

Mily Balakirev (1837-1910) Octet, Op. 3 Mily Balakirev was actually quite a successful composer in his day, writing many songs, two symphonies, several symphonic poems, overtures, many piano pieces, and chamber music such as this octet.  He was also active as a collector and arranger of Russian folk music.  His influence was mostly strongly felt in the unification of the five most prominent Russian composers of the day into a group that would become known as “The Five”, or “The Mighty Handful”.  This group included Cesar Cui, Alexander Borodin, Modest Mussorgsky, and Rimsky-Korsakov, with Balakirev as the de facto leader. This “Mighty Handful” set themselves apart from the cosmopolitan tastes of the national conservatories and composers like Tchaikovsky by trying to write music that was derived from uniquely Russian roots. Their influence was felt for generations, especially in the music of Stravinsky, Prokofiev, and Shostakovich.

Joseph Guy Ropartz (1864-1955) Prélude, Marine, et Chanson Joseph Guy Ropartz was both a successful composer and poet, and an important contributor to the cultural renaissance that occurred in his homeland Brittany during the late nineteenth century. After his studies at the Paris Conservatory, where he was taught by both Franck and Massenet, he became a conductor and music director in Nancy and later in Strasbourg. Though he was a conservatory student, Ropartz rejected academicism, and did not believe a creative artist could work according to a preconceived aesthetic dogma. He forged his own personal style influenced by the then-contemporary art and literature of the Bretons around him. While he did often incorporate french folk music in his work, he was mainly focused on evoking an atmospheric “sense of place” inspired by the wild and deeply mysterious northwestern French landscape. His quintet Prelude, Marine and Chansons illustrate his preference for composing in modes and using a rich post-Wagnerian chromatic style.

Derek Healey (b.1936) Six Canadian Folk Songs: Inuit Hunting Song This choral arrangement is based on a folk song from the Inuit people, the indiginous group that occupies the Northwest Territories in Canada. Known for their semi nomadic lifestyle, following herds of caribou across the tundra, this setting of a hunting song is taken from a 1950 field recording at Beaver Lake, a widened area of the Mackenzie River. The soloist is the hunter, who sings of hunting caribou. THe supporting choir acts as the inuit community joyously celebrating the hunt in a terraced vocal line that creates shimmering harmonies. This piece is one of six canadian folk song settings by English composer Derek Healey. While getting his music education in England, Healey studied composition with a master of choral music: Herbert Howells. Healey currently lives in New York, but before that he spent a decade in Canada teaching at the University of Victoria.

Harry Clifton (1824–1872) Rocky Road to Dublin The celtic folk band The Dubliners got their start in the early 1960s performing in a pub called O’Donaghues under the name The Ronnie Drew Ballad Group, but later changed their name to one based on a story by Irish author James Joyce. The Dubliners had a few hits in the late 60s including “Seven Drunken Nights,” “Whiskey in the Jar,” and “The Auld Triangle,” however they gained attention from a new audience when their 1964 recording of “The Rocky Road to Dublin” was used in the popular 2009 film Sherlock Holmes. The song was originally written by D. K. Gavan, known as “The Galway Poet” for an English music hall performer in the mid nineteenth century, and has become standard repertoire in Irish folk music, with many well-known folk musicians recording their own versions and variations. In their 50-year career The Dubliners have influenced countless performers and officially retired in 2012, after receiving a Lifetime Achievement Award that same year.