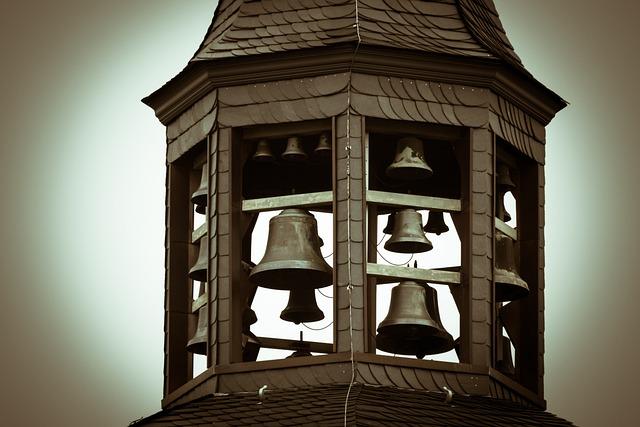 THis week, we ascended the belfry to chime nine rounds of bell-themed classical music. Browse below for our pieces featuring bells, chimes, jingles and jangles.

Mozart, Wolfgang Amadeus (1756–1791) DIE ZAUBERFLÖTE ("THE MAGIC FLUTE"): Papageno: "Ein Mädchen oder Weibchen" The most famous set of bells in opera history are probably the enchanted bells we hear accompanying Papageno in this aria from The Magic Flute. When we hear this piece, both Papageno and his friend Prince Tamino are enduring the initiation trials of the Brotherhood of Wisdom, a masonic-like group that helps Tamino rescue the Princess Pamina. Papageno gets swept up in Tamino’s quest because the brotherhood has also promised to give him a wife, a “Papagana,” should he pass their trails. During the lonely Trial of Silence, Papageno brings out his magic bells to accompany a song in which he sings about his lovesickness. For modern productions, the magic bells part is usually performed on a celesta. However in Mozart’s time it would have been played on a keyboard GLOCKENSPIEL. This consisted of a set of chimes that were connected to an organ manual, allowing more versatility than was possible with a set of mallets.

Leory Anderson (1908–1975) SONG OF THE BELLS (1953) Bells have long been associated with Christmas. Churches ring bells on Christmas Day, and horse-drawn winter sleighs are usually decked with jingle bells. So naturally, Leroy Anderson’s “Song of the Bells” from 1953, contains these Christmas connotations. Anderson wrote dozens of pops orchestra favorites in the 20th century, including “The Waltzing Cat” and “The Syncopated Clock,” but he seems to be most associated with Christmas. This probably has to do with Anderson’s most popular composition, Sleigh Ride. This perennial winter favorite, however, was actually written during a pretty significant heat wave in Connecticut in 1948. That seemed to be the case for most of Anderson’s many Christmas tunes. In order for the music to be recorded, processed, and shipped for the holiday season, he had to write most of them in July.

Vaughan Williams, Ralph (1872–1958) A LONDON SYMPHONY (SYMPHONY NO. 2): I. Lento: Allegro risoluto As originally written in 1912, Vaughan Williams's second symphony was supposed to be an example of absolute, non-programmatic music. But Vaughan Williams couldn’t help but add a little character to it. While it doesn’t quite tell a story, the symphony does evoke various scenes from his hometown of London (hence the name “A London Symphony.”) Various movements represent sounds from Hampstead Heath, Bloomsbury Square, or from Big Ben (which is not the clock, but rather the bell inside of the clock tower in Westminster). In this movement, the harp quietly plays the Westminster Chimes (otherwise known as Westminster Quarters or Cambridge Chimes). These chimes were likely written by the unfortunately named William Crotch, a student at Cambridge University in 1793, as part of a set of variations he wrote on the tune “I Know My Redeemer Lives.” Today, these chimes are rung by Big Ben, and countless other clocks and door bells.

Mussorgsky, Modest (1839–1881) BORIS GODUNOV: Coronation Scene Boris Godunov is Modest Mussorgsky’s only opera, but also his masterpiece and one of the most performed Russian operas worldwide. Based on a play of the same name by Alexander Pushkin, Boris Godunov also has the bizarre distinction of being one of the most heavily edited operas of all time. VERY few recordings exist without cuts or editing, or are even sung in the original Russian. The second and most widely performed revision of 1872 includes historical details from a contemporary volume released by official court historian Nikolai Karamzin. The Coronation Scene is one of the opera’s most memorable moments and occurs as the final scene of the opera’s prologue. As we heard, the chorus is preceded by an instrumental introduction which is indicative of ringing bells. Real church bells are then heard as a crowd gathers in the cathedral square of the Moscow Kremlin to witness the procession of the Czar and sing his praises.

Pärt, Arvo (b. 1935) Spiegel im Spiegel Beginning in the mid 1970s, Estonian composer Arvo Pärt began writing in a style that he referred to as Tintinnabuli. Tintinnabuli, as you may have guessed, is related to the onomatopoeic term “tintinnabulation,” which means the ringing of bells. Like “ting” or “tinkle,” tintinnabulation derives from the Latin word tintinnare, which itself is an onomatopoeic term meaning to ring or jingle. It’s used famously in Edgar Allen Poe’s poem The Bells: “the tintinnabulation that so musically wells / From the bells, bells, bells, bells, / Bells, bells, bells.” For Arvo Pärt, tintinnabuli means the continuous tolling of a major triad, accompanied by stepwise motion to create a calm, minimalist landscape. In this work Spiegel Im Spiegel (which means “Mirror in the Mirror”), you can hear the tintinnabuli style clearly in the piano. Around this piano tolling, the violin explores the major scale, creating a musical mirror that reflects over a single pitch.

Tavener, John (1944–2013) THE LAST SLEEP OF THE VIRGIN (A Veneration for String Orchestra and Handbells) John Tavener’s works are often deeply religious in character, and while they have a twentieth-century sound, they are also lyrically melodic and draw on the modal harmonies of the early Christian church. All the same, it would be hard to mistake his music for that of sixteenth-century English composer John Taverner. The piece we just listened to combines ambient drones from a modern string orchestra with a handbell choir ringing out chant melodies that date back to the medieval church. The handbell choir is itself an ancient ensemble. However, unlike the modern handbell which uses an interior clapper and a handle for ringing, the medieval bell choir used large wooden frames from which bells were suspended called bell trees. Rather than swinging the bells, the player would use a set of wooden mallets padded with leather to strike the outer surface, chiming out the chant melodies.

Ketèlbey, Albert (1875-1959) BELLS ACROSS THE MEADOW Albert Ketèlby was one of the most successful conductors in late-Victorian London. Whereas most serious composers of the time often hid their love of popular music, Ketèlby’s success as a performer of popular music led him to adopt a series of ethnic pseudonyms, under which he composed in more serious genres. For example, his Russian-styled piano works were written under the alias Anton Vodorinski. His light orchestral pieces are an example of a lost genre known as the “Palm Court Sound” named after the musicians of the Palm Court Theatre Orchestra. Before World War II, many of London’s finest hotels housed sizable orchestras who entertained guests with colorful romantic works which, while perhaps lacking novelty, were fashionable, glamorous and easy to please. They often created sentimental mood pictures of exotic travel destinations and idealized picturesque landscapes.

Tournier. Marcel (1879-1951) IMAGES: Suite no. 4 Cloches Sous La Neige Marcel Tournier was a ground-breaking composer for the concert harp, and was considered a master performer of the instrument, which had been newly improved  with its double-action pedal mechanism, He wrote almost exclusively for harp, greatly expanding the repertoire and exploring new effects and tonalities which were inspired by French 20th century art and literary movements such as Impressionism and Symbolism. His series of works composed from 1925-1932 titled Images ,which are divided into four suites, are still popular among harpists. Each movement of the Image suites has an evocative and poetic title like Bells In the Snow.

Knight, Frederick (b. 1944) RING MY BELL Anita Ward’s first brush with show business happened when she was 14, when she was offered a recording contract that was ultimately rejected by her parents. Later when she was 21 and singing in the famed choir at Rust College, another opportunity came when she caught the attention of songwriter Chuck Holmes, who offered to be her manager after seeing her audition for a role in the musical Godspell. “Ring My Bell” was released as a single after the modest success of her debut track “Spoiled by Your Love.” The track was a disco rewrite of a teenybopper song originally written by Stax recording artist Frederick Knight. The international success of “Ring My Bell” jettisoned Anita to stardom and she began appearing at many popular venues and television programs. She was eventually nominated for a Grammy for Best Female R&B Vocal Performance in 1980. Unfortunately her two albums never achieved the same success as her single, and Holmes’ death in 1981 seemed to be the death-knell for her career, after which she left the music industry, became a teacher and focused on raising a family.