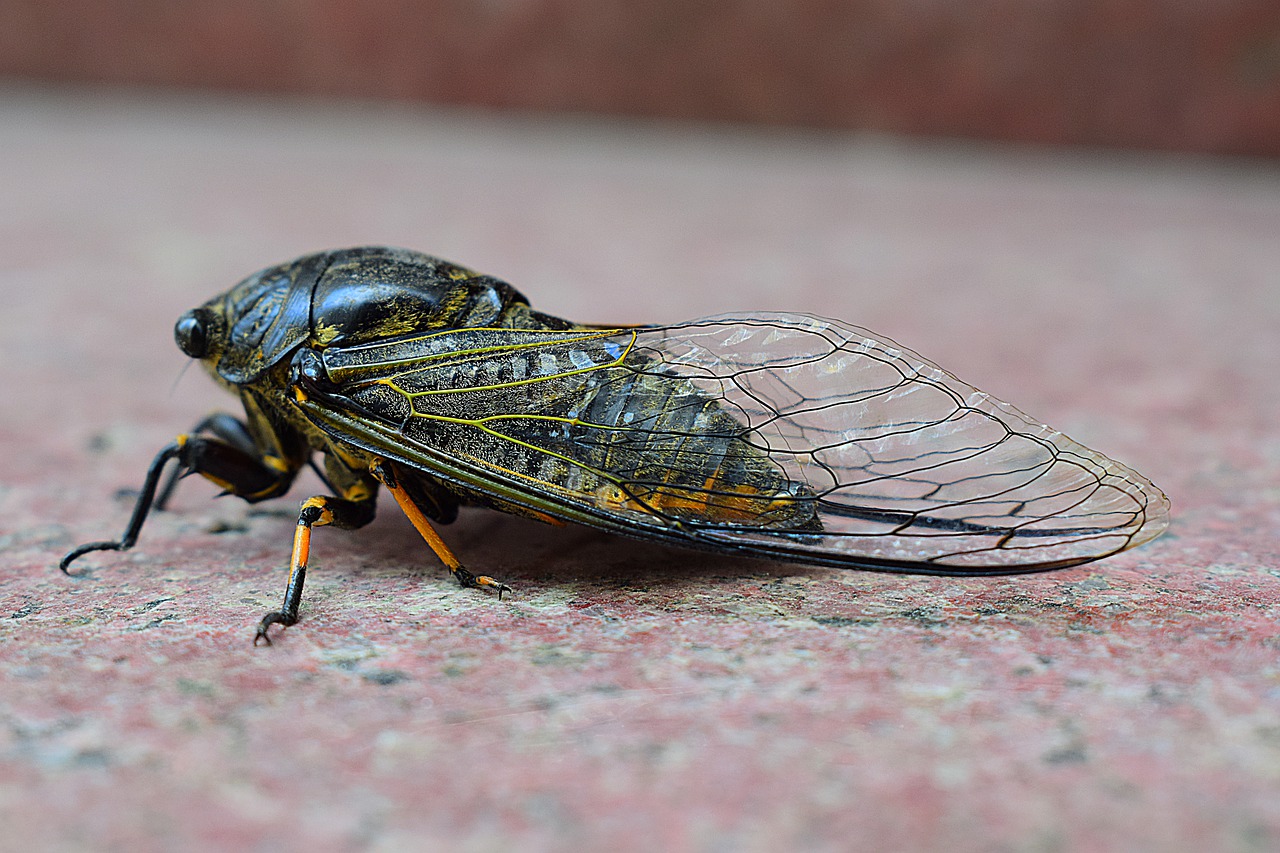 A huge crop of cicadas is set to emerge this week in Indiana. Some of us have already started seeing them, and it has inspired the Ether Game Brain Trust to present a show about bugs and classical music.

Edvard Grieg (1843-1907) Lyric Pieces, Op. 43: No. 1, Butterfly, Lyric Pieces, Op. 54: No. 3, March of the Trolls Norwegian composer Edvard Grieg is perhaps best-known today for his ten sets of Lyric Pieces for piano.  The first of these were begun in 1864 and the last completed in 1901, making them representative of the composer’s entire career.  Furthermore, these pieces have served as instructional pieces for generations of piano students.  These pieces create a variety of moods, and are often inspired by both Norwegian folk music and references to nature. Such is the case with these selections, the insect-inspired piece “Butterfly” and “March of the Dwarves.” Or is it March of the Trolls? The Norwegian name for the piece, Trolltog,  uses a word from Norwegian mythology which has never been easily translated. Until recently, the word troll could just as well describe a werewolf, a witch, an elf, or simply a ugly person. However it seems that regardless of the designation, a troll is a being who always dwells in the mountains and has a supernatural or unfamiliar aspect about them.

Ralph Vaughan Williams (1872-1958) The Wasps: Overture The Wasps, a comedy from around 422 B.C. by ARISTOPHANES is a political satire, poking fun at the Athenian jury system. These juries often contained 500 people or more, mostly older men with no other means of support. These jurors were dressed as wasps because they were crowded together like wasps in a wasps’ nest and were quick to anger and hurt those they dislike. In 1909, Trinity College in Cambridge put on production of the ARISTOPHANES’ play, and Vaughan Williams was tasked with writing this buzzing incidental music. After The Wasps, Vaughan Williams was stung by the incidental music bug, and within a few years he composed incidental music for three plays by another Greek author, Euripides: The Bacchae, Electra, and Iphigenia in Tauris.

Harold Arlen (1905-1986) Yip Harburg (1891-1986) lyr. The Jitterbug The deleted songs and scenes from the 1939 classic The Wizard of Oz have an almost mythological status in film history because there is often a scant amount of surviving evidence that they were filmed at all. This is the case with the deleted number “The Jitterbug” sung in a swing style by Judy Garland. The Jitterbug originally appeared as a mosquito-like rascal sent by the Wicked Witch of the West to detain our protagonists in the Haunted Forest. Only the original audio and some silent amature rehearsal footage currently exist of this sequence. The scene was cut by filmmakers when the initial version of The Wizard of Oz was deemed twenty minutes too long, and  they also worried including a song in the then-contemporary style would forever date the film. It is also likely that MGM was wary of an earlier association with the Jitterbug-that of an unhinged style of dancing due to the consumption of alcohol.

Frédéric Chopin (1810-1849) Etude Op. 25: No. 2 in f, Etude Op. 25: No. 3 in F The music of Chopin is a staple of every professional pianist's repertoire. Not unlike other composers, Chopin produced sets of études for the piano. Every set that had appeared before Chopin accomplished its instructive task, but tended to remain musically dry. The remarkable thing about Chopin’s etudes is their musical potency in addition to finger-twisting madness. This etude, for example, alongside its technical qualities, evokes a busy swarm of bees. Chopin’s bumblebees though, are perhaps a little less manic and urgent than those of Rimsky Korsakov. Chopin wrote two sets of études, opuses 10 and 25, from which our selections were taken. Chopin’s second set was dedicated to Franz Liszt’s mistress, the Countess Marie d’Agoult.

Desprez, Josquin (c.1440-1521) El grillo [The cricket] Josquin’s frottola El Grillo, or “the cricket,” is found in a single manuscript dating from 1505. The piece employs various devices to depict the text, including a number of notes on the single word “long,” and chirp-like alternations between the singers. The composition probably comes from Josquin’s stay in Milan. At the same time, Ercole d’Este was looking for musicians to serve at court in Ferrara, and was interested in hiring Josquin, whose reputation was considerable. Not only was he known as a great composer, but he was also known as something of a prima donna, composing at his own will rather than that of his patrons. Despite these warnings, and his high salary demands, Josquin was maestro di cappella in Ferrara for one year, from April 1503 to April 1504. It is most likely that Josquin left the post due to an outbreak of PLAGUE. If so, it was a wise move—his successor, Jacob Obrecht, died of the PLAGUE the following year.

Jean Sibelius (1865-1957) En slända [A Dragonfly], Op. 17, No. 5 Jean Sibelius is mostly remembered for his enduring symphonic works, but he also composed songs, beginning as early as his student days at the Helsinki Institute of Music in 1888. His Op. 17 collection was composed only a couple years later in the 1890s and gives us a snapshot of the very early musical voice of Sibelius. The young composer was still searching for a true personal style, and thus the collection is a mixed bag, however A Dragonfly is one of the gems of the collection. The lyrics describe a melancholy scholar who is cheered by the sight of a dragonfly. She praises the bug as it flies by, gone as quickly as it came. She sings “Fly away, blue light of summer happiness/ Blessed and once mine/My beautiful dragonfly.

Paul Linke (1866-1946) Glühwürmchen (Glow Worm) Idyll for Orchestra Paul Lincke was to Berlin what Strauss was to Vienna or Offenbach to Paris. He gained his reputation through conducting and writing mostly light classical music in the form of operettas, popular songs and orchestral dance music like waltzes and polkas. One of his most recognizable pieces which achieved international success was a symphonic idyll titled Glühwürmchen, or the Glow Worm, which was taken from a 1902 operatic adaptation of the play Lysistrata. The Glow Worm, which was written in the form of a Gavotte, has become more popular in America outside of its operatic context as a standalone song, especially when a single recorded by the Mills Brothers with revised lyrics became a top selling hit in 1952.

Albert Roussel (1869-1937) Le festin de l'araignée [The Spider's Banquet], op. 17 Highly influenced by Debussy and Ravel, Albert Roussel became one of the more prominent French composers of the early 20th century. His 1912 pantomime ballet The Spider’s Banquet, based on a scenario by Gilbert de Voisins, certainly evokes the Debussyan impressionist sound world. In this piece, Roussel presents a tableaux of insect life in a garden: first the ants enter, followed by a butterfly, and one by one the insects get trapped inside the spider’s web. But no bug is safe inside the garden! Just as the spider is about to feast on his meal, he is challenged by a praying mantis. Our once mighty predator has now become the prey for the mightier mantis. All the while, we see the hatching of the ephemeral mayfly, and shortly thereafter, the mayfly’s funeral procession.

Devendra Banhart (b. 1981) Little Yellow Spider The music of singer-songwriter and visual artist Devendra Banhart has been described under various labels like psychedelic-folk, freak-folk, naturalismo and “New Weird America,” a term applied retroactively to certain hippie-minded folksingers in the 1960’s. With a nod to both folk music and 60’s and 70’s counterculture, Banhart’s music mixes his Venezuelan roots with a heavy dose of surrealism, writing free-association lyrics and meditative guitar motifs. In true indie-musician fashion, Devendra Banhart’s first musical demos were recorded on an answering machine, which were eventually compiled and released as a full album by Young God Records to favorable reviews, with listeners appreciating his simple acoustic sound and unique vocal style. He has since significantly branched out to many musical styles, having since recorded ten albums and performed at Carnegie Hall and the Hollywood Bowl.