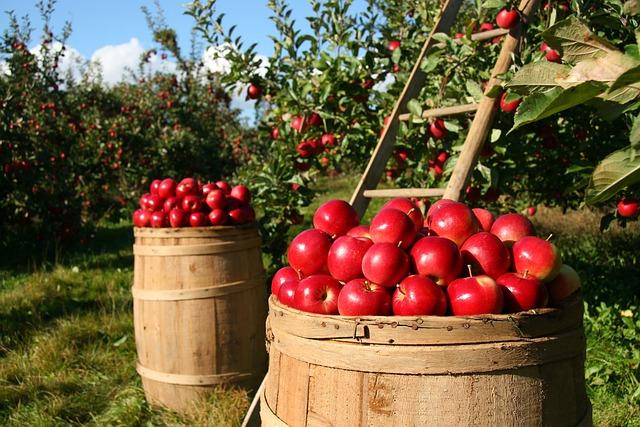 This week, we headed to the orchard to get to the core of classical music. Browse our playlist featuring Fall's favorite fruit, the apple!

Englebert Humperdinck (1854-1921) Hansel and Gretel: Overture Lavish feasts appear in several great operas: Don Giovanni, La Boheme, and Elixir of Love to name a few. Hansel and Gretel surely sits at the top of the list, with an entire gingerbread and candy house appearing on stage to tempt Hansel and Gretel into the witch’s clutches. You might think that eating on stage would be an issue for any theatrical singer, operatic or otherwise. How could Hansel or Gretel sing with a mouth full of dry, crumbly gingerbread? In fact, there is a stage trick that many opera companies use to solve this issue. If a singer is required to bite into a piece of food during a scene, that food is often carved or sculpted from an apple! Singers and prop-masters discovered that the firmness of apple flesh not only helps the fruit keep the shape of whatever it is carved as, the water in the apple also helps the singer’s voice. A win-win for all involved, unless I suppose, you don’t care for the taste of apples.

Igor Stravinsky (1882-1971) The Firebird: Scene I: The Princesses' game with the goldem apples/Sudde appearance of Ivan Tsarevich The story of Stravinsky’s ballet The Firebird comes from Slavic mythology about a magical bird that would be a blessing and a curse to its owner. In the ballet, a prince captures the Firebird and uses its powers to rescue a princess from the clutches of an evil goblin. When the prince first meets the princess and her twelve sisters, they are all playing a game with golden apples from an enchanted garden. The Firebird was the first of three ballets in Stravinsky’s so-called “Russian Period,” a period early in his career where most of his music was based on themes from his home country. It was also a commission for Sergei Diaghilev’s famed Ballet Russes, a Parisian ballet company whose purpose was to introduce Russian music and choreography to Western Europe. The Firebird was a huge success in Paris, and put the young, unknown Stravinsky on the map.

Franz Schubert (1797-1828) An die Apfelbäume, wo ich Julien erblickte, D. 197 (To the Apple Trees, Where I Glimpsed Julia) When it comes to German art-song, or lieder, Schubert is often proclaimed  king. He did write about 600 of them, and made a career giving private performances in salons and elite gatherings. Schubert’s early lieder were settings of poems from a group called the Göttingen circle, of which the lyricist of tonight’s liede, Ludwig Hölty, was a member. The poets of the Göttingen circle are often associated with two complimentary artistic movements that influenced  literature and music in the late 18th century: Empfindsamkeit (the Sensitive style) and Sturm und Drang (Storm and Stress). Interest in these movements produced poems that explored the deepest reaches of the heart, the reaction of the soul in the face of all aspects of life and death, all infused with a sense of melancholy. As Hölty wrote in tonight’s selection: May a flower bloom, when we are dead, from every lawn touched by her foot. And may each of its leaves bear the name of my exalted love.

Gerald Finzi (1901-1956) Clarinet Concerto in c, Op. 31 Finzi’s Clarinet Concerto was originally written for clarinetist Pauline Juler, the niece of English pianist and composer Mary Lucas, however she withdrew from performing due to her marriage and subsequent pregnancy. When she resumed, Finzi presented her with another work, his Five Bagatelles for piano and clarinet, which she did debut, and which have since been orchestrated as a popular concert piece. Important for tonight;s theme is that while Finzi is appreciated for his contributions to English music, he was also a keen apple grower, and saved many rare English varieties of apple from extinction. Vaughan Williams even said of Finzi that quote “Finzi was almost as keen on reviving forgotten varieties of apples as the works of forgotten English composers”

Johnny Mercer/M. Philip Gerard (1951) When The World Was Young (Ah, The Apple Trees) Bing Crosby introduces this song by telling us it comes from Paris. That’s because the original song and lyrics were written by Philip Gerard and Angele Vannier, a songwriting duo who wrote for Paris’s “national chanteuse” the internationally renowned Edith Piaf. Ah, The Apple Trees was originally titled “Le Chevalier de Paris,” the Knight of Paris, and  Johnny Mercer’s American lyrics are not much like the original French words, although both keep the line Ah’ the Apple Trees as a refrain. In the French version, Piaf sings a very idiomatic tale of a Perisian city-dwelling knight looking for his sweetheart, with references to Parsifal. Mercer’s  version for Bing Crosby is a little more straightforward. A man living in Paris recalls the countryside of an earlier time, punctuated by apple trees. He sings wistfully of his nostalgia.

Mark O'Connor (b.1962) Johnny Appleseed Suite: Johnny's Apple Pie Multi-instrumentalist and composer Mark O’Connor has become one of the most trusted names when it comes to the performance and preservation of Americana music. In addition to being a virtuoso fiddler, and critically-acclaimed composer, O’Connor is a pedagogue, developing the “O’Connor Method” of string playing. Consider it like the American answer to the Suzuki method, with more emphasis on improvisation and a heavy dose of American folk music. The “Johnny Appleseed Suite,” a tribute to the real-life pioneer nurseryman John Chapman, began its life as a work for children. It originally had narration, telling how Chapman wandered America helping homesteaders stake claims in the west by planting apple trees (one of the easiest ways to claim land in early America was to plant an orchard). The work has been transformed here into a concert piece, replacing the narration with O’Connor’s own fiddling.

Philip Glass (b.1937) The Orchard (From "The Screens") (Arr. for Violin & Piano) Modernist playwright Jean Genet was moving from absurdist theater into political realism when he wrote his epic drama The Screens in 1961. The play has no narrative structure, but presents 17 vignettes centered around Algeria’s struggle for independence from France. Offering an acerbic critique of colonialism and Europe’s notion of “arab-ness,”  the play requires a cast of over fifty characters and a massive, four-story open-air stage, where rolling screens separate the living and the dead. When the Guthrie Theater in Minneapolis staged The Screens in 1989, Philip Glass eagerly took the opportunity to collaborate with West African griot Foday Musa Suso in composing incidental music. Glass’ minimalism and Suso’s modal improvisations on the traditional West African kora musically paralleled the east-meets-west themes of the play.

Antonio Cesti (1623-1669) Il Pomo d'oro: Sinfonia The debut of Antonio Cesti’s mythological opera in 1668 was a grandiose affair, composed to mark the 17th birthday of The Holy Roman Empress, Margaret Theresa of Spain. The lengthy work was performed over two days on a huge, specially constructed stage which could support at least 24 different sets and magnificent mechanical effects like collapsing towers and shipwrecks. The classic Greek myth it portrays is familiar. When Eris the goddess of discord is not invited by Zeus to a wedding, she throws a golden apple inscribed with the words “to the fairest” into the banquet hall. Hera, Athena and Aphrodite all vie for the apple, and eventually Paris is called to judge which goddess is the fairest. His decision to choose Aphrodite in exchange for the kidnapping of Helen of Troy ultimately starts the Trojan War. However during Cesti’s opera, in what is perhaps an eye-rolling twist, the contest ends by Zeus taking the apple and handing it to Empress Margaret Theresa.

Esperanza Spalding (b.1984) Apple Blossom After her surprise win for Best New Artist at the Grammys in 2011, jazz bassist Esperanza Spalding's third album Chamber Music Society received renewed attention a year after it was released. The album combines a classically-influenced string section with Spalding’s virtuosic and at times delicate command of the bass, as well as her emotive vocals. The album was re-released on vinyl in 2011 with bonus tracks. Like the majority of her music, Apple Blossom is an original composition, though Spalding has also used poetry, in particular William Blake’s poems, as a source for her lyrics.