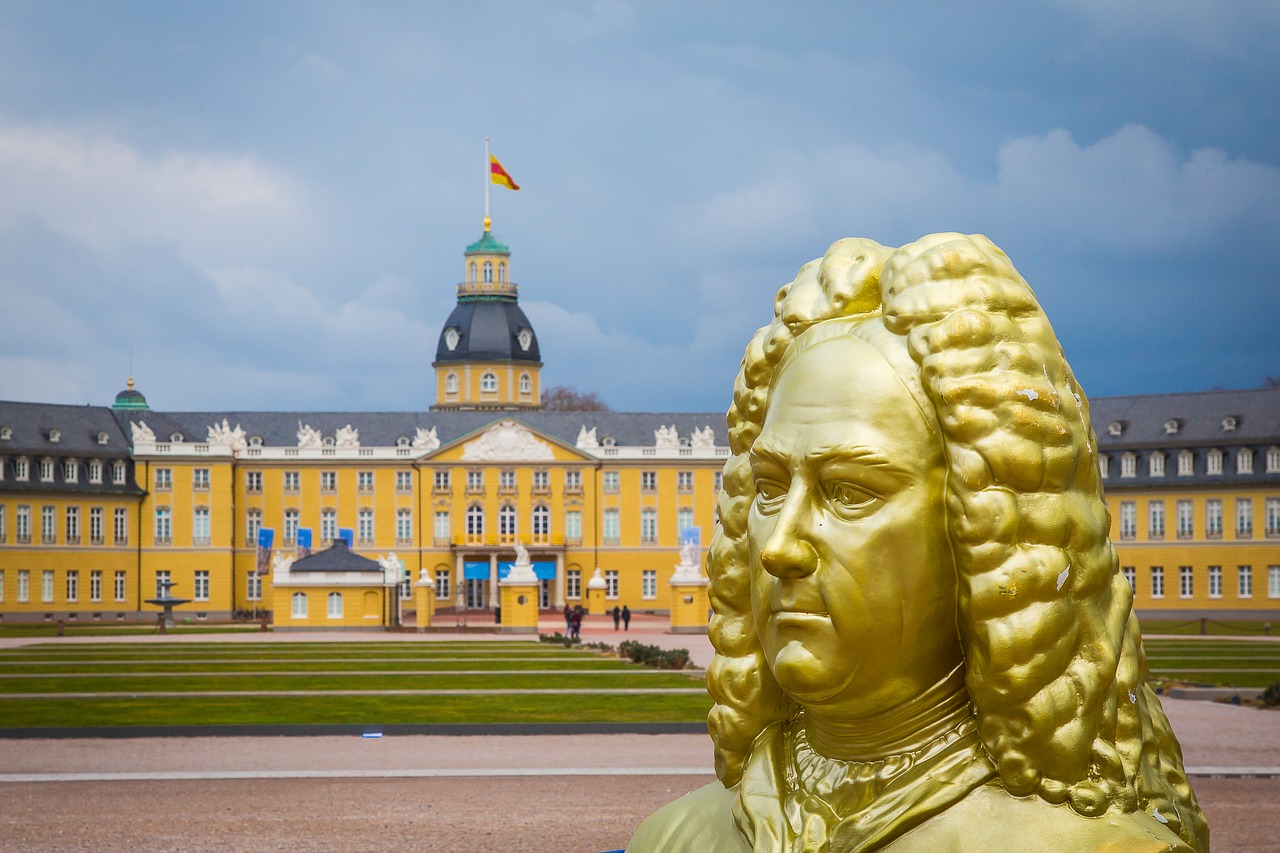 George Friderick Handel's music was popular and well-liked during his life time, and his influece has endured for centuries in the musical canon. On Ether Game this week, we showcased works by composers who borrowed from the Baroque master, and contemporaries who shaped Handel's style. Browse our playlist below to find out more.

Johannes Brahms (1833-1897) Variations and Fugue on a Theme by G. F. Handel in B-flat, Op. 24 After Robert Schumann’s death in 1856, Johannes Brahms and Clara Schumann went on a trip together to Switzerland. But as far as we can tell from their correspondence, their relationship was strictly platonic and professional, and maybe a little tense. As a well-known professional pianist at the time, Clara would often premiere Brahms’s works, including this set of Variations on Handel, which she premiered in Brahms’ hometown of Hamburg in December of 1861. Music historians often look to Brahms as the conservative figurehead of the Romantic Era. Unlike Wagner and Liszt, who used their compositions to probe mysterious and new philosophical approaches to music, Brahms tended to look backwards for inspiration, glorifying his favorite aspects of the Baroque and Classical eras. It’s no surprise then, that Handel would make an appearance in one of Brahms’s variations on a theme. He also composed works on themes by Haydn and Paganini.

Domenico Scarlatti (1685-1757) Sonata in d, K. 120 While his father Alessandro was closely associated with opera, the younger Scarlatti made his biggest mark with keyboard music, producing several hundreds of sonatas. His keyboard sonatas are almost instantly recognizable for their distinctive style, infused with the influence of the Iberian Peninsula (that’s Portugal and Spain). He often wrote in the Phrygian mode, and used tonal inflections that were previously unheard in most European art music. Scarlatti was a contemporary of Handel, having been born in the same year, and though he was considered the greatest Italian harpsichordist in his time, he was known to be very impressed with Handel’s skill. He and Handel had crossed paths in Rome for a friendly musical duel at the keyboard, arranged by the notable arts patron Cardinal Pietro Ottoboni. It is said that while Scarlatti was perhaps better at the harpsichord, Handel was superior at playing the organ. However the outcome of the duel, there was clearly no bad blood between them.

Felix Mendelssohn (1809-1847) Elijah, Op. 70: Selections When Felix Mendelssohn was 20 years old, he revived the 100-year-old work the St. Matthew’s Passion by Bach, prompting a 19th-century revival of the Baroque master all over Europe. Mendelssohn pored over the cantatas and passions of Bach, as well as the oratorios by Handel, and decided to write one of his own, which he titled Elijah. We often tie Mendelssohn directly to Bach because of the St. Matthew’s Passion performance, but he likely felt more in common with Handel. Bach was essentially an isolated composer in Germany during his own life, but Handel was considered a man of the world, well traveled and well versed in the many musical styles of Europe. This fits more with Mendelssohn’s own lifestyle, which was spent touring all over Europe. Mendelssohn performed, edited and even published numerous works by Handel, and quoted him not only in Elijah, but in several of his sacred choral works and his keyboard fugues.

Arnold Schoenberg (1874-1951) Concerto for String Quartet and Orchestra Though he is most well known for developing the atonal 12-tone technique of composition, and founding the Second Viennese School along with his students, the early music of Arnold Schoenberg follows pretty standard late-Romantic conventions. Many of these works show an influence of contemporary or early composers such as Wagner and Brahms. This selection, composed in 1933, is a free reworking of Handel’s Concerto Grosso. Although Handel  inspired the piece, Schoenberg’s opinion of his music is abundantly clear in the following quote, “I have had to get rid of whole handfuls of rosalias and sequences, replacing them with real substance. I also did my best to deal with the other main defect of the Handelian style, which is that the theme is always best when it first appears and grows steadily more insignificant and trivial in the course of the piece.” Tough words from a composer who would himself receive intense criticism for his music.

Percy Grainger (1882-1961) Handel in the Strand The self-proclaimed ninth best composer of all time, Percy Grainger lived a cosmopolitan life: born in Australia, studying in Germany, making a name for himself in England, and then working professionally in the United States. Grainger became widely known for his numerous inventive arrangements of mostly British folk songs, although he did write just as many original pieces as well. One of his early original works, Handel in the Strand, is also his most popular. Originally meant to be titled Clog Dance, Grainger changed the name at the recommendation of his friend and patron William Rathbone, to whom the piece is dedicated. Rathbone thought the piece reflected both Handel and British musical comedy, hence its reference to the Strand, the major thoroughfare which in the 19th century was home to more theatres and music halls than any other street in London.

Alessandro Scarlatti (1660-1725) Il Giardino di Rose We’ve already heard that Domenico Scarlatti met and dueled Handel; his father Alessandro might have been even more formative for what Handel would become ultimately famous for: the oratorio. Handel invented the English oratorio, a move that would not have been possible without the Italian oratorio, and Allesandro Scarlatti was the undisputed master of that musical genre, of which he wrote thirty-eight examples. The oratorio has been described as sacred opera without staging or theatrical elements, but that is an oversimplification. It is true that like opera, oratorios contain choruses, soloists, and orchestras, as well as recitatives and arias. However, they almost always rely on biblical subject matter, allegory or the lives of saints and martyrs. More subtly, oratorios are more straightforward in their storytelling than opera. Opera tends to relish overcomplication of plot lines as a part of the entertainment, while oratorios are meant to educate. This also affects pacing. With no stage work, recitative in oratorios are much shorter, thus arias come much closer together,

Louis Spohr (1784-1859) Symphony No. 6 in G, Op. 116 'Historical' Louis Spohr composed ten symphonies, spanning nearly five decades. You can get an idea of the immense stylistic shift in music he must’ve experienced when you reflect that both Mozart’s Marriage of Figaro and Wagner’s Tristan and Isolde were composed during Spohr’s lifetime. His 6th symphony, dubbed the “Historical Symphony” is meant to showcase the style of four different musical periods: The first movement encompasses Bach to Handel, the second represents Handel to Mozart, the third Beethoven, and the final movement reflects the then-contemporary French style of 1840. It’s thought that one inspiration for this symphony was a growing interest in historical performance, thanks to the work of Mendelssohn in promoting early composers, but it’s also more likely that Spohr meant to satirize contemporary French music by exposing it as noisy and vapid when compared to the subtle music of the past.

Johan Halvorsen (1864-1935) Passacaglia in g, from Handel's Keyboard Suite No. 7 Johan Halvorsen is not as well known outside his home country of Norway as Edvard Grieg (whose daughter Halvorsen married in the late 19th century), however he was an incredibly successful conductor, composer and violinist in his own right. Halvorsen’s most well known works are his Norwegian Rhapsodies and his duets based on themes by Handel, one of which we just listened to. Like Handel, much of Halvorsen’s professional life was spent in the theater. He was the full-time conductor at the National Theater of Kristiana (now Oslo), a position he held for 30 years. This duet exemplifies how much of a string virtuoso Halvorsen was himself. It is unusual to write concert music for violin and cello without the support of a piano or harp. Both instruments are thus required to support eachother with many difficult chords and double stops. Sometimes it sounds like there are as many as four or five voices, played by only two instruments.

Stéphane Grappelli (1908-1997) Mind, the Handel's Hot Stephane Grappelli is the father, no, really the grandfather of jazz violinists. Born in 1908 in Paris, Grappelli along with guitarist Django Reinhardt were jazz pioneers in Paris in the 1930s, creating their own brand of hot jazz, or gypsy jazz, or continental jazz… whatever you want to call it. Grappelli was influenced by jazz violinist Joe Venuti, who worked with Paul Whiteman in American in the 1920s. Grappelli heard Venuti on jukeboxes in Paris, and began to emulate his style. After achieving success, Grappelli worked with Arthur Young, the frontman of Hatchette’s Swingette in 1941, and recorded this baroque inspired toe-tapper, Mind, the Handel’s Hot. The melody is not directly quoted from Handel’s music, but you can hear the influence of his style. The violin and the clarinet both join in a Handelian fugue, and at the cadences both ornament with a very baroque-esque trill.  Stephane Grappelli continued to work all over the world, recording well into his 80s.