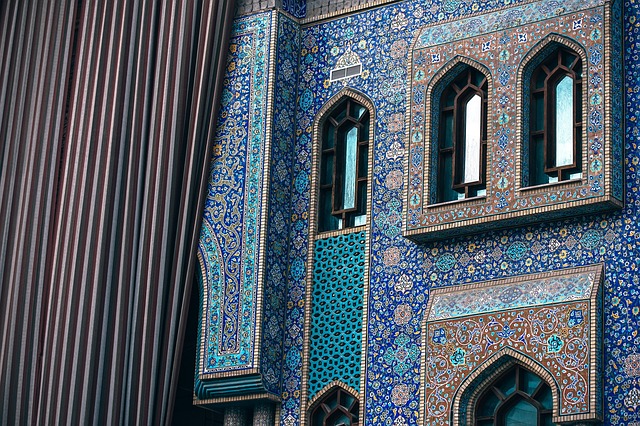 This week, the Ether Game Brain Trust bid players "As-Salaam-Alaikum" with a show about the Arab world and its influence on our music. Browse a selection of our favorites below.

Camille Saint-Saëns (1835-1921) Samson and Delilah, Op. 47: Bacchanale Camille Saint-Saëns’s opera Samson Et Dalila concerns the biblical superhero Samson, discussed in the Book of Judges. Samson was a Nazarite, a person who gains strength by worshipping God, abstaining from alcohol, and never cutting his hair. God rewarded Samson’s vow of devotion by turning him into the Arnold Schwarzenegger of the Bible. When Samson became infatuated with the beautiful Philistine temptress Delilah, she conspires with the Philistines to get Samson to reveal that the source of his strength is his long hair. Delilah tells the secret to the Philistines, who shave his head, blind him, and ultimately kill him. But not before Samson summons his strength once more to destroy the temple and all the Philistines within. We just listened to one of the most famous moments of the opera, the Bacchanale, in which the Philistines hold a huge party after having captured and imprisoned Samson.

Carl Maria von Weber (1786-1826) Abu Hassan: Overture In the eighteenth and nineteenth centuries, particularly in Vienna, there was a fad for all things Turkish. The location of Turkey on Austria-Hungary’s eastern border prompted a fashion for music imitating the style of Turkish military bands, called the alla turca style, or Janissary music in reference to the military rank of that name. This music emphasized quick, boxy rhythms in double time, and frequently used triangle and bass drum. The style was so popular, early fortepianos were sometimes made with drum and triangle attached, allowing a single player to imitate the sound of a Janissary band. Although at its best the alla turca style is imitative of one small aspect of middle eastern music, at the time that was all that was needed to evoke what was perceived to be the exotic East. Instances of the Turkish style are heard throughout Weber’s one-act singspiel Abu Hassan, based on a story from the Arabian Nights, and is especially prominent in this overture.

Philip Glass (b.1937) Akhnaten: Funeral of Amenhotep III The Metropolitan Opera kicked off its Live in HD 2019 theater series and radio broadcasts with an unusual and extraordinary opera: Akhnaten by Phillip Glass. The opera follows the rule of the ancient Egyptian pharaoh who attempts to reform Egypt towards a monothiestic religious society. Legendary designer Phelim McDermott returned to the Met for Akhnaten, presenting a show that incorporated acrobatics, bold colors and an intense physicality that had critics dubbing the premiere a major cultural event. The December HD broadcast also featured another major development for the Met, it was the first Live in HD opening broadcast to feature a female conductor and only the second time a woman has conducted an HD broadcast in the Met’s history. Karen Kamensek led the Metropolitan Opera Orchestra in Akhnaten until the final show on Dec 7. She also happens to hold music degrees from Indiana University’s Jacobs School of Music.

Gioacchino Rossini (1792-1868) Maometto II: Overture When Rossini completed his opera set during the Venetian-Ottoman conflict of 1470, you might have expected the work to premiere in Venice, where Rossini had found early operatic success. However, the Maometto Secondo had in fact been commissioned for the Teatro di San Carlo in Naples, and even then, the opera didn’t see its greatest popularity until it was performed in Paris, toward the end of Rossini’s career. The opera centers around a real-life middle-eastern figure, Mehmed II, and Ottoman Sultan who earned the title “Mehmed the Conqueror” for his capture of Constantinople. In 1451, he shored up the Ottoman navy and attacked what is now modern day Istanbul, taking the stronghold of the Byzintine Empire and effectively ending its reign. He was only 21 years old.

Lalo Schifrin (b. 1932) Symphonic Impressions of Oman: I. Prelude & Variations II. Divertimento This programmatic work carries all the indications of a composer with a deep understanding of symphonic composition. That being said, more than any of his classical works, Argentinian-American composer Lalo Schifrin’s most well known music is the theme to Mission Impossible. Symphonic Impressions of Oman is an eight movement homage to Oman, one of the oldest countries in the Arab world, whose music can be traced to Mesopotamia. In introducing the piece, Schifrin wrote that “This work is the result of my admiration for the country and its culture. A magical atmosphere which envelopes a fairytale landscape…” Working with Oman’s Ministry of Information, Schifrin gained access to some of the oldest music of the Islamic world, challenging himself to unify Oman’s folk music, with it’s short melodic phrases and complex rhythms, with his original material. The result is a work that brings together tradition and innovation, a musical testimony of the composer’s respect for both.

Joaquin Turina (1882-1949) Sevilla, Op. 2 Of the Spanish composers who have influenced Western classical music, some would categorize them roughly into two groups. Those who were inspired by Catalonian music, and those who came from Andalusia. Andalusian music is unique because of its connection to the Arab world. When the Iberian peninsula was occupied by the Moorish and Arab caliphates until the 15th century, Arabic music spread throughout the region and has remained a part of its musical heritage ever since. Sevillian composer and pianist Joaquin Turina set himself apart from other composers by not focusing on writing zarzuelas, the light musical dramas that most spanish composers at the time could make their living by writing, He instead wrote in more conventional European classical forms like quartets and genre pieces. Of the popular composers in his time he is the only one to ever write a symphony. Yet regardless of the form he still imbued his compositions with the characteristics of Andalusian music.

Ami Maayani (1936-2019) Triptique: 2. Maqamat Arabesque No. 1 Israeli composer Ami Mayaani studied violin, viola, conducting and composition in Jerusalem from 1951 to 53. However after returning from military service he became an architect and worked in the field for ten years while also obtaining a degree in philosophy. Despite these pursuits he considered himself a composer first and foremost, and became a notable music educator, founding three youth orchestras in Israel and becoming a professor at several music academies in Jerusalem and Tel-Aviv. He wrote music in many genres, combining elements of French impressionism with Arabic and Jewish roots music. Particularly favoring the harp, Mayaani wrote the solo piece “Maqamat” in the same kind of mode commonly heard in Arabic classical music. Called “maqams,” they are the melodic building blocks Arabic musicians use to improvise melodies, and are somewhat similar to the Indian raga.

Dia Succari (1938-2010) Au Palais du Temps Dia Succari was born in Syria in 1938, where he was taught by his father to play in Arabic maqams on the violin. However in the 1950’s he moved to Paris to study music composition under Olivier Messiaen where he received top prizes in harmony and counterpoint. He would continue to build a very successful career in composition and music pedagogy in France, and also returned to Syria to teach composition at the conservatory in Damas. His musical style fluidly combines French and Middle Eastern music which is demonstrated both in his art music as well as his extensive pedagogical repertoire for piano technique. While most of his music is written for Western classical instruments, he has composed for traditional arabic instruments as well.

Traditional Arabic Misirlou  It’s pretty hard to tell that we were listening to an arabic folk song, but underneath the feverish picking of Dick Dale, the King of the Surf Guitar, is a melody line that can be traced to Turkish, Greek and Egyptian musicians of the 1920s. The title, “Misirlou” translates to “Egyptian Woman,” and that is essentially all we know about the true origins of the tune. It has long been a favorite to accompany Turkish and Greek traditional line dancing, and was brought to America by Greek refugees fleeing the Turkish state in the late 19th century. Dick Dale recorded an instrumental rock version in 1962. He was challenged to play a song using only one string on his surf guitar, and choose Misirlou to beat the challenge, recalling the melody from a memory of his Lebonese grandfather playing it on the oud, a middle-eastern plucked instrument that is the ancestor of the Renaissance lute. Dick Dale’s version is responsible for the tune’s wide appeal, but the Beach Boys made it synonymous with American beach culture, when they included it on Surfin U.S.A.