Devil in the Details: A Faustian Ether Game Playlist 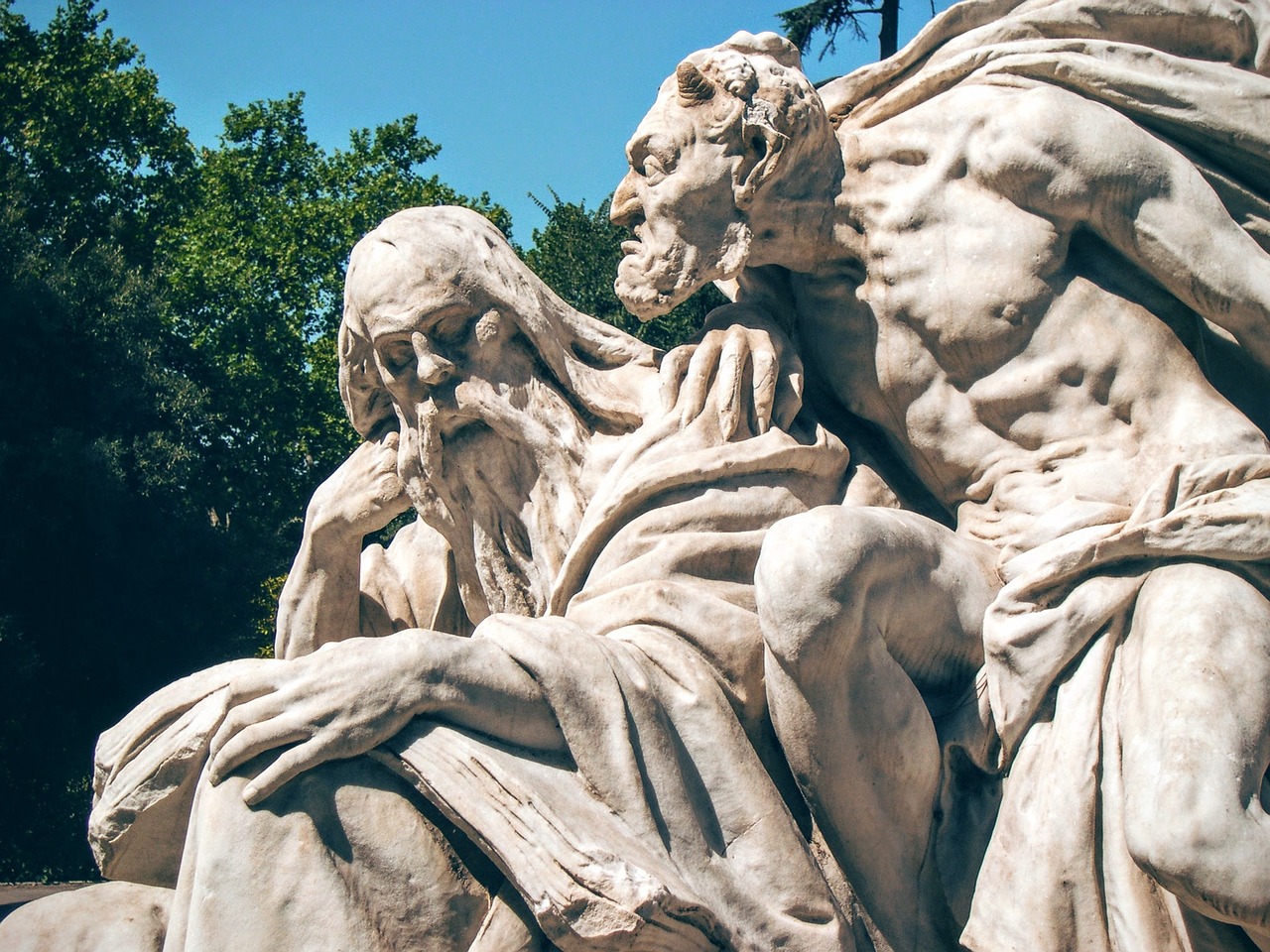 Mephistofeles joined the Ether Game Brain Trust this week, to help us put together a playlist of Faustian classical music. Listen below for selections from this week's Ether Game.

Charles Gounod (1818-1893) Faust: 'Air des bijoux' The legend of Dr. Faustus’ deal with the devil has inspired many literary and musical works since the 1500’s, the most famous being Goethe’s tragic plays Faust: Part One and Faust: Part Two. However it was not Goethe which inspired Charles-Francois Gounod’s five-act opera, but rather a retelling by Michel Carré titled Faust et Maguerite. Carré often collaborated with another playwright, Jules Barbier to produce many librettos including Faust, and together they helped define the aesthetic of French theatre in the 19th century. Gounod’s opera contains many popular themes and arias, the most well known being this one,  Ah! Je ris de me voir si belle en ce miroir. Arias are often titled after the first line being sung, however this piece came to be known as The Jewel Song, because in this scene the opera’s romantic interest Marguerite sings in rapture over a gift of jewels Faust is using to seduce her.

Franz Schubert (1797-1828) Gretchen am Spinnrade [Gretchen at the Spinning-Wheel], D. 118 “Gretchen” from Gretchen am Spinnrade is a character from Goethe’s version of the drama Faust, and in this scene that Schubert depicts, Gretchen is spinning yarn at her spinning wheel, and becoming increasingly distracted as she thinks about her love Faust. Really, Schubert creates two characters in his setting of the poem, the other being the spinning wheel. The twirling arpeggios of the right-hand of the piano mimics the repetitive turning and twisting of the wheel, while the left-hand’s steady thumping mimics its foot treadle. It’s a beautiful and dramatic setting, and the first setting of a Goethe poem that Schubert made. And considering that the composer was only seventeen years old when he wrote it, makes it all the more impressive.

Franz Liszt (1811-1886) Mephisto Polka In addition to the famous version of Faust by Goethe, there is also a popular version of the legend by Nikolaus Lenau, a younger contemporary of Goethe. It is this particular version that inspired Franz Liszt to compose the four Mephisto Waltzes and a polka based on a scene from Lenau’s novel. In Lenau’s version, Faust and the devil Mephistopheles walk into a local tavern where they see the beautiful girl Marguerite. Mephistopheles takes the fiddle from a drunken musician and plays a sultry and seductive waltz as Faust and Marguerite dance long into the night. Each of Liszt’s Mephisto dances is a different musical interpretation of the same story. The Mephisto Waltzes are particularly famous because they are among the first compositions to experiment with the concept of atonality, however the polka is considered milder by comparison.

Igor Stravinsky (1882-1971) The Rake's Progress: Part I In 1735, the art world was rocked with controversy over the publication of A Rake’s Progress, a series of eight paintings by the British artist William Hogarth. Each of the eight paintings in the series tell the story of a fictitious character named Tom Rakewell, the son of a wealthy merchant who comes to London, squanders his fortune on gambling and prostitution, and ultimately ends his days in the infamous Bedlam asylum. The story of this famous work later became the inspiration for Igor Stravinsky’s opera The Rake’s Progress. The opera is loosely based on the story in the Hogarth paintings with one major addition to the plot. Stravinsky and librettist W.H. Auden added the character of Nick Shadow, a mysterious man who leads Tom Rakewell to London and tempts him into his series of irresponsible adventures. It turns out that Nick Shadow is none other than the Devil, but Tom doesn’t realize this until it is too late.

Richard Adler (1921-2012) Damn Yankees: Heart Damn Yankees is a relatively modern retelling of the Faust legend. In it, real-estate salesman Joe Boyd makes a deal with the sly salesman Mr. Applegate, who is actually the devil, so that he can play baseball for the Washington Senators. The devil grants Joe his wish, making him the team’s new slugger that will help the Senator’s win the pennant. There is a catch, of course. He must leave his wife and original identity to become Joe Hardy, and the devil will get his soul if Joe remains on the team for their entire winning streak. The composer and lyricist duo Adler and Ross wrote Damn Yankees after the success of their 1954 musical The Pajama Game. Both musicals would remain long-running Broadway productions with many revivals.

Bernard Hermann (1911-1975) Music From the Devil and Daniel Webster Bernard Hermann composed dozens of scores over his very long career, most notably the scores to several of Alfred Hitchcock’s classic suspense movies. One of Hermann’s other popular works is his Academy Award-winning score to a 1941 film adaptation of Stephen Vincent Benet’s short story, The Devil and Daniel Webster. The story is set in 1841 and tells the tale of a farmer who’s down on his luck when he’s visited by a certain “Mr. Scratch.” Mr. Scratch (who’s actually the Devil in disguise) offers to give the farmer seven years of good luck in exchange for his soul, to which the farmer obliges. Seven years go by, but when the time comes for the farmer to pay up his end of the bargain, he calls upon the orator and lawyer Daniel Webster to argue his case with the Devil. Hermann’s film score was not the first time The Devil and Daniel Webster caught the attention of a composer. The short story had actually been adapted into a one-act musical by Douglass S. Moore two years before the release of the film.

Arrigo Boito (1842-1918) Prologue to Mefistofele: Instrumental Scherzo and Dramatic Intermezzo  The first performance of Boito’s Mefistofele was a fiasco for several reasons. Boito was inexperienced, and the libretto, which Boito wrote HIMSELF, was way too long.   On top of that, the cast was largely inadequate. The advance promotion of the work by Boito’s partisans and a few influential critics hoping for changes in conventional Italian opera antagonized a large sector of the conservative Milanese public and musical press. Only the “Prologue in Heaven” was well received, but that came early in a stormy evening that lasted until well after midnight. Boito thoroughly revised and shortened the work, which became more successful than the original version.

Ferruccio Busoni (1866-1924) Two Studies for 'Doktor Faust' Op. 51 After a period of study in Leipzig, Ferrucio Busoni took a teaching post at the Helsinki College of Music.  His circle of friends and students included a young composer named Jean Sibelius.  The group often met together in the cafes and restaurants of Helsinki, where they swapped ideas about art and other subjects.  Busoni didn’t remain in Finland long, and after winning the Rubinstein Prize for both piano and composition, he took another teaching position in Moscow.  Busoni was a fabulous pianist, and he was in constant demand on the concert stage. Preferring to consider himself primarily a composer, Busoni often made light of his skills as a pianist, and ill health forced him from the stage in 1922.  The completion of an opera entitled Doctor Faust became a goal he would never reach. He died in 1924, leaving two scenes incomplete.

Skip James (1902-1969) Hard Times Killing Floor Blues You might remember that we played music from the film Oh Brother Where Art Thou last month for our “On This Day” Ether Game, and while that film is remembered for its connection to Homer’s Odyssey, There is also a Faustian connection. For all of the fast pickin music featured in Oh Brother, one of the more intimate and mesmerizing musical moments is when New Orleans based guitarist Chris Thomas King performs a Skip James song called Hard Times Killing Floor Blues. King, (who plays a hitch-hiking guitarist named Tommy in the film) is picked up at a crossroads by the film’s main characters, informing them that he plays the guitar so well because he sold his soul to the devil. The character is loosely based on the real life early blues guitarist Robert Johnson, whose most famous songs recount how he sold his soul to the devil to achieve musical success.