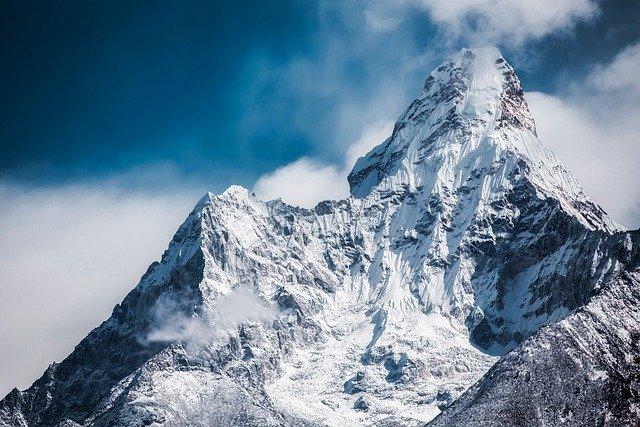 We’re setting out from Base Camp and ascending classical music’s most magnificent peaks. See how many composer-climbers you can name on this week’s mountainous Ether Game.

Mussorgsky, Modest (1839–1881) A NIGHT ON BALD MOUNTAIN The “Bald Mountain” referred to in the title of Mussorgsky's tone poem is the location of a legendary assembly of ghouls and witches, who celebrated a dark mass until they were dispelled by the ringing of a Matins bell. As with much of Mussorgsky’s music, the history of “Night on Bald Mountain” is complicated by multiple versions. The original title St. John's Eve on Bald Mountain refers to ST. JOHN’S EVE, or IVAN KUPALA EVE, a Russian folk holiday celebrated on the Summer Solstice. While the day itself is celebrated with ritual bathing and fire-jumping, in folklore the eve of the holiday often had more sinister associations. After his teacher rejected the original version in 1867, the persistent composer later worked a new version into a dream sequence in one of his comic operas. The most well-known version, however, is the one edited and performed after Mussorgsky’s death by his friend Nikolai Rimsky-Korsakov.

Strauss, Richard (1864–1949) EINE ALPENSINFONIE: Strauss’s epic tone poem An Alpine Symphony—the last he ever wrote—took its inspiration from a real-life event in the composer’s life. In his youth, Strauss partook in an especially rough mountain-climbing expedition, where the party lost their way, and were pummeled by a nasty thunderstorm during the descent. These events, from the ascent to the thunderstorm, are all musically depicted in the work. Strauss initially drafted some Alpine-inspired sketches much earlier, and only compiled them into the Alpine Symphony after reading the work of FRIEDRICH NIETZSCHE. Nietzsche’s discussions of liberation through personal strength and the worship of nature in the philosophical novel The Antichrist convinced Strauss to revisit his music about the majestic Alps. In fact, Strauss originally intended to call this work The Antichrist, but later abandoned its philosophical overtones for something more natural.

Monteverdi, Claudio (1567–1643) FIFTH BOOK OF MADRIGALS: Ma tu, più che mai There’s nothing particularly “mountainous” about the songs of Monteverdi’s Fifth Book Of Madrigals, unless you consider this work as an early ascent towards the future of tonality (which many historians do). Rather, the name “Monteverdi” literally translates in Italian to “Green Mountain.” There’s, in fact, an early music ensemble in Vermont who’ve had a little fun with that name, calling themselves the “Green Mountain Monteverdi Ensemble of Vermont” (the word Vermont, by the way, also translates to “Green Mountain,” but in French). Monteverdi isn’t the only composer with a mountainous last name, either. 20th century composer ALBAN BERG is the obvious one (“Berg” means “mountain” in German), and same goes for his teacher ARNOLD SCHOENBERG, whose name means “beautiful mountain.”). Another is VITTORIO MONTI (“mountains,” in Italian), a violinist known for his gypsy piece Czárdás. I’m sure there are many lesser known Bergs and Monts out there as well.

Wagner, Richard (1813–1883) TANNHÄUSER: Overture In Richard Wagner’s opera Tannhäuser, history and myth are blended together through the filter of nineteenth-century German nationalism. The story is of the titular master singer who returns to the historic castle of The Wartberg to participate in the famed singing competition, only to find that he has been damned by his erotic sojourn in the grotto of VENUS. In German mythology, Venus's underground kingdom is situated between Gotha and Eisenach, in a giant mountain called the Venusberg, When even the Pope can’t help Tannhauser, his soul is ransomed by the life and love of the pure Elizabeth. Real characters populate Wagner’s opera: the poets Wolfram von Eschenbach and Walther von der Vogelweide supposedly participated in the contest at the Wartburg. Also, a real Elizabeth resided there, and was later canonized as a saint. The historical Tannhäuser, however, probably had no connection to the competition.

Hovhaness, Alan (1911–2000) SYMPHONY NO. 2 "MYSTERIOUS MOUNTAIN": I. Andante con moto Alan Hovhaness loved mountains. He said that they are “symbols, like pyramids, of man’s attempt to know God.” His list of works includes many mountain pieces, including Farewell to the Mountains, Mountain Idylls, October Mountain, Mountain Dances, Mountain of Prophecy, Three Journeys to a Holy Mountain, and about 20 others. He received the commission to write his Second Symphony, subtitled “Mysterious Mountain,” after the conductor LEOPOLD STOKOWSKI gave a wildly successful premier of the composer’s First Symphony. Written for Stokowski’s opening concert with the Houston Symphony, the beauty of the Second Symphony seemed no mystery to the audience, and it received glowing reviews. Its descriptive subtitle was added after its composition, but it fit perfectly with Hovhaness’ fascination with the mystical qualities of sound and his love for those massive marvels of nature.

Liszt, Franz (1811–1886) CE QU'ON ENTEND SUR LA MONTAGNE: Symphonic Poem No. 1 "Mountain Symphony" The symphonic poem (or tone poem) was more or less an invention of Franz Liszt. There are predecessors for sure, like the concert overture, but as tastes and artistic changed, Liszt needed a new art form. In his words: “new wine demands new bottles.” He wrote 13 symphonic poems in all, single movement orchestral works based on a poem or program. His very first symphonic poem, begun in 1830, was inspired by a poem by French author VICTOR HUGO titled Ce qu’on entend sur la montagne, or “What Can Be Heard On The Mountain,” and has since been dubbed the “Mountain Symphony.” The poem is no simple poem about nature, but rather a philosophical poem about the contrast and confusion between the voice of Nature and the voice of Mankind. Heady stuff... no wonder it’s Liszt’s longest symphonic poem, clocking in at nearly a half hour in length.

Messiaen, Olivier (1908–1992) FROM THE CANYONS TO THE STARS...: As a composer who experienced sound-color synaesthesia, the association of certain colors with different sounds, it is perhaps not surprising that Messiaen would choose Utah's red and orange Bryce Canyon as the inspiration for his symphonic suite From the Canyons to the Stars. The piece was commissioned in 1971 by opera singer and philanthropist ALICE TULLY for the upcoming American Bicentennial. After seeing photographs in a book he owned titled “Wonders of the World,” Messiaen made a special pilgrimage to Bryce Canyon, where he spent a month finding musical inspiration in the colors, landscape, and birds from the area. In 1978, the citizens of Parowan, Utah were so impressed with his work, they named a local mountain after him. Mt. Messiaen is now a hiking destination in Utah. A plaque on its southern rock face honors the French composer and thanks him for his musical contribution.

Auber, Daniel François Esprit (1782–1871) LA MUETTE DE PORTICI: Overture Daniel-Francois-Esprit Auber is remembered as the father of French Grand Opera. His opera La Muette De Portici was a massive undertaking, incorporating complicated stage machinery to create an on-stage volcanic eruption of Mount Vesuvius in the final act, as well as the largest orchestra yet to be seen in a French opera house. Though his production pushed the spectacle of French opera, the vast resources required to stage it made performances rare. During early performances of the opera in Brussels however, riots broke out that dwarfed the uproar caused by Stravinsky's Rite of Spring. The opera is set during a revolution in the 17th century, which resonated with the audience in Belgium, who were trying to gain their own independence from the Netherlands. At the premiere, a riot broke out, one riot led to another, and eventually the Belgian Revolution was in full swing.

Nickolas Ashford and Valerie Simpson AIN'T NO MOUNTAIN HIGH ENOUGH Although Marvin Gaye had quite a career as a solo artist—including hits like “Ain’t That Peculiar,” “I Heard It Through The Grapevine,” and “What’s Going On”—pairing him with a female singer was always a sure bet. He recorded successful duet albums with Mary Wells, Kim Weston, and even Diana Ross, although his brief partnership with singer Tammi Terrell produced such mega hits as “Ain’t Nothing Like The Real Thing,” “You’re All I Need To Get By,” and “Ain’t No Mountain High Enough.” Most of Gaye and Terrell’s biggest duet hits were written by the songwriting team of Nick Ashford and Valerie Simpson, better known as ASHFORD & SIMPSON. Ashford & Simpson proved to be such a lucrative pair as songwriters, that they emerged from behind the curtain, and started performing their own songs in the 1970s and 80s.