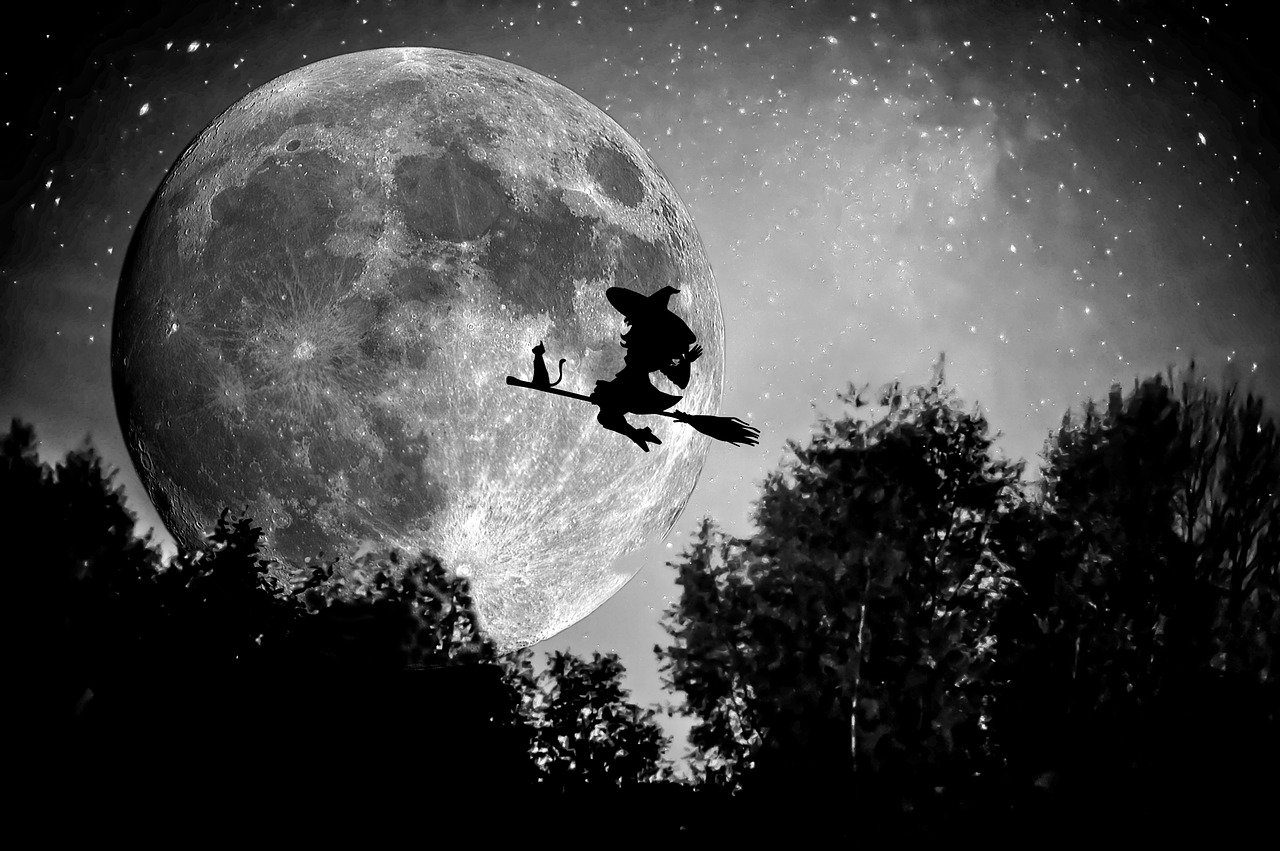 The Ether Game Brain Trust had a spell cast over it this week, and could only play music about witches! From Baba Yaga to the Witch of Endor, to Medea and many others, these mysterious, magical figures have appeared often in programmatic music. Browse our playlist below for our favorites.

Hector Berlioz (1803-1869) Symphonie Fantastique, Op. 14: The Witches' Sabbath One of the most nightmarish scenes in all of classical music, the “Dream of the Witches’ Sabbath” is the concluding movement of Hector Berlioz’s utterly fantastical Symphonie Fantastique. In the program for the work, the protagonist (the “artist”) has been struck with a nasty case of unrequited love. His idée fixe haunts him so profoundly that he attempts to poison himself with OPIUM. In his opium-induced nightmare, the artist dreams that he has been sent to the scaffold for his lover’s murder. When the guillotine comes down, he finds himself in hell at a witches’ sabbath, surrounded by all sorts of ghouls and monsters. Worst of all, his beloved shows up as one of the witches, dancing in delight at his hellish funeral. The work was inspired by Berlioz’s own unrequited love for the Irish actress Harriet Smithson, as well as his own experiments with opium.

George Frideric Handel (1685-1759) Teseo, HWV 9, Act 5 Scene 1: No. 33, Aria, "Moriro, ma vendicata" An operatic genre that has waned greatly in popularity since the 19th century is the Pastiche, a musical work that imitates a style of the past, often borrowing popular and characteristic songs of that era to celebrate, rather than parody, the music of old masters. The Metropolitan Opera attempted a large-scale rebirth of the genre with a Baroque Pastiche in 2011 titled The Enchanted Island. The plot follows the lovers from Shakespear’s A Midsummer Night’s Dream, but has them shipwreck on Prospero’s magical island in The Tempest, where Prospero is feuding with Sycorax, the witch who rules and lurks on the dark, mysterious side of the island. The music for The Enchanted Island is borrowed from obscure operas by Baroque masters, including this aria from Handel’s Teseo (sung in our story by Sycorax). Works by Vivaldi, Rameau and Purcell also feature heavily.

Antonín Dvorák (1841-1904) Rusalka: Act 1. "Your ancient wisdom knows everything" When Dvorak first saw the libretto for Rusalka, he took immediate interest in it, and finished the opera fairly quickly. The libretto draws on several literary sources to tell the story of Rusalka, a water-nymph who falls in love with a handsome human Prince. In Act 1, Rusalka sets out to visit a witch who knows a spell that can turn Rusalka into a human. The witch is named Jezibaba, the Czech name for the most famous which is slavic folklore: Baba Yaga. Baba Yaga is no stranger to classical music, appearing also in works by Mussorgsky, Lyadov and Tchaikovsky.  We just listened to our Rusalka’s meeting with Jezibaba. Right before this scene, Rusalka sings some of the most famous music from the opera, her Silver Moon aria.

Englebert Humperdinck (1854-1921) Hansel and Gretel: Prelude to Act. II: The Witch's Ride Traditionally, the titular roles of Humperdinck's Hansel und Gretel are performed by two adult mezzo-sopranos. However, when Humperdinck first began composing music for the opera, it was with much younger singers in mind. In April 1890, Humperdinck’s sister gave him four songs from Grimm’s fairy tale Hänsel und Gretel, and asked the composer to provide music for them for her children to sing. Humperdinck was looking for a libretto for a comic opera, and expanded the songs into a Singspiel. The role of the Gingerbread Witch is also traditionally sung by a mezzo-soprano, but in a beautiful production staged at the Met in 2008, the role was given to a male tenor, making the witch more whimsical, but also more creepy and predatory. Since that production, the Met has continued to stage a Christmas production of Hansel and Gretel, with the role of the witch sung by a tenor.

Felix Mendelssohn (1809-1847) Twelve Songs, OP. 8: No. 8, Hexenlied  Mendelssohn composed and published his Twelve Songs for voice and piano between 1824 and 1828, when he was only fifteen years old . Notably, the second song, titled Homesickness, was actually written by his sister Fanny, bought the Mendelssohn status as an upper class family made it impossible for a woman to publish under her own name at the time. Another trick presents itself in the collection: No. 8, the Hexenlied or Witch’s Song, begins as a typical Maying song, celebrating the beauties of Spring. By verse two however, the song takes a dark turn, describing a spooky witch’s ritual. The lyrics describe how the coven dances for Beelzebub, a dragon appears, and the whole ghostly throng goes flying into the air on their broomsticks.

Granville Bantock (1868-1946) The Witch of Atlas In the early twentieth century, Granville Bantock was well known as a composer, conductor, writer and teacher.  He was the son of a doctor and educated to serve in the Indian civil service.  Bantock became a student at the Royal Academy of Music when he was twenty, and was fond of the music of Wagner and Richard Strauss.  Generous towards his fellow composers, he was able to spot genius in others, and was one of the first to encourage Sibelius, who became his lifelong friend.  Although he was a prolific composer, his predilection for large-scale works, along with his interest in eastern subjects proved a bit of a handicap when it came to securing a performance.  Nevertheless, Granville Bantock had a long and productive life, dying at the age of seventy-eight.

Carl Nielsen (1865-1931) Saul and David, Act IV: Who is Knocking? Although the Danish composer Carl Nielsen is known for the breadth of his work, he only composed two operas. The first of these, Saul and David centers on the biblical story of King Saul and the shepherd musician David. Adapted from the Book of Samuel with a libretto by Einar Christiansen, the opera focuses on Saul’s growing jealousy of David after David becomes politically popular for defeating Goliath. In the final fourth act of the opera, Saul visits the Witch of Endor to bring the prophet Samuel’s spirit back from the dead, in order to seek wisdom against fighting the Philistines. The future looks bleak for Saul as Samuel’s ghost predicts death for all of his sons. Sure enough, they are all killed in battle before the day is out, and Saul throws himself on his sword in despair. David is proclaimed as the new king.

Stanley Myers (1930-1993) Suite from The Witches (1990 reonstruction) In Roald Dahls’ children’s novel The Witches, our protagonist’s grandmother, who is a retired witch hunter, explains that real witches are vicious secretive creatures who disguise themselves in order to prey on children with dark magic. While they may look like an ordinary woman, there is a small list of ways to recognize a real witch. Real witches always wear gloves to hide their claws, always wear wigs because they are bald, always wear pointed shoes because they have square feet with no toes, have eyes that change color and spit blue ink. They also have large nostrils for sniffing out children. Stanley Myers provided the score for the 1990 film adaptation of The Witches, which performed poorly on release but has since become a cult classic. It was just given a new film adaptation this October, starring Anne Hathaway as the Grand High Witch.

Donovan Phillips Leitch (b. 1946) Season of the Witch When his third album Sunshine Superman was released in 1967, Scottish folk-rock singer Donovan was starting to incorporate an eclectic blend of styles from jazz, blues and world music, bringing his brand of folk music further into the realm of psychedelic pop, to the chagrin of some purists who preferred the striped down, acoustic guitar driven ballads of his previous album Fairy Tale. This track, Season of the Witch incorporated a large line-up of session musicians to create a headier, hazier backdrop for Donovan’s wailing vocals, as he swaps his acoustic guitar for a Fender Telecaster Electric. Many of Donovan’s songs have become standard rock repertoire, and Season of the Witch is no exception, with Dr. John, Joan Jett, Lana del Ray and many others all having released their own covers.