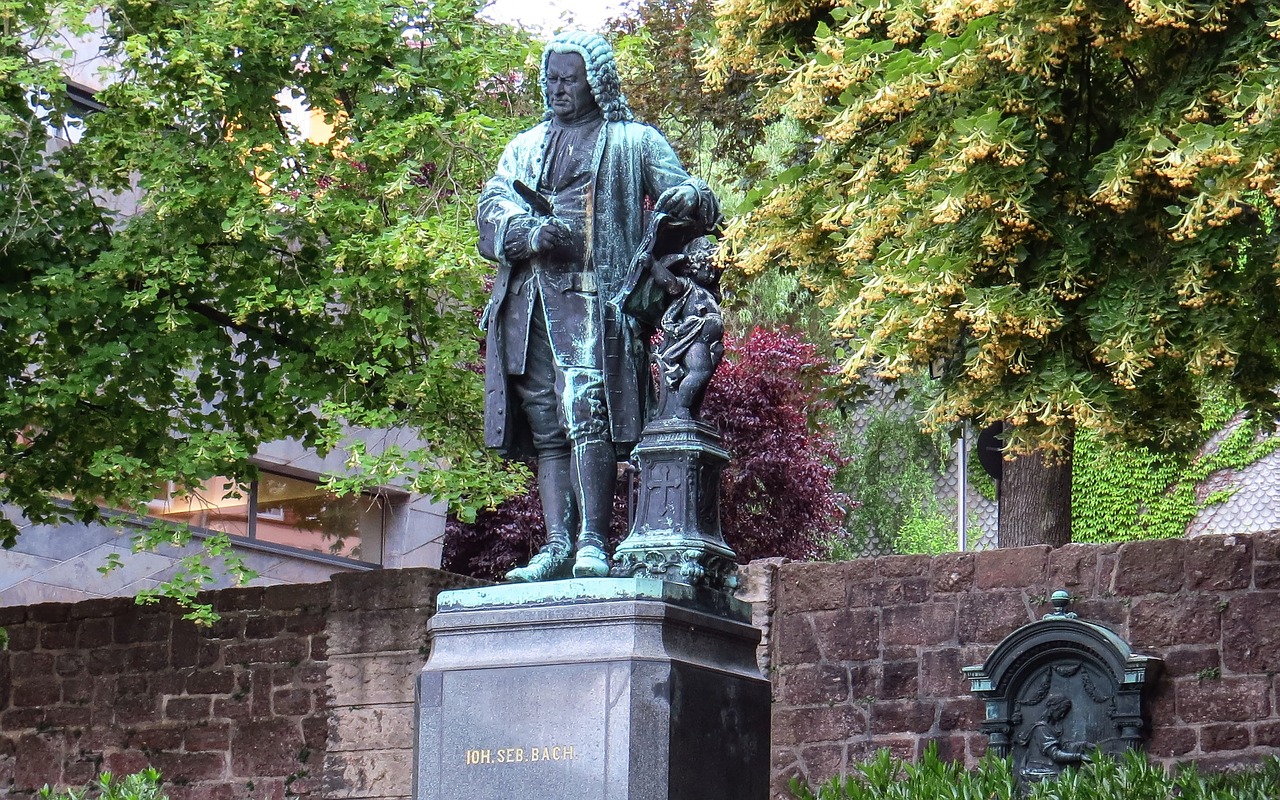 This week, we spent hours lighting three hundred and thirty five birthday cake candles, for the OG organ improviser, the man with the powdered wig and the giant musical family, Johann Sebastian Bach. We're celebrating his 335th birthday with a show all about his influence on other composers, a show called Back to Bach. We've got your Bach with our playlist below:

Wolfgang Amadeus Mozart (1756-1791) The Magic Flute: Act II, "Der, welcher wandert diese Strasse voll Beschwerden" The Enlightenment is regarded by many as a time when new ideas and new philosophies about life began to redefine European culture. Numerous groups popped up all over Europe where intelligent men could meet and discuss the ups and downs of society. One of these groups that is still in existence today is the Freemasons, and one of its most famous members was Wolfgang Amadeus Mozart. His last opera, The Magic Flute, is filled with Masonic symbolism and even includes an initiation ceremony that is similar to the one that new inductees experience when joining this elite secret society. In Act 2, scene 7, Prince Tamino and Princess Pamina face the final trial of the Brotherhood of Wisdom, requiring them to pass unscathed through chambers of fire and water. Mozart wrote this duet by the trial guards in the style of Bach to give the scene a sense of gravitas and antiquity. The musical accompaniment is reminiscent of one of Bach’s chorale preludes, and the tune is even taken from a Lutheran hymn.

Carl Philipp Emanuel Bach (1714-1788) Flute Sonata in G, H. 564, Wq. 133 'Hamburger'  Of all of J.S Bach’s children, his second eldest son was the most successful at maintaining his legacy. Carl Philip Emmanuel Bach became a highly accomplished performer and composer in his own right, and likely enjoyed more popularity in his own time than his father. The “Hamburger” Sonata in G major was his last work for flute, written at a time when Bach had left Berlin for Hamburg and was beginning to retire from more demanding musical obligations, such as his appointment as court harpsichordist to Frederick the Great. It was during this time that Bach was treated to a performance by the blind flute virtuoso Ludwig Dulon, who played some of Bach’s own compositions and inspired him to compose this sonata. The transverse flute had been enjoying increased popularity thanks to technical improvements developed by Frederick the Great’s flute teacher, Johann Quantz and Bach’s flute compositions were shared widely among his admirers.

Felix Mendelssohn (1809-1847) Elijah, Op. 70 Introduction Felix Mendelssohn was already famous around Europe when he made the bold decision to revive the music of the past. When he was 20 years old, he conducted the 100-year-old work the St. Matthew’s Passion by J. S. Bach. This event prompted a 19th-century revival of the Baroque master all over Europe. Mendelssohn pored over the cantatas and passions of Bach, as well as the oratorios by Handel, and decided to write one of his own. Like the oratorios of Bach and Handel, Mendelssohn went to biblical sources. His first oratorio was St. Paul, based on the Acts of the Apostles, and his second was Elijah, based on the Old Testament prophet. Mendelssohn wrote both English and German versions of the oratorio, and like Handel’s Messiah, the work premiered in the UK in English. It was a resounding success, cementing Mendelssohn legacy as the reviver of past styles.

Franz Liszt (1811-1886) Prelude and Fugue on the name B-A-C-H Many composers have given musical nods to J.S. Bach with the“Bach Motive,” a series of four notes that represent Bach’s name. Composers often ascribe identifiable motives or melodies to themselves as musical signatures. Bach was lucky in that his own last name directly translated to musical notes, and he used the subsequent motif often in his basslines. The motive consists of the notes B-flat, A, C, and B natural. You might think that doesn’t exactly spell “Bach,” but in German music theory the letter “B” is assigned to the note B-flat, while “H” is assigned to B naturally.  This distinction is an artifact of the modal theory that was used by medieval and Renaissance composers. This little angular melody has appeared in many pieces throughout history, including works by Telemann, Schumann, Brahms, Schoenberg, Webern, and in this keyboard piece by Franz Liszt.

Peter Schickele (b.1935) [P.D.Q. Bach] The Short-Tempered Clavier, Preludes and Fugues in all the Major and Minor Keys Except for the Really Hard Ones, S. easy as 3.14159265 While J.S., C.P.E., J.C. and W.F.E. Bach all brought honor to the Bach family name, P.D.Q. Bach only brought disgrace with his many musical assaults. P.D.Q. Bach, of course, was not a real son of Johann Sebastian Bach, but an alter ego of musicologist and composer Peter Schickele, as well as an outlet for Schickele’s particular brand of musical wit. P.D.Q. Bach’s style can only be described as absurd, lampooning everything from the music of the paterfamilias himself, to the works of Tchaikovsky, Glass, Rossini, and Wagner. The movements we just listened to are some of Schikele’s early work, and a direct reference to J.S. Bach, taking their form from Bach’s The Well-Tempered Clavier. The music from this collection incorporates classic Schickele style: quoting trite folk tunes and pop songs and bending them into a classical style.

Francis Poulenc (1899-1963) Organ Concerto Winnaretta Singer, the American-born heir to the Singer sewing machine company and its massive fortune, became the Princess Edmond de Polignac through her second marriage in 1893. Using her wealth and position, she became a prominent patron of the arts and surrounded herself with notable Parisian composers, artists and writers. Debussy, Ravel and Fauré performed in her salon, and she embraced the avant-garde by commissioning pieces by Stravinsky, Satie and Milhaud. Of the two commissions given by her to Poulenc, the Organ Concerto is his most dramatic. Originally intended to be a much lighter piece accompanied by chamber orchestra with an easy organ part for the Princess to perform, the nature of the piece changed after Poulenc returned from religious pilgrimage and rediscovered his catholic faith. He became very interested in religious music and decided to study Bach before finishing this piece, having never written for organ previously.

Heitor Villa-Lobos (1887-1959) Bachianas Brasileiras No. 5, Aria A modernist movement was well underway in 1930’s Brazil, and Heitor Villa-Lobos sought to create a new national identity by combining the tropical rhythms and popular dance forms of his home country with Western music conventions. Villa-Lobos described Bach as a “universal folkloric source, rich and profound, linking all peoples,” and his nine Bachianas brasilieras were written as an homage to the composer. However the bachianas are less stylistic renditions of Bach but rather free adaptations of baroque counterpoint and harmonic techniques merged with popular Brazilian music. Each Bachiana is a dance suite as in the baroque style, but alongside fantasias, arias and fugues, Villa-Lobos has included embolada, choro, and modinha. (mojinya) Each piece features unique combinations of instruments such as solo guitar, eight cellos, or flute with bassoon.

Alfred Schnittke (1934-1998) Suite in the Old Style, Fugue and Pantomime Alfred Schnittke was born in 1934 in Engles on the Volga River in the former Soviet Union.  He completed his studies in composition at the Moscow Conservatory in 1961 and joined the Union of Composers the same year, supporting himself by writing primarily film scores, completing the scores for more than sixty films by 1984.  Schnittke is best known for an idiom he developed which has come to be known as “polystylism” in which Schnittke incorporated a wide range of genres and styles. Several of his most famous works, such as the Concerto Grosso No.1, written in 1977, combine many styles within one piece, while still others, such as the Suite in the Old Style that we just heard, are written deceptively completely within an older style, especially the Baroque music of J/ S Bach, despite the occasional slips into a more modernist idiom.  Schnittke’s work, more or less unknown before the early 80’s, has since become very popular with numerous performances and recordings to his credit.

Gary Brooker, Keith Reid and Matthew Fisher A Whiter Shade of Pale Some have called it “baroque pop,” “chamber pop,” or even “bar-rock n’ roll” but pop and rock music has engaged with classical music as often as it rejects it.The British rock band Procol Harum made their debut with the release of this single “A Whiter Shade of Pale..” The song was an immediate success and became an unofficial anthem for the Summer of Love in 1967. As flower children gathered in the streets of Haight-Ashbury, a strain of Bach’s “Air on a G String” played on a could be heard from many radios and record players. While the reference to Bach’s air in the hammond organ opening is obvious, listeners have also found other snippets of Bach melodies throughout the song from his cantatas and chorales. Whether intentional or not, the mixing of classical and rock foretells of  Progressive rock music that would become popular in the decades to come.