All the Best, Pops! 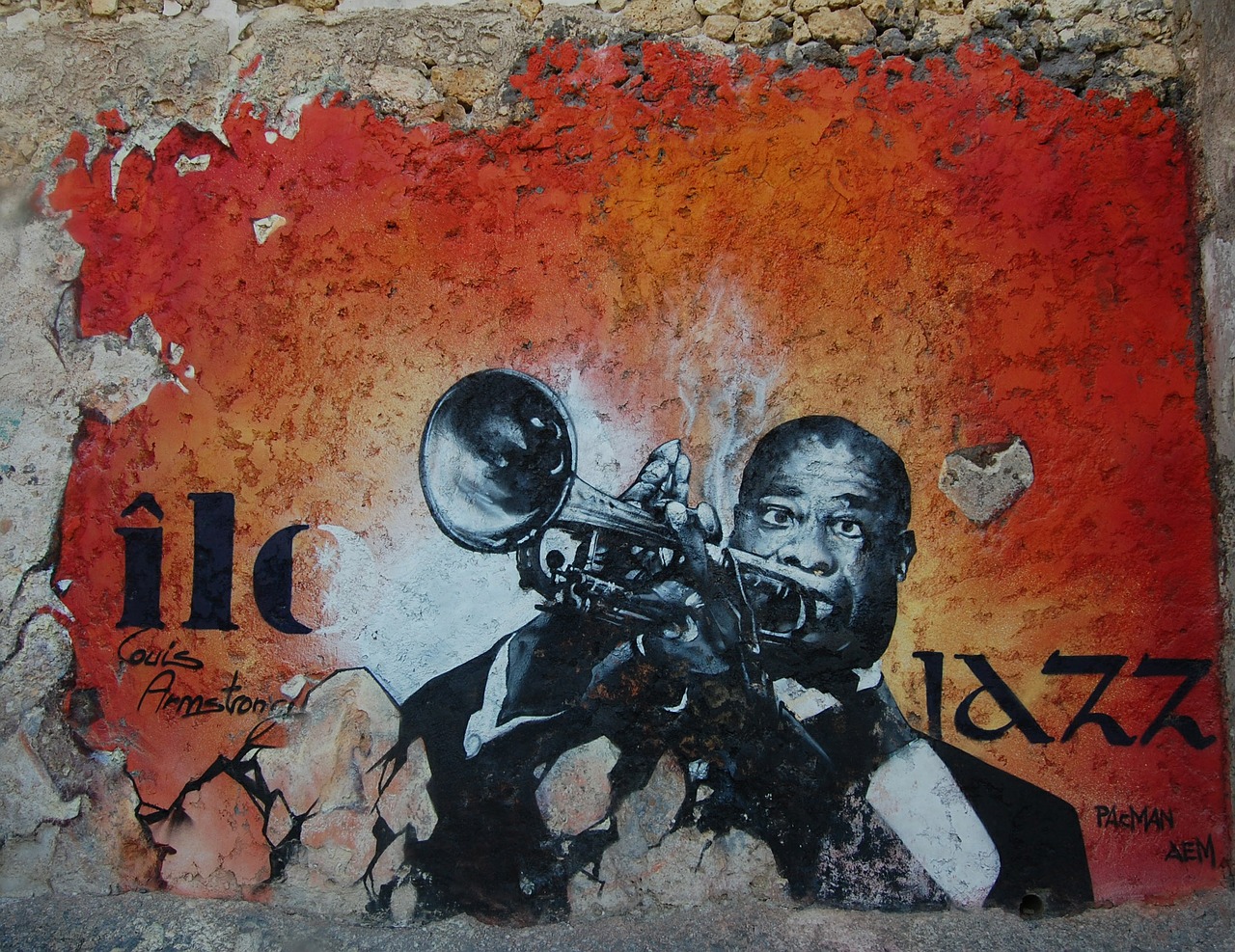 On this Tuesday in 1901, Louis Armstrong was born in New Orleans. Over the course of a career that spanned half a century, He became one of the most influential musicians in American music history. For Ether Game this week, the Brain Trust created a playlist of classical music under the influence of jazz.

Jerry Herman (1931-2019) Hello Dolly! Overture Though he started playing the piano at age 6, Jerry Herman set off to study design after graduating high school in New Jersey. He quickly switched his major to drama and enrolled at the University of Miami after Broadway songwriter Frank Loesser encouraged him to continue composing. With a degree from one of the nation's most avant garde theater departments, Herman moved to New York city in 1954 and earned his living playing piano in nightclubs. He also began writing music for off-Broadway shows and revues, and six years later he premiered his first Broadway musical Milk And Honey. Not long after, he composed his most successful Broadway musical, Hello Dolly. Louis Armstrong was asked to make a demo recording of the musical's title song to promote the production. However, when it was released commercially in 1964 as a single, it went straight to the top of the charts, even displacing the Beatles. It remained at the top for six weeks, and Louis Armstrong, who was 63 at the time, became the oldest musician to make this achievement.

George Gershwin (1898-1937) Fantasy for Violin and Orchestra on 'Porgy and Bess' The idea of composing an opera based on DuBose Heyward's novel Porgy about life among the black inhabitants of â€˜Catfish Row' in Charleston, South Carolina, first occurred to Gershwin in 1926. After many delays, Heyward and the Gershwin brothers signed a contract in October 1933 with the Theatre Guild in New York, and the collaboration was under way. While Gershwin composed the score in 1934, he stayed in South Carolina absorbing local color. By early 1935, the composition was finished. Billed as â€˜an American folk opera', Porgy and Bess opened in New York in October 1935 in a Broadway theatre. It ran for 124 performances, not even enough to recover the original investment. In 1959, Louis Armstrong collaborated with Ella Fitzgerald on a recording of selections from Porgy and Bess. The album is now considered to be the most successful jazz vocal version of the opera.

Igor Stravinsky (1881-1971) Piano Rag Music When musicologists talk about Stravinsky's most famous pieces, they often point to his love of primitivism and neoclassical techniques. By the Roaring Twenties however, like many people in America and Europe, he was becoming interested in jazz. In 1919 when Stravinsky completed his Piano Rag Music, he had managed to hear live jazz for the first time from one of the many jazz combos touring Europe. Before this, Stravinsky had only seen jazz scores, mostly sheet music by Scott Joplin, and attempted (with mixed success) to compose some ragtime for his drama A Soldier's Tale. Having finally heard jazz in 1919, his fusion of genres is more clear in Piano Rag Music. Stravinsky does not directly lift ragtime style for his composition, instead he inserts harmonic and rhythmic fragments of the genre throughout the piece, and combines them with more familiar territory: ostinato phrases, bitonality, changing keys and meters. The work almost sounds like it's being made up on the spot, which also gives it the character of jazz improvisation.

Aaron Copland (1900-1990) Music for the Theatre: Burlesque Copland's name is now synonymous with "the American sound" in classical music, but it took years of experimentation for him to earn that association, and his music was not always so well received. Early in his career, Copland caused a scandal when he brought the jazz idioms of the Roaring Twenties into the classical concert hall with his work Music for the Theater. With its catchy melodies and energetic rhythms, the last movement before the Epilogue, called The Burlesque, is particularly evocative of a raunchy brand of swing music that was wildly popular in nightclubs of the time. Copland did not have a particular show in mind when he wrote the piece however, stating that "the music seemed to suggest a certain theatrical atmosphere, so after developing the idea into five short movements, I chose the title."

Darius Milhaud (1892-1974) La CrÃ©ation du monde [The Creation of the World], Op. 81 Another member of the French avant-garde music collective Les Six, which we covered in our Bastille Day game, Darius Milhaud was inspired by trips to London and Harlem in 1922 to write his ballet. The music for La CrÃ©ation du Monde blends both classical and jazz elements. Based on the book by Blaise Cendrars, which tells the story of creation from the African tradition, Milhaud's title refers to the compilation of five African creation stories that comprise the work. The music is scored for an unusual cross between chamber orchestra and jazz band in which the saxophone plays a very prominent part, replacing the viola as part of the string section. Although the ballet wasn't very well received upon its premiere in October of 1923, it has since become one of Milhaud's most popular works. Although often compared to Gershwin's Rhapsody in Blue, Milhaud's work predates the Gershwin classic by a year. Over his lifetime, Milhaud finished over 400 works. One explanation for his extraordinary output may be the fact that he derived the greatest pleasure from "creating something new at every moment of the day."

Dave Brubeck (1920-2012) Blue Rondo Ã la Turk Dave Brubeck has long been recognized as an innovator in the world of jazz. This is truly evident on his legendary 1959 recording, Time Out, which features compositions written in a variety of complicated time signatures. You're not going to hear your typical 3/4 or 4/4 time when it comes to Brubeck. All of the charts featured on Time Out, from the tune we just heard, Blue Rondo alla Turk, to Strange Meadow Lark, throw conventional time signatures out the window. Brubeck fused classical and jazz music often throughout his career, not only with arrangements and allusions, as with Blue rondo, but also through collaborations with conductor Leonard Bernstein to combine the classical orchestra and the jazz combo into one performative unit.

Marcel Tournier (1879-1951) Jazz Band Marcel Tournier studied at the Paris Conservatoire and won the First Prize in Harp in 1899. Ten years later, his compositions placed second for the Prix de Rome and first for the Rossini Prize. In 1912, he took over as the Professor of Harp in the Conservatoire, replacing his teacher Alphonse Hasselmans. Considered a master of the harp in his time, he wrote pieces almost exclusively for the instrument, greatly expanding the repertoire and exploring new effects and tonalities which were inspired by typical French music conventions of the early 20th century, in particular Impressionism and jazz. Though he is mainly well-known among harpists, he was an inspiration for many composers including FaurÃ©, who wrote music specifically for Tournier to perform. As a teacher, Tournier wrote a treatise for the harp and trained two generations of harpists. His influence is still passed down through harp pedagogy today, particularly in the French school of harp playing.

Gunther Schuller (b.1925) Meditation (Symphonic Study) In the 1950s and 60s, Gunther Schuller advocated a school of composition he referred to as "Third Stream." This school freely drew from both jazz and classical vocabularies with neither subsuming the other-an idea we can readily hear in his piece Meditation, which combines elements of Second Viennese School atonality with figures from jazz music. Like Louis Armstrong, Schuller also had an impressive rÃ©sumÃ© as a brass player, though he played French horn, performing with the American Ballet, Metropolitan Orchestra, and Miles Davis. It was while performing the horn part to Stravinsky's Rite of Spring that Schuller met another great American composer who often borrowed harmonies and rhythms from jazz: Leonard Bernstein. Bernstein would later offer to conduct several of Schuller's works.

Louis Armstrong (1901-1971) That's My Home Though he spent years on the road touring, home for Louis Armstrong was New Orleans. His rise to mega-stardom in the early jazz world made New Orleans a fiery-red hot spot for jazz, and stoked a lineage of professional and famous jazz musicians from there that continues today. Blues-Rock singer Dr. John was just one of many New Orleans-born musicians who took inspiration from Armstrong. He memorialized him in his 2014 album Ske Dat De Dat: The Spirit of Satch, which includes several covers of Armstrong's most famous standard, such as the one we just heard. "Satch" refers to "Satchmo" one of Louis Armstrong's famous nicknames, although to his friends and other musicians he was simply known as "Pops." The Spirit of Satch would be Dr. John's final album. He passed away in 2019, ending a music career that spanned 70 years.