A Spring in Our Step 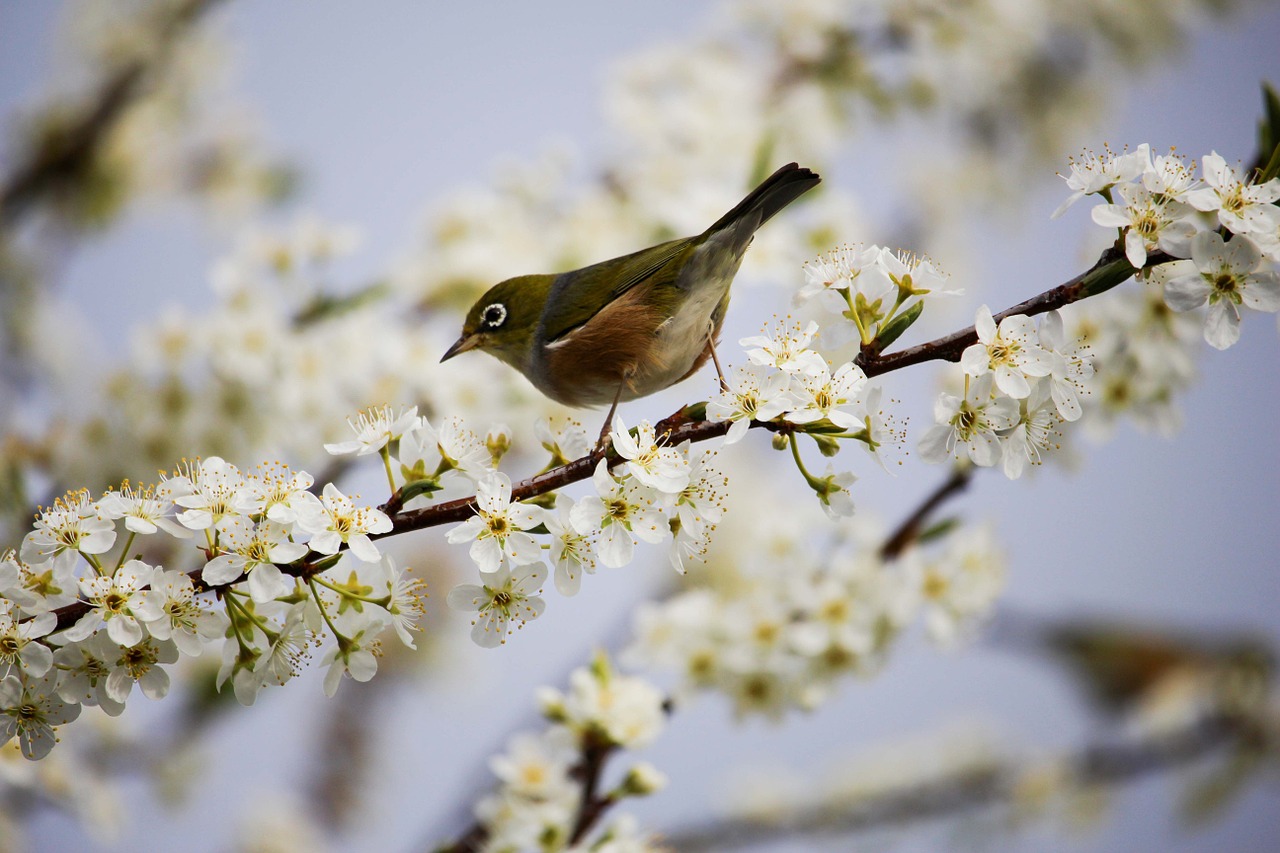 This week on Ether Game, It’s Spring Break for WFIU. We’re listening to classical music on the theme of Spring in celebration of the warmer weather, and the greening of earth around us.

Get ready, gamers, to watch the flowers bloom!

Copland, Aaron (1900-1990) Apalachian Spring, Very Slowly; Allegro, Appalachian Spring was the third of Aaron Copland’s great American ballets, and the first written for famed choreographer Martha Graham. Copland did not know the plot of the ballet when he began work on it, but simply knew that Graham wanted something with an American theme. Originally called Ballet for Martha, the ballet ended up being about a group of Shakers, a religious sect in Pennsylvania in the 19th century, and their springtime celebrations after building a farmhouse for a young married couple. The original ballet music from 1943 was for a chamber ensemble of 13 musicians. In 1945, Copland excised about 10 minutes of the ballet to create an orchestral suite for both chamber ensemble and full orchestra. In 1954, at the request of conductor Eugene Ormandy, Copland orchestrated the full ballet.

Igor Stravinsky (1882-1971) Rite of Spring; Dance of the Young Girls Stravinsky’s “Rite of Spring,” with its infamous depiction of a primitive human sacrifice, is best known today as a concert work. But the original work was a ballet whose revolutionary choreography by Vaslav Najinsky was as least, if not more, controversial than the music that accompanied it. In fact, it has been speculated that the riot that erupted when the Ballet Russes premiered the work in 1913 was entirely prompted by the choreography, as the audience became so unruly that hearing the music would have been nearly impossible! Stravinsky always composed at the piano, and the four-hand version of “The Rite” was not an arrangement, but rather a separate, alternate version that was published long before the full score, and which Stravinsky himself frequently performed, at one point with Claude Debussy providing the other two hands!

Strauss, Johann II (1825–1899) Voices of Spring Waltz Op. 410  In the 1870s, Johann Strauss Jr., the “Waltz King” of Vienna, began to ignore the musical genre that made him king in favor of the operetta. The idea came from the theatre directors of Vienna, who turned to Strauss (the best-known Viennese composer) to provide them with some new productions. At the time, Offenbach was the king of the Vienna stage, but the rights to perform his works came at an extortionate price. So Strauss began composing operettas, premiering fourteen in Vienna over the next several decades. While he never fully abandoned writing waltzes during this time, his waltzes became increasingly intertwined with his operettas. Many of Strauss’s late waltzes were based on his operetta themes. And this particular late waltz, the “Voices of Spring Waltz,” was written with an optional soprano melody. It’s sometimes even inserted into Strauss’s operetta Die Fledermaus as a showpiece.

Haydn, Franz Joseph (1732–1809) The Seasons: Spring The height of Haydn's career was marked by the success of his two magnificent oratorios, THE CREATION, and The Seasons. Not only did these enterprises pay off handsomely for Haydn, they were written at a time when his living situation was at its most comfortable. Haydn had complained for years about the remoteness of the estate in rural Hungary of his patron, Prince Nikolaus Esterhazy. By 1800, when he was composing The Seasons, he had managed to retire from that position and move to Vienna where the success of THE CREATION had made him a celebrity. Like The Creation, The Seasons features three soloists. Rather than representing biblical characters however, they play archetypal country folk. The libretto has no storyline in the traditional sense. Rather, the listener is guided through pastoral scenes according to each of the seasons.

Grieg, Edvard (1843-1907) Lyric Pieces, OP. 47 No.1 and No.6: The Butterfly and To Spring  It might be hard to believe that Edvard Grieg likely had not heard a strain of genuine Norwegian folk music until after graduating from the Leipzig Conservatory in 1862, where his music education had been steeped in the music of Schumann and Wagner. A meeting in Copenhagen in 1864 with a fellow Norwegian composer would change all that and start a new phase of his artistic life. Rikard Nordraak was a passionate supporter of an emerging nationalist trend in art and literature and introduced Grieg to contemporary works based on the cultural heritage of Scandinavia. Together, he and Grieg founded a music society devoted to the performance and promotion of Scandanavian music. The 68 Lyric Pieces for piano, published in 10 volumes are some of Grieg’s most popular works and reflect his Romantic nationalism, incorporating Norwegian folk melodies and often referring to nature, such as these 2 selections “To the Spring” and “Butterfly.”

Piazzolla, Astor (1921-1992) The Four Seasons of Buenos Aires: III. Spring Although later assembled into a suite, the four movements which make up Piazzolla’s Four Seasons of Buenos Aires were all originally written as separate works. “Spring in Buenos Aires” was written in the mid-1960s, when Piazzolla’s music was still not universally accepted in his own country. Many conservative music fans were highly suspicious of his attempts to fuse the tango with jazz and Western classical music. According to the composer, his music was so unpopular that he occasionally even had difficulty getting taxis to stop for him! Although bossa nova, a similar adaptation of traditional dance music, had recently taken off in Brazil, Piazzolla’s Tango Nuevo (or “New Tango”) was only belatedly accepted. Although Piazzolla’s “Spring” was not intended as a direct homage to Vivaldi, he does make reference to Vivaldi’s famous “Four Seasons” - by quoting the “fall” concerto! The seasons are, after all, reversed in the Southern Hemisphere.

Glazunov, Alexander (1865-1936) Vesna (Spring), OP. 34 Composer Alexander Glazunov began studies with Rimsky-Korsakov in 1879.  These lessons lasted less than two years. In Rimsky-Korsakov’s words, Glazunov was progressing “not from day to day but from hour to hour.”  By age 17, Glazunov’s first symphony and string quartet had received public performances. In 1887, Alexander Borodin unexpectedly died, and Glazunov, along with Rimsky-Korsakov, undertook the task of revising his unfinished works.  This task was aided by Glazunov’s prodigious memory. He was able to write down the overture to BORODIN’S Prince Igor after having heard the composer play it at the piano.  Glazunov’s “musical picture” titled Spring was written while the composer was working on completing Borodin's unfinished music.

Miyagi, Michio (1894-1956) Haru No Umi (Ocean in Springtime) The modernist movement developing in Japan in the late 1800’s incorporated many ideas from Western art, including music. This must have been an influence on Michio Miyagi, as he was not only taught many traditional Japanese musical instruments, but learned the organ and violin as well. As a performer however, it would be on the japanese zither called the koto that he became the most accomplished, earning the title of “grand master” in 1916 for his development of the instrument and performing koto on the first radio broadcast in Japan in 1925. Miyagi later was inspired by western musical thought to create several new traditional Japanese instruments, including a 17 string koto and even an 80 string koto. His compositions have entered standard repertoire in Japanese music, including “Haru No Umi” or “Ocean in the Springtime” which is transcribed for flute and harp on this recording

Richard Rodgers and Oscar Hammerstein (1945) It Might As Well Be Spring The songwriter duo Rodgers and Hammerstein wrote “It Might as Well be Spring” for the musical film State Fair, which was to be the only film they would directly write music for. State Fair is based on an earlier 1933 film, which in turn is an adaptation of a novel by Phil Stong. The 1945 movie musical is far more happy-go-lucky than the Stong’s darker coming-of-age story concerning the life of rural Iowans, where the tensions between city and country life is easily masked by Hollywood glamor. This song is unique in that it is the only Rodgers and Hammerstein song known to have an entire alternate melody, Richard Rodgers initial arrangement being far more legato than the highly syncopated final version. “It Might as Well be Spring” would go on to win an Academy Award for Best Original Song in 1946.