When Miami Temps Plunge Below 60, It's Time For Hot Churros 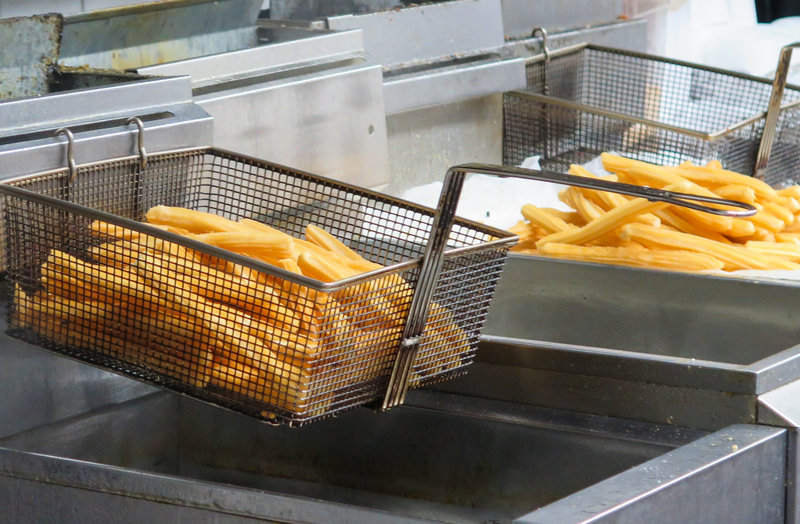 At La Palma Calle Ocho in Miami, the churros are pulled hot from a fryer, placed into brown paper bags and drenched in granulated sugar. (Greg Allen/NPR)

On a busy street in Miami this week, people have been lining up for a seasonal tradition—churros dipped in hot chocolate. While frigid air gripped most of the country this week, temperatures also dropped in South Florida. It was just under 60 degrees — which has people pulling out their sweaters and boots and going out for churros.

Churros, of course, are sticks of fried dough, covered in sugar, typically served with, and dipped into, a side of hot chocolate.

There are lots of places to buy churros. But in Miami, La Palma Calle Ocho, on Eighth Street, the long dough sticks are pulled hot from a fryer, placed into brown paper bags and drenched in granulated sugar. If you ask, you also get a small cup of dipping chocolate – so thick it's more like pudding than hot cocoa. The restaurant is widely acknowledged to be, if not the best place for churros, at least the most popular. But it's popular only at certain times of the year. That's when the weather turns cold, or at least cool.

Among those in line for churros were Carolina Bonilla and Kenny Perez. They drove in from Homestead, Fla., 30 miles away. They've been coming here for the last 19 years, since they moved to Miami from New York. Perez says, "It's kind of chilly today so we're like, 'Hey, you know, it's a vote to tradition.' "

Martinez, another person waiting for churros. "But just that cold brisk in the air is just enough to get everybody out and wear ... jackets and sweaters and scarves," she says. "And have that real thick hot chocolate that you only find here."

Churros are popular throughout Latin America, introduced there by the Spanish conquistadors. There are variations that can include putting fillings into the crispy, fluted dough sticks. In Spain at least, they're also eaten when the weather turns cold. In Miami, where cold weather is rare, people actually welcome a dip in temperatures. And they celebrate by going out for churros and hot chocolate.

At La Palma Calle Ocho, there are about 35 people in line on a recent evening, among them sisters Nickie Shaw and Veronica Toledo, who's wearing stylish black suede boots. "Yeah, she's got her boots on," Shaw says. Toledo says, living in subtropical Miami, "I have to take advantage, the one time of year" when she can wear them.

One of those waiting in line at La Palma, Rick Parish, has a special appreciation for the chocolate. "Velvety smooth," he says, "completely laced with the bitter dark chocolate that I love. It's a great tradition and — you can see the line here."

As the evening wears on, the temperature even drops into the 50s. And the line for churros? It just keeps getting longer.