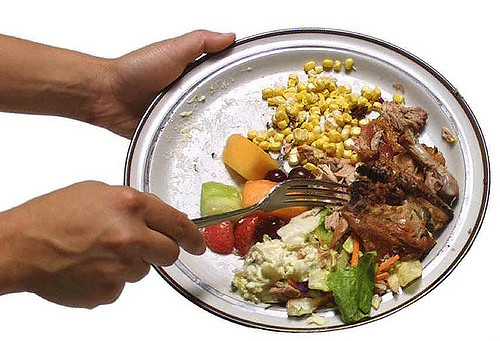 Senate Bill 3027Â is aÂ unanimous bipartisan measure signed into law by New Jersey governor Chris Christie last week. Its goals are twofold: to reduce the state's contribution to climate change, and to provide more food for the hungry by reducing the amount of food that ends up in landfills every year.

The law gives state legislators one year to come up with a plan for halving food waste by 2030.

About 40 percent of food produced in the U.S. ends up in the trash. All of that rotting food and produce emits methane into the atmosphere. It takes about 3.3 billion tons of greenhouse gases per year to process uneaten food â€“ not to mention the wasted energy that goes into producing it in the first place.

New Jersey legislature is also considering other bills to supplement the state's new food waste law. One billÂ requiresÂ supermarkets, restaurants and other large generators of food waste to separate discarded food from other trash and recycle it. Another establishes new food labeling standards to reduce waste and incentivize food donations.

At least five other states have similar laws that either ban organic waste from landfills or mandate food waste recycling,Â according toÂ a report by the Harvard Food Law and Policy Clinic.