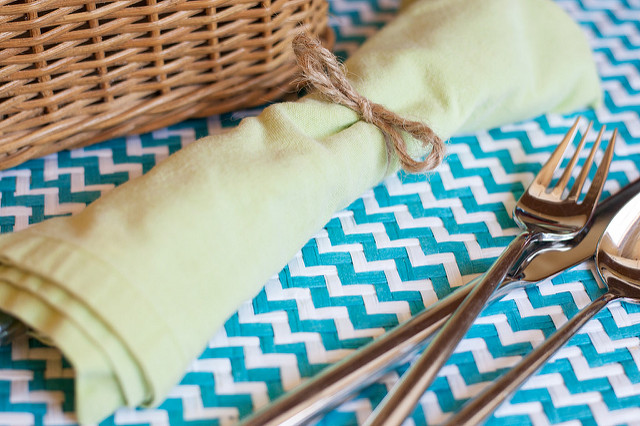 Yes, we're all guilty of buying or using disposable utensils and plates from time to time. In fact, revenue from disposable tableware sales increased from $178 million in 2014 to $191 million in 2015.

Between pies and potato salad, beans and banana pudding, tableware is often the last thing a host wants think about. Luckily, making the right choice (or at least a better one) is easy. There are two main factors to consider: production and environmental impact. Or, as Rednex once asked Cotton-Eyed Joe:Â Where does it come from? Where does it go?

Where it comes from: Conventional plastics can be made from a variety of natural resources, including cellulose, coal, natural gas, and, most often, petroleum. But just because they are derived from natural resources, doesn't mean they're healthy for you or the environment. It's a complicated process, but basically, the chemical units of plastic are linked together to form extremely strong carbon bonds called polymers. This process doesn't occur in nature, so there are no known natural processes to break polymers down. The plastic does start to wear down, though, after it's washed â€“ so conventional plastic tableware isn't safe to use more than once.

Where it goes: Despite your best intentions, conventional plastic utensils typically don'tÂ belong in the recycle bin after use. Typically,Â the higher the number inside the recycling symbol on the material, the harder that material is to recycle.Â Most plasticware is made from plasticÂ #6 - technically recyclable, but often not accepted by most recycling centers because it's not cost effective.Â

When they end up in a landfill, it can take up to 100 years to even begin to break down. If you have 12 people at your barbecue and each uses three pieces of conventional plastic cutlery, that's 3,600 extra years in a landfill. Yikes.

Where it comes from: Biodegradable plastics (aka bioplastics) are plant-based products made with polylactic acid, or PLA. They're typically made with fermented corn, but can also be manufactured using wheat, barley and potatoes. However, most of the corn they're made with is from genetically modified seeds. In fact, the largest producer of PLA is a subsidiary of Cargill, the world's largest provider of GMO seed.

Where it goes: Biodegradable plastics are considered "carbon neutral" in that it comes from renewable, carbon-absorbing plants, and they don't emit toxic fumes when incinerated. However, it takes a long time for PLA to actually break down, unless they are composted in a controlled environment. Most of us don't have an industrial composting facility heated to 140 degrees FÂ with a steady diet of digestive microbes. In fact, there are only 113 industrial-grade composting facilities in the U.S. Without those conditions, PLAs can take between 100 and 1,000 years to decompose in a landfill.

Where it comes from: Wooden flatware comes from trees, of course. The problem isÂ wooden utensils require trees to be cut down for production. Many wooden utensils are made from fast-growing species like bamboo and birch, or from leftover trees from the lumber industry, and that cuts down on the environmental impact.

Where it goes: Wooden utensils are not only compostable, they can compost right in your own backyard pile in as few as 90 days. If wooden flatware ends up somewhere it's not supposed to â€“ like the ocean, for example â€“ it won't take nearly as long or emit methane like its plastic counterparts.

Wood is also more durable than plastic flatware, so if you're inclined, wood utensils can safely be washed and used again several times. Though more expensive than plastic options, wooden tableware gets you more bang for your buck and less carbon for your footprint.

The Future of Flatware

The safest bet is, of course, reusable utensils. It might be a pain to wash and reuse your everyday flatware, but the energy and impact of washing your dishes is far less than adding more plastic to a landfill.

Even if you go to a cookout with unsustainable disposable flatware, you can bring along your own reusable flatware in a travel case, and encourage others to do theÂ same.

Maybe one day our flatware will become part of the meal, but for now, your best bet is to stick with the silver, or choose wood over plastic.