Make Your Own Vegan Mayonnaise 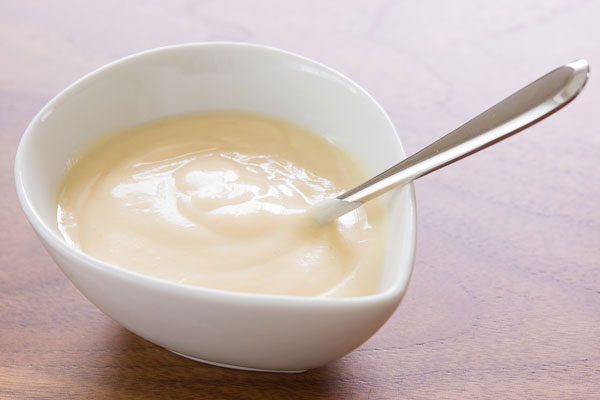 Most vegan mayonnaise involves pureeing tofu with some vinegar and salt. While it may look a bit like pale mayonnaise, it takes a stretch of the imagination to taste anything other than seasoned tofu. Typically these vegan substitutes lack richness, umami and color and unsurprisingly have that vaguely astringent tofu taste.

It felt like there had to be a better way to come up with an egg-less substitute for this popular condiment. After making about 12 batches, I've finally come up with a vegan mayonnaise that I think will fool almost anyone in a sandwich.

The first thing you have to understand is the science behind how real mayonnaise is made. While it's well known that oil and water don't mix, if you've ever made mayonnaise at home, you know that there are some exceptions. That's because of a class of additives called emulsifiers, which encourage the suspension of one liquid in another (i.e. oil and water).

In the case of mayonnaise, egg yolks serve as the emulsifier. They contain a compound called lecithin, which is what gives it its super power of combining oil and water. But eggs aren't the only food that contain lecithin. Soybeans are an abundant source of lecithin which is what gave me the idea for this vegan mayonnaise.

By using soy milk, as an emulsifier I was pretty sure it would be possible to make a vegan mayonnaise that was rich, creamy and flavorful. My first attempt didn't go so well. A one to one substitution of egg yolk to soy milk did not provide enough lecithin and I ended up with an oily mess. For batches 2-4 I tested different ratios and finally found a quantity of soy milk that would create a smooth creamy emulsion.

The vinegar reacting with the proteins in the soy milk helped thicken the mixture up a bit, but it was still way too loose to spread. Not easily deterred, I thought about it a bit more and my thoughts wandered to tofu. Tofu is made by adding a coagulant to soy milk and heating it, which sets the curd.

I poured my loose mayonnaise into a double boiler and heated it. The result was a thick custard, but due to the oil in the mayo, it had curdled. To thicken it needed to be heated to about 170 degrees F. The problem is that it started separating at about 160 degrees F. After a couple more tries, with different temperatures and times, I decided I needed another approach.

Rather than coagulating, I decided to try and thicken it using a starch. The problem is that most starches need to be heated above 160 degrees to gel, but on batch #12, I had success with tapioca, which begins to set at 145 degrees F and is fully set by 149 degrees F. My mayonnaise had a thick spreadable consistency and a lip-gloss shiny sheen.

While I could have stopped there, it was still missing something. The texture and flavor of my vegan mayo were pretty close, but the color was ghostly pale, not the warm creamy color of mayonnaise. I started thinking about the warm colored ingredient that I have in my kitchen. Turmeric or saffron would certainly do the trick, but they both have their own flavor. Mustard would add color and has the added bonus of being an emulsifier itself, but I was trying to make mayonnaise, not dijonnaise.

And that's when it hit me. In my stash of vegetable powders, I had some freeze dried corn powder. It not only gave the mayonnaise a warm yellow glow, it added a natural sweetness that eliminated the need to add sugar. Best of all, it's loaded with glutamic acids, giving the vegan mayo some much needed umami without adding any three letter chemical additives.

It took 13 batches to get it right. In a sandwich, I don't think anyone would be able to tell the difference between this vegan mayo and the real thing. Even by the spoonful, you'd have to have a pretty sophisticated palette to be able to identify this as vegan.

Make Your Own Vegan Mayonnaise