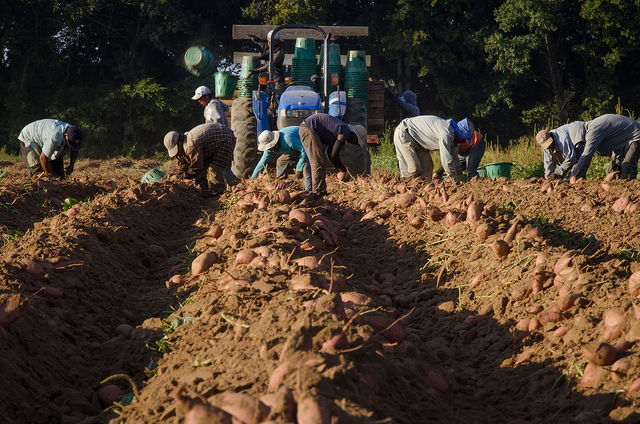 President Trump announced last week plans to build a $25 billion 1,933-mile wall along the U.S.-Mexico border, aimed at curbing undocumented border crossings. Trump has long promised U.S. citizens they will not pick up the tab. Instead, he proposed a 20 percent tax on all Mexican imports.

But that plan doesn't exactly add up.

"The irony of putting a tariff on Mexican goods is that, to the extent it raises consumer prices in the US, consumers will be paying for the wall, not Mexican producers," co-director of the Tax Policy Centre, William Gale, told USA Today.

Here's why: the U.S. imports a lot of food from Mexico â€“ about $21 billion worth. According to the U.S. Department of Agriculture, Mexico is the biggest exporter of fresh produce to the U.S., accounting for 70 percent of our vegetable imports and 40 percent of our fruit imports.

Ultimately, a 20 percent tax on Mexican imports would be rerouted to your wallet â€“ requiring Mexican growers to pay more for exporting their goods to the U.S. will only lead to higher prices on those products for American consumers.

Why not just buy American-grown products? Well, the U.S. imports food from Mexico for many reasons, among them cheaper labor costs that keep prices at the grocery store low, and a climate much more conducive to growing high supplies of certain products.

Here's a list of products likely to be most affected by the tax:

The wall will also have dire consequences for migrant farm laborers and the American farmers who rely on them. This will also contribute to higher prices for domestically-grown products.

Mexico Can Tax Us, Too

Mexico is one of the top three markets for U.S. farm production, and could also respond to Trump's wall tax with a tax of their own. The U.S. exports a variety of agricultural products like corn, soybeans, and distillers dried grains (DDGs, and ethanol byproduct). Some experts say Mexico would be able to target certain U.S. states and their legislators who support President Trump.

"They can threaten tariffs on corn from Iowa, and see if Sen. Grassley doesn't change his mind on an issue,"Â Robert Blecker, professor of economics at the American University in Washington D.C., told Salon.

Press Secretary Sean Spicer issued statement via twitter saying the tax was merely "one idea" to fund the construction of the wall.

So far, the Trump administration has not offered any alternative proposals for funding the wall, saying they're okay with being reimbursed by Mexico at a later date.

Mexican officials have refused to pay for the proposed wall.