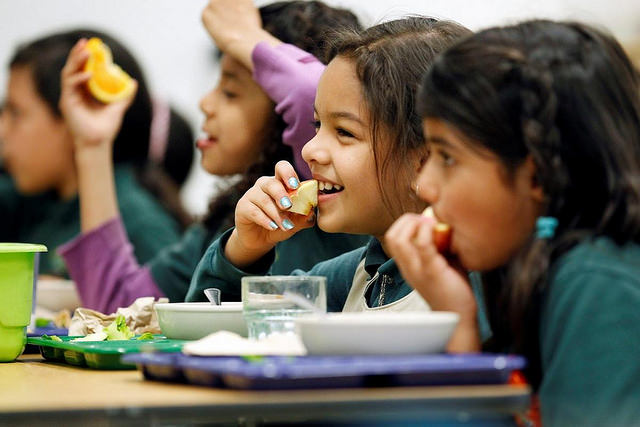 The U.S. Department of Agriculture is requiring districts to adopt policies this month for addressing meal debts and "lunch shaming."

Free and reduced-price meals are funded by the National School Lunch Program for kids from a family of four that earns less than about $32,000 per year. But data shows that not all kids who qualify for free or reduced-price lunches are signed up, and families who earn just above the $32,000 mark are most likely to accrue lunch debts.

A 2014 federal report found 39 percent of districts nationwide hand out cheap alternative meals with no nutritional requirements and up to 6 percent refuse to serve students with no money.

Before, addressing children without money to pay for lunch had been up to individual states and school districts, without federal oversight. School districts will now be required to outline how they plan to handle lunch debts and communicate their policies to staff and families by the beginning of the school year.

New Policies Around The County

Earlier this year, New Mexico became the first state to outlaw lunch shaming. Aided by nonprofit advocacy groups like Appleseed, legislators passed The Hunger-Free Students' Bill of Rights Act, which requires that all students have access to the same lunch.

The California Senate in May unanimously approved a bill that prevents schools from denying lunch if a parent or guardian has not paid.

The USDA's new policy doesn't specifically outlaw lunch shaming through cold sandwiches or debt reminders, so districts can still opt to use those tactics. But the agency hopes to keep students from bearing the brunt of lunch debts by working more closely with parents to address delinquent accounts.