Uncertainty Ahead For Government Climate Research 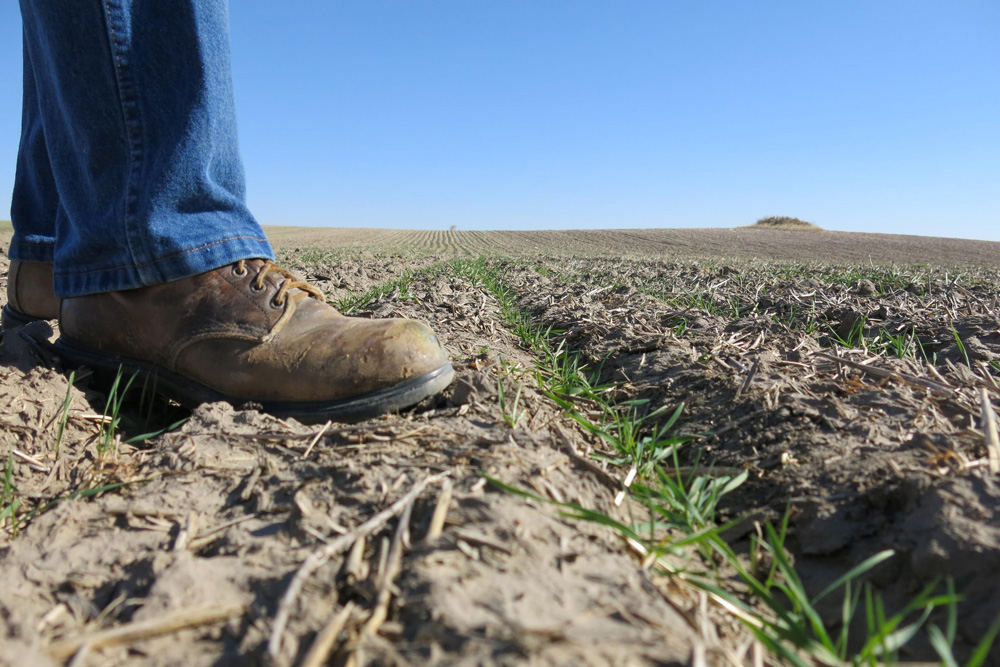 Farmers and ranchers, with their livelihoods intimately tied to weather and the environment, may not be able to depend on research conducted by the government to help them adapt to climate change if the Trump Administration follows through on campaign promises to shift federal resources away from studying the climate.

Farmers stand to lose a lot if worst case climate projections come to pass. They are likely to face extreme swings in temperature and precipitation. Pests and crop diseases will show up more frequently. Heat stress could stunt meat and dairy production from the nation's cattle herd, costing farmers billions of dollars in lost revenue and forcing food prices to rise.

Given the scope of the problem, the search for novel ways to adapt to a changing climate is driving agricultural research. The new administration in Washington D.C., however, is attempting to change not just the direction of climate research, but also the tone and rhetoric around the issue.

For more than a decade, the federal government has taken on a large role directing and funding climate change research, spending more than $11.6 billion on climate research in 2014, an increase from just $2.4 billion in spending in 1993, according to the U.S. Government Accountability Office. Former President Barack Obama made climate change adaptation and preparation a signature issue, rolling climate goals into policies across the government.

A high-profile Obama-era initiative specifically focused on the food system came in the form of U.S. Department of Agriculture research centers known as “climate hubs.” The hubs are meant to better coordinate USDA research and outreach, and after their creation in 2014, researchers set about translating scientific jargon into real-world advice for farmers, ranchers and foresters on how best to survive more erratic weather and a hotter climate.

The Agriculture Department established nine hubs across the U.S., and put one devoted to Caribbean adaptation in Puerto Rico.

In Fort Collins, Colorado, the Northern Plains Climate Hub operates out of a squat, beige building, hidden behind a row of greenhouses. The center's director, agricultural economist Dannele Peck, says her team is doing the work necessary to keep America's farmers and ranchers productive as climate change upends their operations. And unlike other industries that could suffer losses in a hotter climate, Peck says farmers are already primed to start having conversations and changing certain practices now.

“When you walk into a local diner what are they talking about? The weather,” Peck says.

Peck's region -- which includes Colorado, Wyoming, Montana, Nebraska, North Dakota and South Dakota -- is an agricultural powerhouse. Dairies are sprouting up and growing in Colorado, Nebraska and South Dakota, while beef cattle feedlots dot the landscape throughout. In crop production, the Dakotas rank high nationally for production of field crops like oats, wheat, sunflowers and dry beans.

To keep up the pace of food production in those areas, farmers and ranchers will have to make changes, Peck says. And it's the USDA's responsibility to help them adapt.

“One part of the hub's creation was just to make us more efficient,” Peck says. “If we have many, many different people working on weather and climate issues and they don't talk to each other you get redundancy or duplication.”

While the Climate Hubs were set up under the Obama administration, they're now under the purview of a new president in Donald Trump, who has repeatedly called global warming “a hoax.” He excoriated Obama during the Paris climate talks in 2015, taking to Instagram to call the former president's interest in climate change as a national security issue, “ridiculous.”

Trump's new USDA secretary Sonny Perdue is now overseeing the agency's climate change projects, including the 10 Climate Hubs. He doesn't deny climate change is happening, but injects seeds of doubt about humanity's role in causing it.

“I've been on a farm since the early [1950s] and I can tell you the climate is changing,” Perdue says. “But the fact of what the cause of it is really what is in dispute.”

Nearly every climate scientist in the world disagrees. So do portions of the USDA's website that say unequivocally climate change is human-caused. But similar statements are slowly being scrubbed from other federal websites, leading some to question the Trump administration's commitment to well-established climate science.

“Farmers care about this a lot,” says Roger Johnson, president of the National Farmers Union, a left-leaning farmer advocacy group. He was a North Dakota farmer for the majority of his life.

“What farmers really want is good, solid scientific information about how they can better operate their farms and ranches,” Johnson says.

With equivocation or outright denial of the facts about climate change from those in charge of the country's top scientific and regulatory agencies, that solid scientific information from publicly-funded scientists is in jeopardy, Johnson says.

“It looks really fuzzy right now,” he says. “It looks like there's a bunch of science deniers, climate deniers that have largely been installed in high levels in this administration.”

The federal budget, which was passed in May and funds the government through the end of September, maintains or even boosts most scientific research funding. But Charles Rice, a soil microbiologist at Kansas State University, says the administration's rhetoric also matters. Rice has received USDA grants to look at how farmers might adapt to a hotter climate and says any pause in current research could have drastic effects down the line.

It takes 20 or 30 years to develop a new crop variety and so even a short term reduction or priority change will have a long-term implication on research for plant development.

“There is a general feeling of concern,” Rice says, “particularly for those agencies that have direct roles in climate change research and monitoring.”

Policy changes implemented now will lead farmers in a direction that will play out over the next few decades.

“It takes 20 or 30 years to develop a new crop variety and so even a short term reduction or priority change will have a long-term implication on research for plant development,” Rice says.

Rice is worried about a scientific “brain drain,” and has worked with graduate students interested in climate change adaptation seeking to continue their education or work outside of the U.S.

The Trump administration will find it difficult to cut funding for climate change research across the board. Federal agencies under Obama rolled adaptation into many different aspects of their work and there is no master list of climate change programs. According to former Obama administration officials, some initiatives purposefully avoided using the word “climate” in order to avoid Congressional budget cuts.

Sally Rockey, director of the Foundation for Food and Agriculture Research, which relies on federal money for a portion of its funding, says climate change adaptation will continue to be a driving force within agricultural research, despite the skeptical tone coming from the executive branch. What might change, however, is what it is called. Climate research may be rebranded under the more vague umbrella of “sustainability.”

“At the core of many of the things we do are sustainability, and sustainability is a lot about climate,” Rockey says. “So the two are intertwined in almost every program we do.”

Federal projects with a climate change focus and the word “climate” in their name -- like the USDA's Climate Hubs -- will likely be under the microscope. Agriculture Secretary Perdue says it's too soon in his tenure to say what he wants the hubs to achieve.

Perdue says his office will be looking at how the hubs came to be. And he says if they are found to have an ideological bent, or come from a “politically correct position,” USDA might find a, “better way to research.”