These Iowa Farmers Are Offering Weekend Getaways In Their Dairy Barn 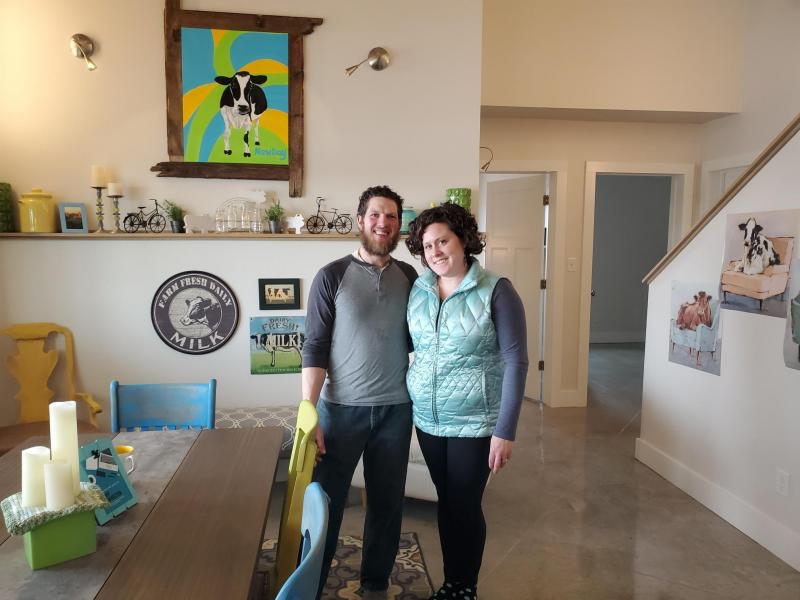 Many dairy farmers have struggled in recent years, causing some to rethink their business. One dairy in Iowa is inviting visitors to spend the night in the barn.

It’s fairly easy to find a bed and breakfast somewhere in Iowa that’s housed in a former dairy barn, but New Day Dairy GuestBarn may be one of the very few where you can actually spend the night in a guest room at a working farm overlooking the cows.

Lynn Bolin and her husband Dan operate the dairy farm near Clarksville in Northeast Iowa. It’s a dairy that invites visitors to almost literally sleep with the cows.

“I grew up in the city and so when I married Dan, I was introduced to the farm life and when came back to the farm after living abroad and traveling around the world, we realized that we wanted to share a piece of the farm with others," Lynn Bolin said. "And so when we were building our new farm facility in 2015, this idea kind of came to be.”

The Bolins represent a growing number of Iowa dairy producers trying to match their income with the cost of production.

David Brown, dairy program manager for the Iowa Department of Agriculture, said they’re battling low milk prices, large supplies, and lost export markets. On top of that many consumers have taken traditional milk off the menu, especially for breakfast.

“They grab a protein bar or something and out the door they go, they just don’t have, like we used to when we were younger, we sat down with the family and all our brothers and sisters, now that’s changed quite a bit,” Brown said.

Another thing that’s changed is many dairies have now incorporated robots to help on the farm.

“We have five different types of robots in the state of Iowa and it’s a way for these younger families to have a family life. Let’s say their daughter or their son has a concert or a basketball game or whatever, they have the opportunity to go to those now, the robots, the automation, frees up some family time," said Brown.

“And Rita is really better than any employee because she’s 24/7, all the time, consistently exact, milking the cows which is great for the cows and great for me,” he said.

And Lynn Bolin added those who stay at the guest house can see Rita in action.

“Because in the loft space, there’s two large loft windows that look directly into the barn, so it’s 24/7 cow gazing, and at 3 a.m. if you get up to go to the bathroom, you can wander out and find out what the cows are doing," she said. "We have six cows that are painted six different colors so that you can follow where they’re going in the barn and kind of their life. Because even those each one of our cows has a name, I don’t even know each one of them by looking at them."

And if just looking at the herd of 150 cows isn’t enough, guests can take on the 90-minute “Be a Dairy Farmer Challenge.”

"It’s basically walking with me and getting up close and personal, said Dan Bolin "It's probably scratching a few cow heads, patting necks, and getting licked.”

Guests will also get a chance to get their hand dirty feeding a bottle to a newborn calf, scraping manure off walkways and cleaning the barn.

The Bolins welcomed their first overnight guests in January and Lynn says in the coming months they hope to triple the space with two additional bedrooms and baths.

“And so through the summer we’re hoping to reach a 30% occupancy, kind of this summer into next fall once we have all of the spaces open and then grow by 10% the next two years with a 50% occupancy, which is an industry standard a lot of times in that lodging,” said Lynn Bolin.

Some other Iowa dairy producers have been able to grow their operation by using the milk to make cheese, ice cream and butter. All hoping to avoid being like one of the 3,281 dairy farms that went out of business last year.