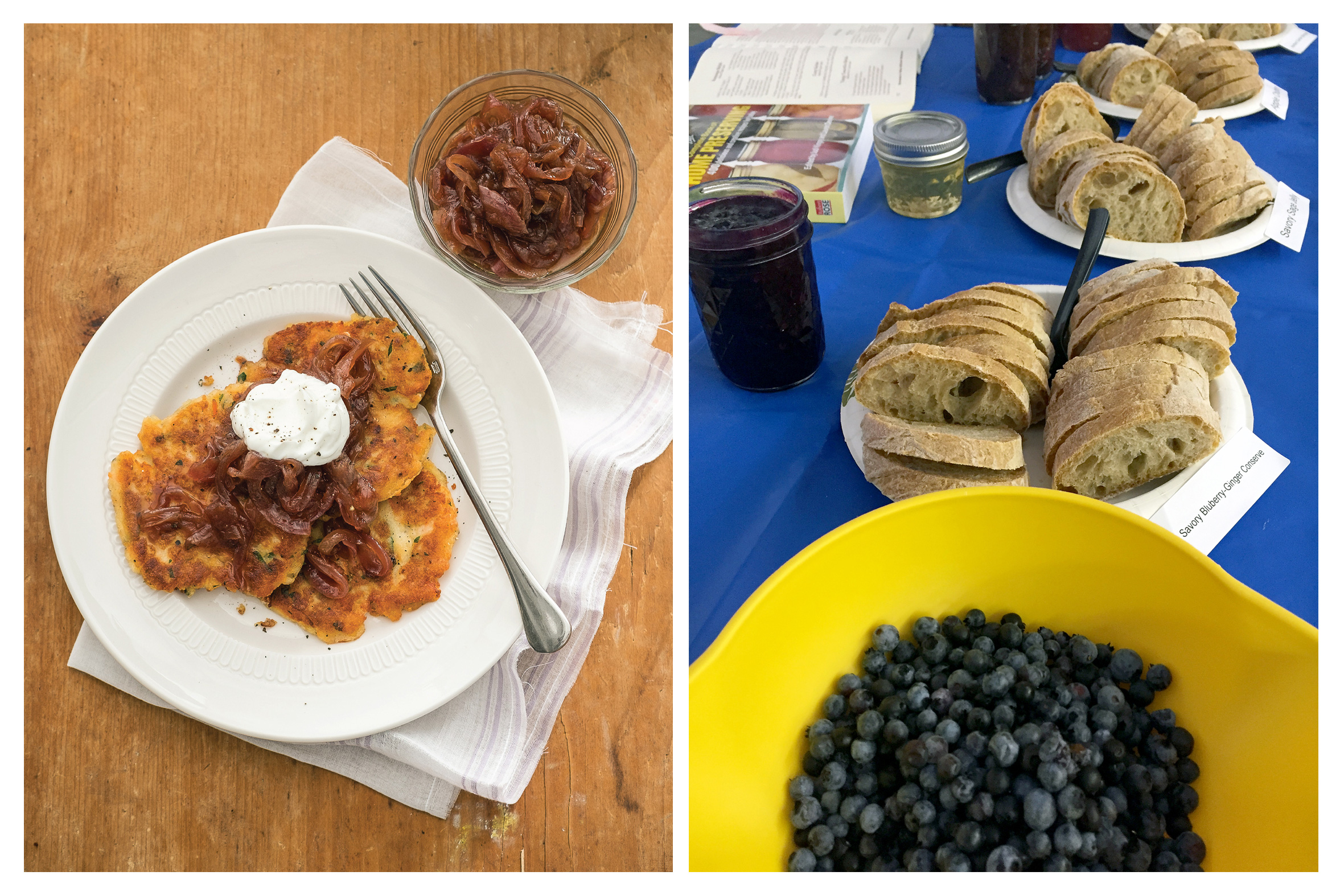 On a blisteringly hot day at the state fairgrounds in Skowhegan, Maine, Kathy Savoie takes some local blueberries and simmers them in a pot.

Clearly, what she calls "savory blueberry ginger conserve" is not your grandma's blueberry jam.

"You take a grilled cheese and then you use some nice local sourdough bread, some nice local cheese and then smear a little bit of savory jam or jelly on there as a spread, and it's a whole different taste experience," says Savoie, who is a home food preservation expert at the University of Maine Cooperative Extension in Falmouth.

So-called "savory jams" are experiencing a surge in popularity. Savory jams overtook Sriracha as the fastest-growing condiment for sandwiches and burgers — with bacon jam leading the pack — in 2015, according to Datassential, a market research company that studies menu trends. Tomato jam — aka classy ketchup — came in second.

Jams made with peppers of all degrees of hotness, flowers and extracts of things like Earl Gray tea and parsley are also growing in popularity.

When it comes to today's jams, says Marissa McClellan, author of the new cookbook Naturally Sweet Food in Jars, "You have to think beyond toast."

Savory jams have a lot of things going for them in the current foodie landscape, says jam maker Savoie. Savoie gave the blueberry ginger conserve cooking demonstration at this year's Kneading Conference in July.

The central component of jam is pectin, a natural thickening agent found in many fruits. Traditionally, jam was made by cooking down sugar and fruit. Pectins in the fruit would mix with the sugar, causing a gel to form. Typical jam recipes start with about eight cups of fruit and six cups of sugar, which becomes about 67 percent sugar by weight when cooked down.

"It's a lot of sugar," says Elizabeth Andress, director of the National Center for Home Food Preservation at the University of Georgia in Athens.

In the early 1900s, it became possible to buy pectin from the grocery store. But those pectins were still loaded with sugar. Many years later, in the 1980s, some companies introduced sugar-free pectins that promoted gelling with chemicals like calcium. Jam makers could now attain a jam-like consistency — but with considerably less sugar.

Meanwhile, in France, chefs ushered in today's sweet-savory frenzy with the introduction of salted caramels. Jam would never be the same.

Now, examples of avant-garde jams abound. At Baltimore Maryland's Blacksauce Kitchen, for instance, a mobile food and catering business dedicated to all things biscuit, owner Damian Mosley wanted to extend the life of his seasonal rhubarb supply while staying true to his BBQ roots.

"I decided one day to see what would happen when I smoked a boxful of rhubarb and turned it into jam," Mosley says. "Much to my amazement, it held onto the smoke."

But what makes a jam a jam? Perhaps the most straightforward definition comes from Thorn. "Just cook something down with sugar, add some pectin, and boom!" says Thorn. "Jam."

But others believe that a proper jam must also be preserved or canned. "People tend to call anything that's just a thickened spread a jam," says Andress. Nobody, for instance, advertises a sandwich with a slathering of "onion sludge."

The issue is more than semantic. Reducing sugar means less gelling and more water, a breeding ground for pathogens such as E. coli and Listeria. Reducing or eliminating fruit, meanwhile, lowers acidity, which can increase the likelihood of botulism, a serious foodborne illness. Preserved jams with a pH higher than 4.6 are not safe for consumption. Andress worries that calling any jam-like spread a jam obscures this crucial safety message.

For jam purists or home cooks keen on preserving the produce from this summer's bounty, going with an established recipe is the safest bet. But it's not always desirable to make a savory jam canning-safe by adding excess acid, such as vinegar or lemon juice, because that can lead to the liquid separating from the gel, a condition called weeping.

When canning, Savoie explains, it's important to listen for the telltale pop, a sign that the canning process has worked. If the process fails, you can repeat the laborious undertaking, or just throw the end result in the fridge and spend the next two weeks slathering it on meat, coupling it with funky cheeses, and handing it out to your neighbors, Savoie says.

Or maybe, go retro, and put it on some toast.

Here's a recipe for caramelized red onion jam from Marissa McClellan's cookbook. (I tried this jam during Savoie's talk and it made me swoon a little).